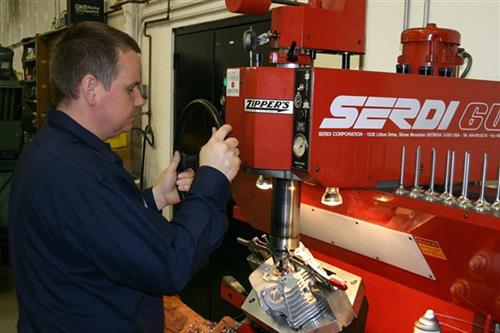 I have been using Zippers Performance Products for a very long time and some of you may have seen one or more of the Tech Articles I have written about installing their products on my personal motorcycle or that of a friend’s.

Dan Fitzmaurice and I go back a long time, and I have met some of the people who work for Zippers at motorcycle events and shows around the country. But for one reason or another I have never been able to stop by their facility in Elkridge, Maryland.

Zipper’s Performance will be set up in a NEW location this year for Delmarva Bike Week. Zipper’s booth will be set up at the Ocean City Convention Center, September 17th – 20th.

Talk to Zipper’s about the latest in their engine kit development including Muscle Kits, Zipper’s CNC heads, Red Shift Cams, ThunderMax and more.

Zipper’s cushion-drive chain conversion kit for 2009-up Touring models is for high output engines, with a modular design for strength and easy ratio changes. This kit is supplied with a steel front sprocket, a 7075-T6 aerospace aluminum rear sprocket, and O-ring chain (available in standard metallic, gold, or black). Our cushion-drive chain conversion kit is equipped with a chrome-moly axle and severe-duty slider-style chain adjusters, eliminating the cam adjusters. Conveniently, this system bolts-on and does not require modifications to the swing-arm. Contact Zipper’s today for any additional inquires about this kit.

Zipper's has now made a version of its Hammer 88 big bore kit available for use on Harley-Davidson's XR1200 Sportster.

The kit, which maintains the engine stroke but converts the engine to a 'square' configuration by increasing the bore, is offered in two versions; one with emphasis on the lower and middle ranges of power. For big torque figures, the other provides an emphasis on the upper end of the RPM scale creating big horsepower.

The heads feature CNC-machined combustion chambers to match the pistons. Special hardware and a full gasket set are also included.

Finishing the kits off is the inclusion of high flow injectors, an air filter element and a pre-mapped ThunderMax EFI management module for simple plug-and-ride tuning.

HiFlow air filter kits by Zipper's Performance Products are similar to the MaxFlow air filter kits except the filter is the standard 2-1/4" deep. This filter kit increases flow without increasing the overall width of the air cleaner for those with leg room concerns. Bolt it on and feel the difference! Click here to learn more.

Is your bike already equipped with a factory Stage I performance air cleaner? Raise the level another step! Zipper's MaxFlow Stage I Upgrade Kit includes a specially designed, 100% washable pleated fabric filter made from multiple layers of surgical-quality cotton gauze material that traps the smallest dirt particles while providing dramatic flow increases. The element is 5/8" deeper than the factory performance filter it is designed to replace yielding over 60% more surface area than the Stage I filter. Takes about 5 minutes to install – the difference is immediately noticeable! Click here to learn more.