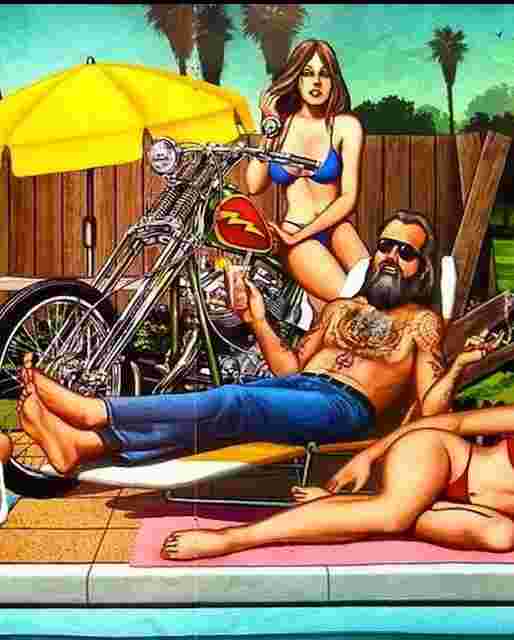 Remember, we’re living in the best of times, but the control freaks need more control.

Keep the faith, the bullshit and bullies are losing their grip. Let’s ride free forever!

Click Here to Read the Weekly News on Bikernet.com

Kirk Taylor’s 2018 Strider Custom is back 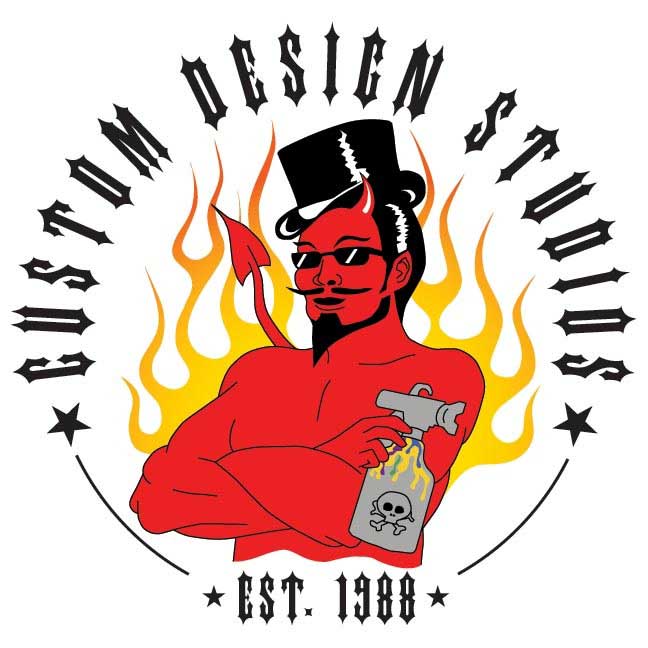 Kirk Taylor’s L’il Cha Cha was among the very first class of Tiny Strider Customs, a program of the Flying Piston Benefit that supports All Kids Bike – an organization that’s on a mission to teach every kid how to ride a bike as part of kindergarten PE class.

Custom creations are unveiled at the Flying Piston breakfast in August at the Sturgis Buffalo Chip then auctioned at the Mecum motorcycle event in Las Vegas the following January. Proceeds fund bike-riding programs for elementary schools.

Ride to Sturgis and back Home 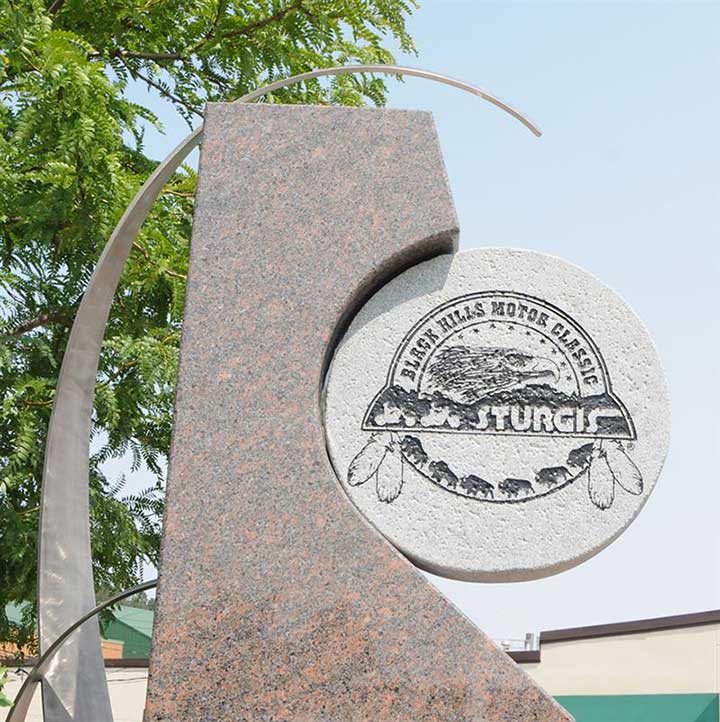 Photos and text by Rogue

I have been riding to Sturgis for over 30 years. Back when I was with Easyriders, I left after work on Friday, rolled onto the interstate, leaned over into the left lane and hit it. During those days I rode a performance-engine, rigid frame, Harley.

I actually made it to Sturgis from Florida in two days one year, but ended up sleeping the entire next day. I changed it to a three-day ride in the future.

The Weirdest Year Yet: The 2021 Sturgis Buffalo Chip Lost & Found 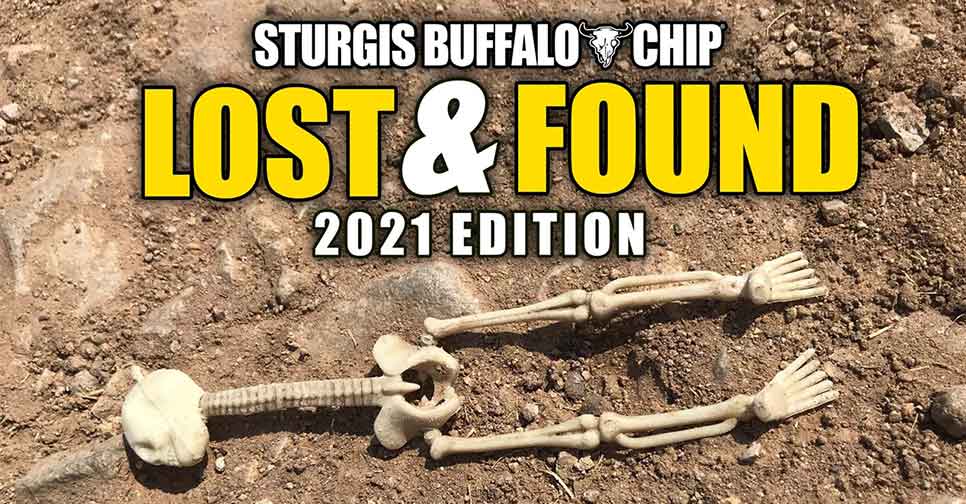 by Mary Panerio from https://www.buffalochip.com

That’s a wrap! The 40th anniversary of the Best Party Anywhere® has officially come to a close, and the last camper has rolled off Sturgis Buffalo Chip® property. Now that the dust has settled on nine days of good times during the 2021 Sturgis Rally, the only thing left at the Chip is this question…

That’s because 140 of the most head-scratching items ever collected have made their way into the venue’s lost and found. Check out all the weird and wild stuff left behind and see if you can help the Chip find its rightful owners.

CLICK HERE to See the Photos of the Lost and Found from Sturgis. 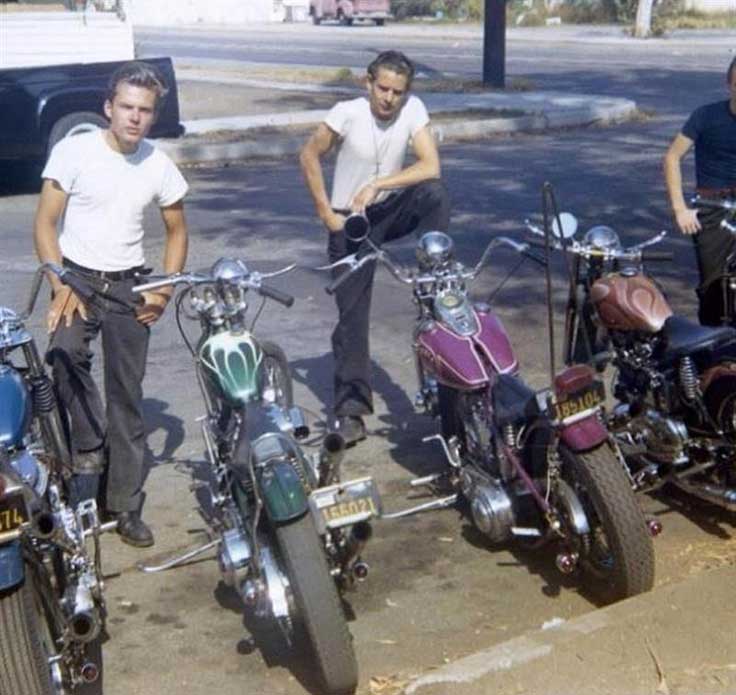 Legislative Motorcycle News from Around the World

Click Here to Read the NCOM News on Bikernet.com 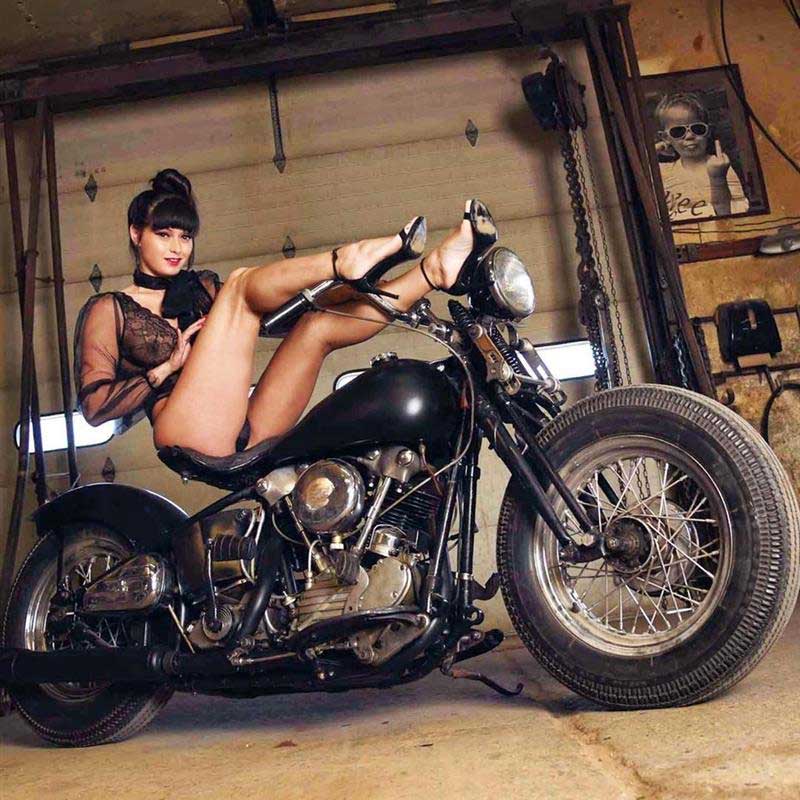 The rally is over. I’ve heard incredible numbers.

A collaboration between Keith “Bandit” Ball, Whiskey River Art, and Support Good Times. Available in black or white, with choice of front or back print on 6.1 oz. 100% preshrunk cotton.

Bikers may see caricatures of themselves in a weeklong mural that will disappear after the 81st Sturgis Motorcycle Rally.

Oleg Satanovsky, product communications manager at BMW, said this is the first year BMW has been in Sturgis and wanted to do “something cool.”

“We’ve never really had a motorcycle that fits as a cruiser,” he said. “Last year we would’ve been here for the first time, but COVID-19 got in the way. Finally we were able to take everything, everything’s been packed up and we were waiting for it to start up this year.”

Satanovsky said people can submit photos by tagging BMW on social media. Throughout the week, an artist will add caricatures to a mural that features a BMW motorcycle and a rider in black and white spray paint.

Two artists from New York worked on the mural, along with another artist who works on caricatures.

After the week is over, the mural will disappear from Sturgis, but it’ll be online.

BMW isn’t selling anything at its stand on the northeast side of Main Street in Sturgis, but it is displaying its new R 18 model motorcycles.

Satanovsky said people are welcome to test drive the new model. Those who don’t have a license but are interested in the new model can sit on a bike that’s held on a stand.

“You can start it up, feel like you’re riding it, shift through the gears and learn how the motorcycle works without having a motorcycle license,” Satanovsky said.

The mural will be on display at the BMW stand on Main Street in Sturgis through Saturday. 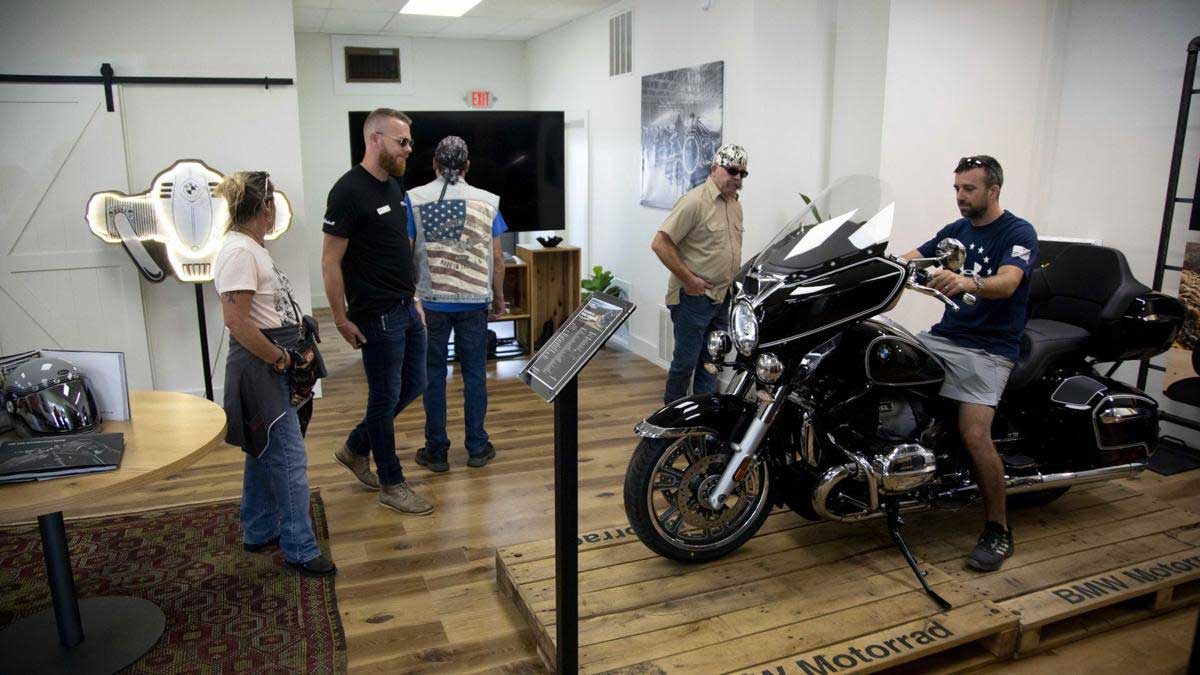 Gov. Kristi Noem is the new star at the 2021 Sturgis Motorcycle Rally 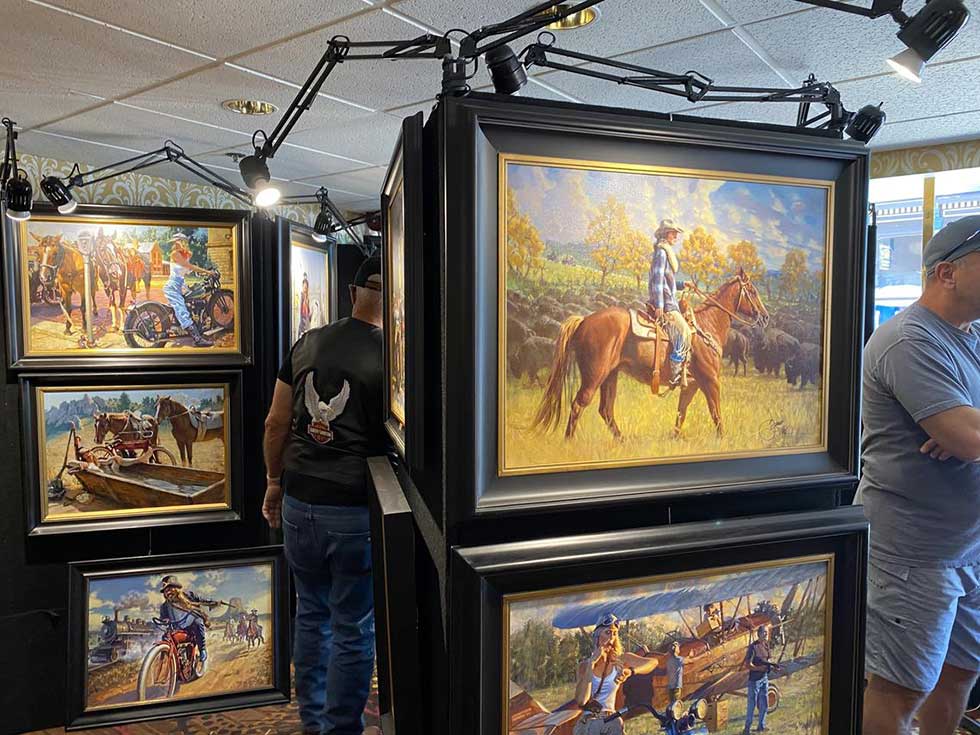 Noem rode both a horse and a motorcycle at the Rally on Monday, helping sell an oil painting of her for $55,000 in a charity auction. Staff says this was Noem’s first time at the massive western South Dakota biker bash.

On Monday, Aug. 9, the conservative firebrand auctioned off “True Grit,” an oil painting showing the governor on a horse during Custer State Park’s annual Buffalo Roundup.

The charity auction in Deadwood, South Dakota, was in the heart of roaring Harley-Davidsons and the 81st Sturgis Motorcycle Rally. Next, Noem rode 50 miles on a denim blue Indian motorcycle into Vanocker Canyon and eventually out onto the plains of the Buffalo Chip campground.

“South Dakota is getting recognition that it’s never got before,” said Rod Woodruff, owner of the Chip, seated in a tent next to Noem in her signature baseball cap Monday. “And it’s a direct result of the respect this governor has for the freedom and liberties of the citizens.”

The governor followed up on her nostalgic vision of Sturgis.

“They can come here and remember what America feels like,” Noem said.

Had there been a crowd, they would’ve revved their hogs.

The Black Hills, the most conservative corner of this red state, wasn’t always unabashed Noem’s country. In the 2018 primary, Noem blew past then-Attorney General Marty Jackley with a statewide 14 points victory, but Jackley, a Sturgis native, bested Noem in his home, Meade County.

Five months later, in the general election, Noem — who grew up on a crop-and-cattle farm in the far northeast corner of South Dakota, more Minnesota than Custer — squeaked by another West River politician, this one the former rodeo champion, Billie Sutton, a Democrat from Burke.

Even through the first half of her gubernatorial tenure, the former four-term congresswoman’s polling was low across the state. But that all changed during COVID-19.

“She’s normal South Dakota, and that’s what the rest of the world is missing,” said R. Victor Alexander, who runs the Three Forks C-store and campground outside Hill City, where a “Trump won” flag waves in the wind.

Alexander says he believes Noem’s opposition to mask mandates pressured the local school board to oppose mask requirements, as well, something he approves of. He also supports what he calls her “tourism policy” and “the fact that we did not necessarily shut down.”

“I’m supportive of what she’s done and what she will do,” he concluded. 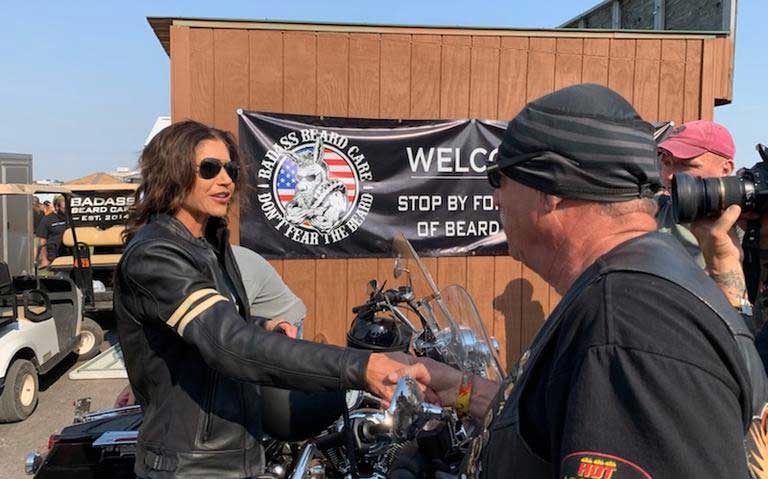 What’s next?
It’s the “will do” that is keeping people guessing. Noem has notched national TV spots, and traveled to fundraisers in Wyoming, Texas, and Florida. She’s given speeches in Iowa and Minnesota and campaigned last fall in New Hampshire.

These are the places one would go if they were running for president, not South Dakota governor. But, so far, Noem insists she has her eyes on a 2022 gubernatorial campaign, not the White House.

But if Noem does look to pivot toward a more Trumpian brand, she could do worse than take a trip down Vanocker Canyon or attend a charity auction in Deadwood, where Noem T-shirts now hang in stores.

A Noem staffer said this was Noem’s first time participating in the Rally, noting that the governor used to ride a motorcycle prior to starting her family (her three children are now grown), and recently picked up the motorcycle again.

And at least by mid-August, the ride is smooth for Noem. Pierre isn’t in session till next year. Democrats still lack a challenger. And the state just purchased the jet Noem requested and legislators approved.

Sure, there have been bumps.

Her Department of Education has come under fire for overriding teacher-drafted social studies standards, removing multiple references to Lakota and Dakota history and culture. A billboard went up in Rapid City sniping at her for opposing a voter-approved recreational marijuana amendment. And health experts anticipate a spike locally in the delta variant, which could draw further scrutiny of her hands-off approach to public health.

But appearing at a motorcycle rally, even one dominated by mostly older white people, where political incorrectness is as popular as riding without a helmet, could be a battleground state in her own backyard.

“It’s been a strong rally,” said City of Sturgis spokeswoman Christina Steele, though not as much as the 1 million attendees predicted by Woodruff. Still, along with RVs, Harleys, spending money, and maybe a virus, political disenfranchisement has also seeped into the rally’s mountain towns.

On Wednesday, Aug. 11, across from a billboard of the presidential wax museum featuring a smiling Joe Biden, Jay Perkins smoked a cigarette outside the store he runs. His T-shirt said, “We the People are pissed.”

Perkins said he “quit” news media after this election, and isn’t vaccinated, repeating skepticism about the safety of the vaccine. When two masked people walked into his store, he explained that some people who live outside South Dakota “believe all that stuff.”

Health officials are concerned this week the crowds — estimates of 750,000 — could send a spike in the delta variant around the region, with the state sitting just above 50% of its population totally vaccinated. But Perkins thinks the media focuses too much on the “drama.”

“What about all the charity events [during the Rally]?” he asks.

Artist David Uhl’s painting of Noem, for example, fetched $55,000 for a human trafficking non-\profit based in the Hills. Noem has even offered to fly down to Texas to install the painting in the winning Texas couple’s home (the couple did not respond to an interview request, though they told a local paper they “like” Noem).

On Wednesday, the crowds moved west across the Wyoming border into Hulett for a one-day rally.

Smoke moved in overnight from a wildfire in Montana, and news broke late in the day about a growing wildfire southwest of Sturgis, not far from the road Noem took days earlier.

But at the Gold Dust Casino in Deadwood, a man working painter Uhl’s booth — astride another painting of “True Grit,” plus a few more that resembled Noem — chatted about people “renting sight unseen” in the Black Hills.

Uhl’s usual stuff is biker propaganda. A longhaired rider cruising in front of Bear Butte. A gal bending near her motorcycle with a rattlesnake snarling at her while she points her pistol toward a distant cliff.

And now in the casino’s window, there’s an array of framed Noem paintings on display, capturing the photogenic governor — or a close look-alike — in heroic poses, buttoning an old-school leather helmet or riding her horse amongst the bison, as tourists from around the country walked past, snapping pictures.