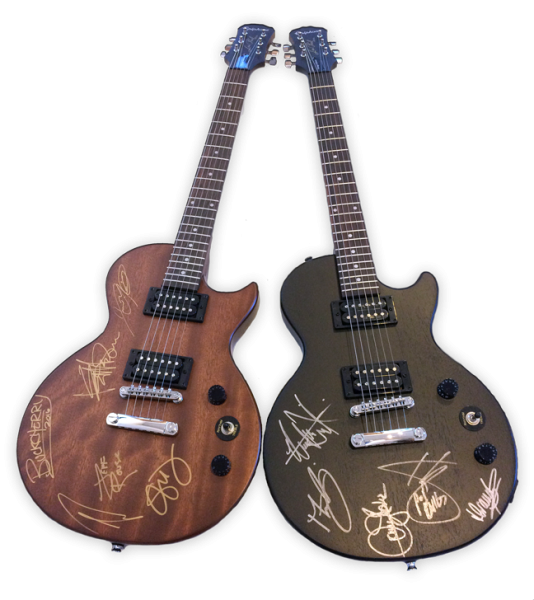 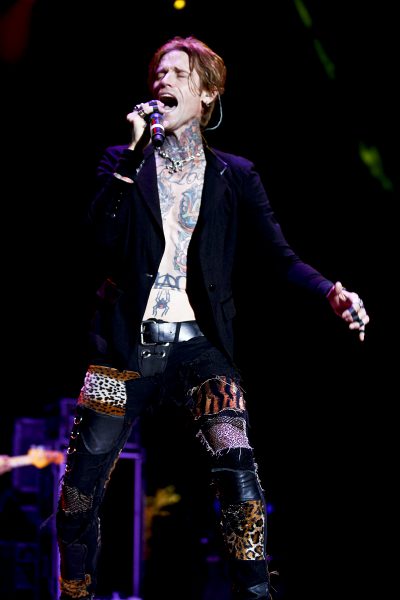 The Buffalo Chip is giving away two collector’s guitars and two hefty holiday shopping sprees. Members of rock bands Buckcherry and Pop Evil each added their signatures to an Epiphone Les Paul Special guitar while performing at the Sturgis Buffalo Chip in 2016. One incredibly lucky Chip fan will win the Buckcherry guitar, another will win the Pop Evil inscribed instrument and both will win a $125 Hot Leathers shopping spree.

How to Enter
Fans may enter the Rock the Holidays Sweepstakes at Buffalochip.com/RockTheHolidays for their chance to win one of these exclusive collectibles. Registration closes Friday, Dec. 9, 2016 at 5 p.m. MST. The winner will be announced Dec. 12.

It seems the AMD bike show is not being missed here in Sturgis at the Rally, with more bike shows being held than you can poke the proverbial stick at. Today’s efforts included the Road Iron/Eddie Trotta/Dirty Bird Concerts Bagger Show.Yep, baggers, baggers, baggers – where once the rally teemed with choppers, now it is Bagger City. The venerable Rat’s Hole show was held, the Hamsters Custom Bike Show Mayor’s choice Award, the Cycle Source Night time Chopper Show – the list goes on.

The big news, however, are the awesome new Indians which are generating huge interest.

All the signs are that the attendance this year is way up with many vendors reporting excellent sales. Bert Baker was smiling broadly, but then he almost always is, the boys at Performance Machine were putting in long hours fitting their superb wheel, the Kuryakyn display looked like an ant farm with customers jammed shoulder to shoulder shopping for all sorts of goodies and Mike Corbin was sitting back and purring like a Cheshire cat.

Thursday wrapped up for many rally patrons with a performance by Lynyrd Skynyrd.

Guests at the Sturgis Buffalo Chip® spent the day on the edge of their seats as the first ever Daredevil Wednesday packed in an insane schedule of fearless motorcycle stunts. The spectacle had the Buffalo Chip’s free access CrossRoads area swarming with Sturgis Rally-goers throughout the afternoon and into the evening.

Daredevil Wednesday included such stunts as Tim Dyson’s double backflip with a passenger, Juli Moody using her bare arms to hold together two drag racing motorcycles, Patch McGillicutty speed record on the Wall of Death and unimotorcycle drag racing. By far the most ambitious stunt of the day was Clint Ewing’s attempt to set the world record for the longest ride on a motorcycle through a tunnel of fire.

An expansive crowd, along with a team of paramedics and firemen, and the CMT film crew, all waited with bated breath as nearly 40 people lit the 230-foot tunnel with their torches. Within seconds, a roaring fire had engulfed the tunnel, filling the sky with an enormous cloud of black smoke. Without delay Clint Ewing fearlessly entered the 2900-degree tunnel, but within seconds both he and his bike emerged from the side engulfed in flames.  The emergency crew surrounded the brave stuntman, who immediately stood up to show he had survived the attempt. Even with third degree burns Ewing gave  a thumbs up as EMTs loaded him up and took him to a to a nearby hospital where he was later released.

The fiery performances continued into the night on the main stage, as Rob Zombie brought a multidimensional show complete with huge stage props and plenty of pyrotechnics. In a fitting end to Daredevil Wednesday, also included adrenaline-pumping performances by Mastodon and Machine Head.

The Sturgis campground continues its lineup up thrilling events on Thursday with its annual Freedom Celebration. In a day of events designed to honor our nation’s military men and women, guests are invited to walk the Buffalo Chip’s Field of Flags, visit the Veterans Memorial Wall and honor the lives of two Benghazi heroes during an undoubtedly emotional main stage presentation.

Patriotic rockers, Madison Rising, will kick off the evening of thrilling musical acts by performing their rock rendition of the Star Spangled Banner. Fellow patriots, Brantley Gilbert and Lynryd Skynryd, continue the American theme throughout the evening.

KORN in concert at the Broken Spoke Campground and Resort

What:    Concerts at the world famous Broken Spoke Campground and Resort, located at 13018 S. Dakota 79 in Sturgis, S.D., were very successful with all fans in attendance. Over the last several weeks motorcycle enthusiasts, music lovers and the curious have united at the Broken Spoke for its biggest year yet. With three days left to go of the rally you can be sure The Broken Spoke will continue to party to the very end!

The energy was electric and the lifelong memories were evident by all music fans that attended the 2013 national headliner concerts held at the Broken Spoke Campground & Resort.  The Broken Spoke opened its gates to some of the biggest names in the music business, hosting headliners including The Black Crowes, Queens of the Stone Age, Korn and Gary Allan.  The liveliness and excitement of the crowds lead to the success of the series.  Fans also enjoyed the many features of the campground, in addition to the live music.

[
Gary Allan performing at the Broken Spoke Campground and Resort

The Broken Spoke Campground offers 14 days of camping during the Sturgis rally in 600 beautiful acres with clean bathrooms, hot private showers and the 30,000 square foot ride-thru biker bar. Admission into the campground includes concert admission to headlining shows listed above as well as multiple motorcycle events and more. Camping reservations and concert tickets for the Broken Spoke Campground are available now.

When:   The Broken Spoke Campground and Resort is Open NOW

Where: Broken Spoke Campground and Resort

We took all three new Indian bikes today, but before we bring you a more in-depth evaluation, here's what an enthusiast had to say about his first ride on a 2014 Indian in Sturgis on Sunday.

Duane was the very first rider to throw a leg over a bike at the Indian Motorcycle demo this morning. We are honored by Duane's reaction and can't thank him enough for his long standing passion for Indian Motorcycle.

Last night, Bikernet (along the rest of the world) looked on as Indian Motorcycle ushered a new era in American motorcycle history in Downtown Sturgis, on the grounds of the Sturgis Motorcycle Museum & Hall Of Fame. The much-anticipated return of the Chief played out in front of a dense and enthusiastic crowd that had gathered for the momentous event. Entertainment was provided by a rock band, opening for of soulful rendition of the national anthem played by a talented trumpet player.

Atop the museum building, on each side of the facade, curtains opened on a pair of red Indian motorcycles that appeared out of a cloud of smoke and the crowd went wild as a group of riders, all tied one way of another to the Indian name and lore, rode in and parked a collection of 2014 Indian motorcycle for the world to finally admire.

You will find the Indian Motorcyce truck off the I-90 Exit at Lazelle; you can't miss it.

Indian To Reveal 2014 Chief In Sturgis

Indian announced full schedule of events and offers test rides too! Sign on to the Indian Motorcycle Facebook page for up-to-the minute information.

Legend Air Suspensions offers the smoothest ride possible with on the go adjustability at the touch of a button. Legend is also releasing it’s first of many new coil suspensions during the Sturgis Rally 2013. Stop by JP Cycle on Lazelle Street to see the new REVO coil suspensions!

Legend Suspensions will be set up at J&P Cycles: 1650 Lazelle Street, Sturgis, SD 57785. Here you can see the latest suspension systems installed on several display bikes.

The Legend Air Suspension manufacturing facility will be open to the public for product sales, service, and installations during the 2013 Sturgis Motorcycle Rally. Legend Air Suspension is located at 3461 Whitewood Service Road, Sturgis, SD 57785 and is open extended hours during Strugis.

For more information, to schedule an appointment, or for further details contact Legend Suspensions: 605-720-4202 info@legendsuspensions.com

The Sturgis Buffalo Chip’s annual celebration of music, motorcycles, freedom and camaraderie is slated for August 3-12 as the major destination for those attending the 2012 Sturgis Motorcycle Rally