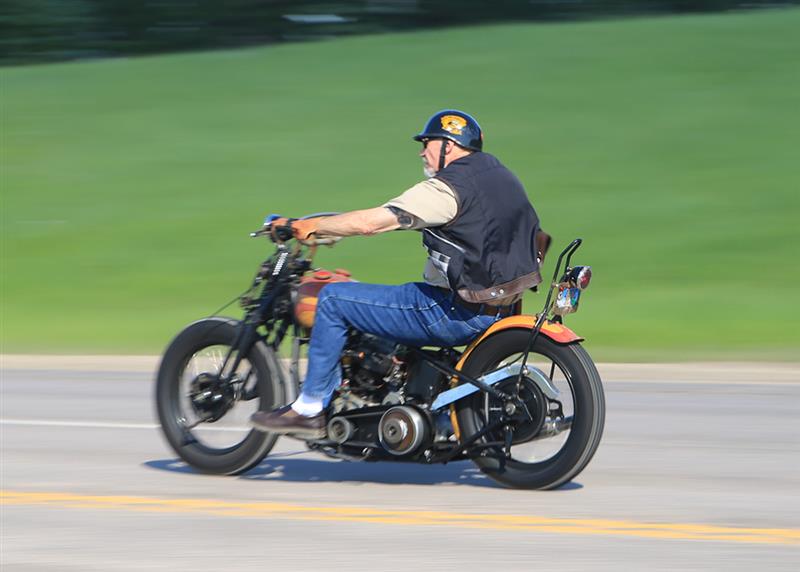 This could be a magnificent day in the hood, as you will see in the news.

I wrote a story for Micah’s feature in Choppers Magazine. Magazines are heating up again. My grandson, Frankie and the lovely Em set up the FiveBall booth at Born Free. The place was jammed and hot, but the 5-Ball banners flew high.

We will bring you the ultimate 4-speed trans clutch tech. It is working like a champ. Well, sorta. Then we bring you our first VL XA FL build tech with Irish Rich of Shamrocks Customs at the helm.

Have a terrific 4th, stay safe, don’t burn the house down. We will be riding free forever.

Click Here to Read all the great news this week. 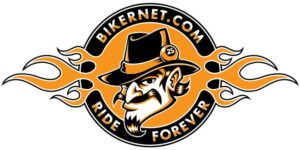 Have a look at all the cool features, reports & news from Bikernet.com online archive dating back to 1996. So much more for you to discover.

Cast Your Vote for the 2021 Biltwell People’s Champ 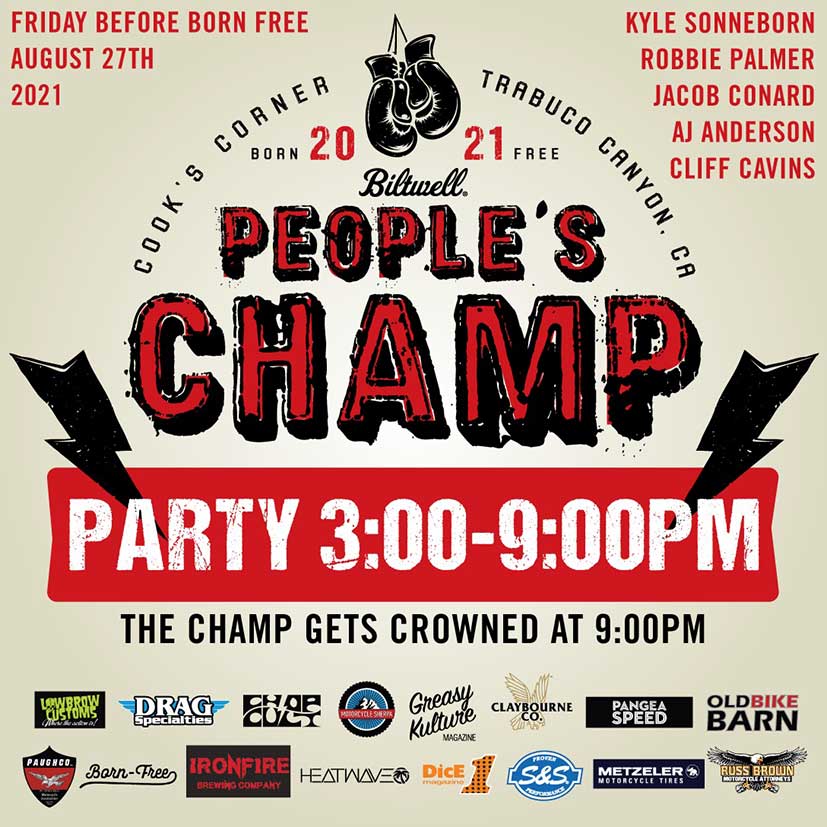 The final four Biltwell Peoples Champ builder videos and photos have been uploaded to the website and voting IS NOW LIVE until the morning of Aug 27. This year, the final voting is open to the internet and will not be done live at Cook’s. This helps the builders who aren’t local have a more level playing field. Remember, all builders still have to ride over Ortega HWY on their bikes and will be DQ’d if they don’t make it to the bar under their own power. These are Go Bikes that are as nicely crafted as any Show Bikes!

This year’s builders have met the deadlines and exceeded expectations.

Their videos and photo sets are all live on the www.peopleschamp.com website.

Now it’s up to you to pick the one who’s gonna win $10k and a spot on the grass with the Invited Builders at Born Free:

Come see the bikes and meet the builders the Friday night before Born Free at Cook’s Corner.

The CHAMP will get crowned around 9:00PM!

Weight saving. This was pretty much the idea behind the latest project coming from Suicide Machine Company (SMCO) and destined for the now canceled Born Free Motorcycle Show.

SMCO is a shop we’ve featured before. Led by two brothers, Shaun and Aaron Guardado, the garage was part of the bike maker’s The No Show online motorcycle event, held a few months back in support of all the builders that because of the health crisis were left without a venue to show their creations.

Back then, they presented a 2019 Road Glide Special modified to get a more aggressive riding position, one better suited for trips down highways. And now we’re getting a bike the shop describes as a “performance-driven and race-inspired” product.

What you’re looking at is a seriously lightened and undressed Harley-Davidson Softail Standard. It is the result of two months of work that saw a lot of the motorcycle’s hardware either being removed completely or replaced, all with the goal of making it lighter.

First, a lot of the original bodywork is gone. The fenders have been taken out, a new and full carbon fiber bodywork was placed on top of the frame. Not even the tank remains, having been replaced with a fuel cell hidden inside the new body.

Carbon fiber has been used extensively on this build, down to the tubes and the wheels that now weigh just a quarter of what the original ones weighed. Also, lighting and wiring have been kept to a minimum, and a titanium exhaust was added.

The bike continues to be powered by the stock 107 Milwaukee Eight engine, only it is no longer fuel-injected, but uses a 45mm Mikuni carburetor.

SMCO says the bike can be ridden as is, and you can see a bit of how that’s like by having a look at the video embedded below. 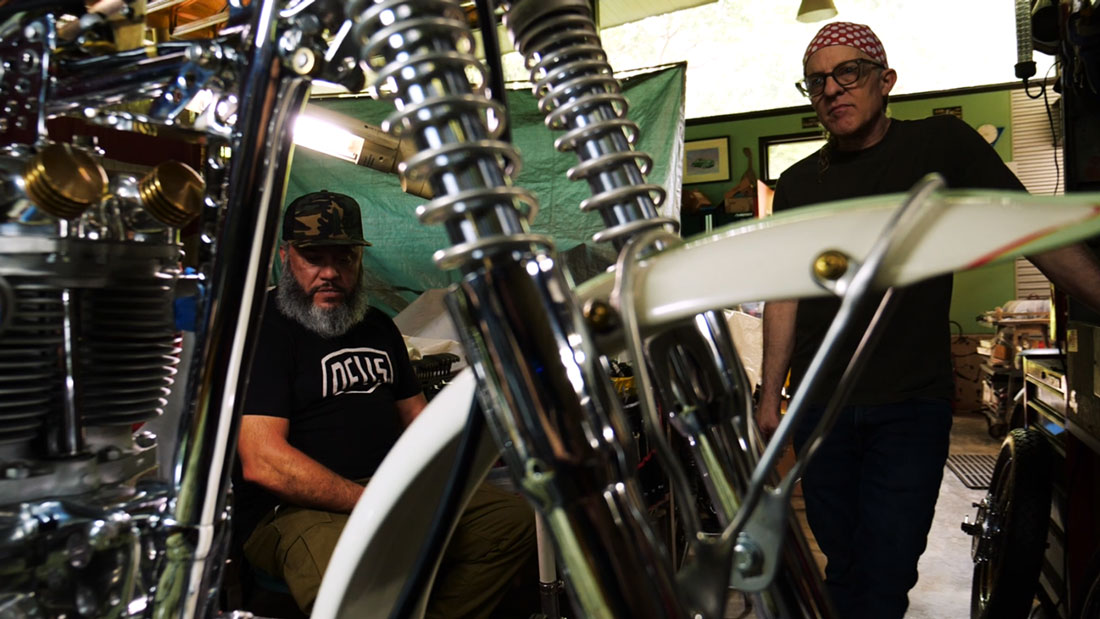 The Tucker Team once again heads west, this time in support our friend David Morales, co-founder of Denton Moto as he enters his 1957 Triumph “Freebird” in the Born Free 11 Invited Builders Show. See what David has to the say about his custom build.

We just added our full-length Born Free film to the Lowbrow YouTube channel so you can stream it for free.

Born Free is happening at the end of June in Orange County, California, as is the Biltwell People’s Champ. The People’s Champ is a build-off by a bunch of talented individuals, culminating in a vote for a winner at Cook’s Corner the night before Born Free. Check out the bikes and follow along on Instagram @biltwell_peoples_champ

Stay tuned to Lowbrow for coverage of the event!

The people below are using motorcycles in the proper fashion: excitement, adventure and passion. Get out of the house, out of your comfort zone, tag @lowbrowcustoms and hashtag #lowbrowcustoms, #lowbrowlife, #lowbroworder or #rideeverywhere for a chance to see your post highlighted here. 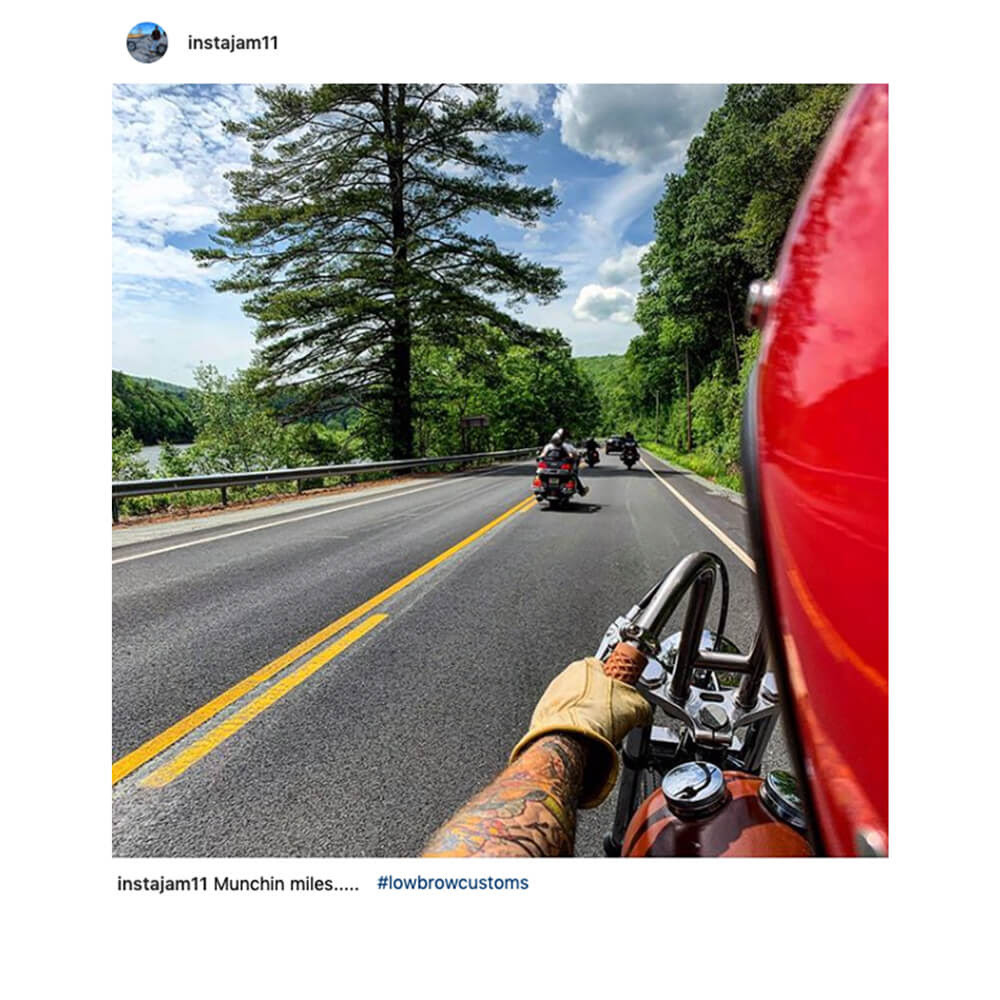 A Little Born Free Hype; Get Ready For The Action

Born Free 9 is almost here! J&P Cycles will be there this year with some great swag to give away. Here is a recap of Born Free 8 to get you in the mood for all the chopper and FXR shenanigans.