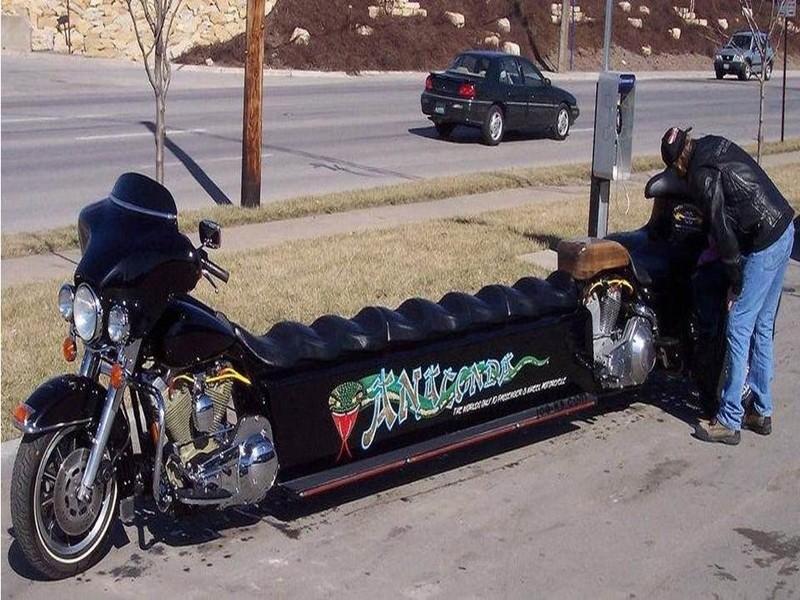 The Anaconda is named just that because it was – or aimed to be – the world’s longest motorcycle on the road. Unveiled on February 13, 2004 at the Annual CARQUEST Auto Parts World of Wheels, it is the brainchild of one Steve McGill from Kansas City. Smokey, as he likes to go by.

We’ve discussed in a previous story another strange, Harley-Davidson-based limousine hybrid, the LimoBike, which is part Harley, part limousine and a complete, steaming pile of “no.” The Anaconda is different, in that it resembles more a motorcycle and remains essentially a Harley, because it uses a Harley engine. It is still a trike, though, just to clear any possible confusion from the get-go.

In a 2005 Cycle Connections interview, McGill offered a surprisingly simple explanation for creating this monster of a bike. No, he didn’t do it because he wanted to become famous, though that would happen later. He did it because he’d realized no one else had made a Harley limo.

Whether that’s entirely accurate is debatable, but the bottom line is that he did it. After spotting a Harley Trike displayed at a local Wright Brothers Bikes store, he called to inquire about purchasing one. He started thinking that Harleys are the Cadillacs of the bike world, so it only made sense to turn one of them into a limousine.

Using one Harley and one DFT trike kit, he created the Anaconda, which gunned for the title of the world’s longest motorcycle on the road that same year it was unveiled. In a December 2004 interview retrieved by Cyle Connections, McGill claimed he had been in contact with the Guinness Book of World Records and had obtained confirmation that the Anaconda was a right fit for the record.

He also said he was yet to file all proper documentation, but strongly indicated that he would do so soon. It could very well be that he never did: there is no record of him ever holding a Guinness record. This leaves the Anaconda with the unofficial title of one of the longest bikes in the world.

Measuring 19 feet in length and weighing 1,420 pounds, the Anaconda can carry up to nine passengers, with the one in the back riding most comfortably. McGill needed 6 months and about 640 hours of work to put it together, and said that he was actually surprised how well the project came along.

“Some things went surprisingly well,” he said. “The shift rod is almost 12 feet long, and it had to have proper clearance as it routed through frame components and still align properly at both ends. With amazing luck, it lined up perfectly. I was lucky on a lot of stuff.”

The Anaconda looks like it’s powered by two engines, but the front one is a dummy. McGill says this was done on purpose, since he couldn’t even wrap his head around the idea of not having a motor under the tank. He would get a major rise out of people looking at the Anaconda and not figuring out how it worked.

“The back one is a stock Harley Evo motor and provides the power. The front one is a dummy, for looks only. I found out about a company in Leavenworth that produces over 300 different fiberglass engine replicas,” McGill explained.

“They’re normally used by custom builders to align motor mounts and such. Everything is in the right place, but it’s much lighter. I got a fiberglass Harley block from them and added real heads, primary cover, and other chrome stuff. It’s fun to watch people stare at that front engine and try to figure out how it works. It sometimes takes them a while to figure out that it doesn’t,” he added.

After the Anaconda was completed and made its grand debut, it continued traveling the country throughout 2004, attending various shows and winning countless awards. With an increase in the level of fame came another idea to McGill: that of using all this new-found popularity for a good cause.

It was never his plan to use the Anaconda for an actual limo service. So he started attending events to raise money and awareness for various causes, in between bike shows. And, of course, shooting cheesy videos with nine pink-clad ladies riding in the back to show it off.