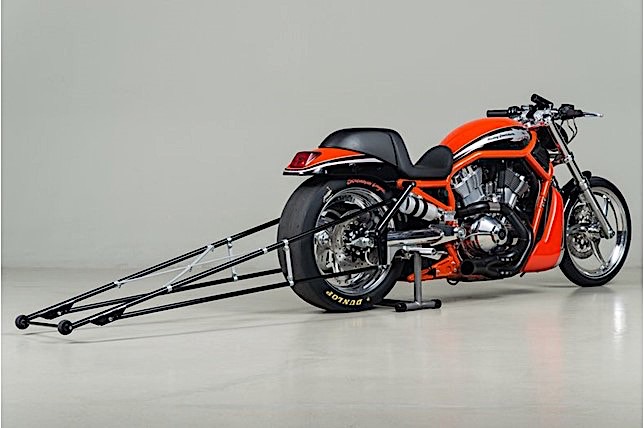 It’s known as the Screaming Eagle Destroyer. It’s a factory, non-stree-legal, purpose-built drag racing motorcycle capable of doing a quarter mile in under ten seconds as if it’s nothing. And it’s incredibly rare.

The motorcycle you see in the gallery above is the drag race-bred VRXSE Screaming Eagle Destroyer put together by Harley’s Custom Vehicle Operations (CVO) back in 2006. One that, unlike most others of its kind, has been kept locked up and never used on the strip.

In all its history, there were just a little over 600 units of the Destroyer ever built, and even that was a stretch given the fact Harley initially planned for a production run that was about half that size. So, yes, they are rare, and ones that have been kept as museum pieces can be considered non-existent. But thing is there is at least one such motorcycle in perfect condition, and it’s for sale, on the luxury-oriented DuPont Registry website.

Just like all others of its kind, this dragster motorcycle is powered by the same 79ci (1,300 cc) 165 hp V-twin engine, only it features a wide range of race equipment, including a long stroke flywheel, high compression forged pistons, a pneumatic shifter, and larger throttle bodies, among others.

The bike also comes with other extra features envisioned by CVO, including a stroker crankshaft, a racing transmission with a multi-stage lock up clutch, programmable shift light, and two-stage launch control.

Unlike all other bikes of its kind, it has been kept by its owner in a “museum-like” condition alongside other dragsters, meaning it’s dying to go out and have some fun on the tarmac.

The price for the bike is not listed on the said website, but given the fact one sold as new back in the day for a little over $30,000, don’t expect this one to be a lot cheaper.