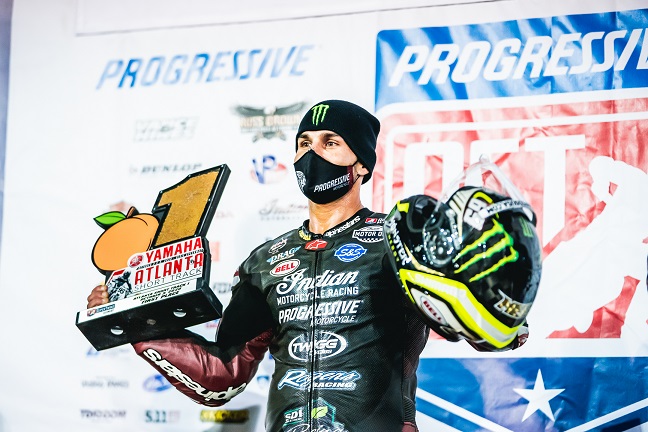 “It’s been incredible to see our team compete at a consistent level and again bring home the Manufacturer’s Championship for the fourth straight year,” said Gary Gray, Vice President – Racing, Technology and Service for Indian Motorcycle. “With four races remaining, we’re excited to see who can walk away with the No. 1 plate. Briar’s been hot and Mees hates to lose, so we should be in a dramatic and entertaining finish to the season.”

Atlanta Short Track II continued the dramatic, bar-to-bar racing from the night before, as Indian Motorcycle Privateer Brandon Price held Mees off as long as he could, coming up just short as Mees made his pass with only a few laps remaining. Price’s second-place finished earned him his first podium of the season, while Briar rounded out the all-FTR750 podium with a third-place finish.

With 244 points, Mees is firmly in second and now just 12 points back from Briar, who has 256 points on the year. With a pair of fourth-place finishes in Atlanta, Indian Motorcycle Privateer Sammy Halbert remains in third with 193 points, while Bronson Bauman and Price are fourth and fifth with 153 and 148 points, respectively.

The 2020 American Flat Track season will continue on October 9-10 at The Dirt Track at Charlotte Motor Speedway for the Progressive Charlotte Half-Mile I & II. For more information on Indian Motorcycle Racing, visit IndianMotorcycle.com and follow along on Facebook, Twitter and Instagram. 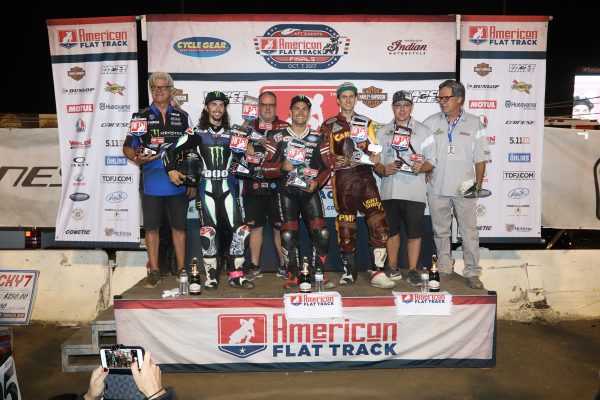 Mees, the 2017 Grand National Champion, finished the season just as he started in March at the Daytona TT – on the top of the podium. The win at the American Flat Track Finals in Perris, Calf. was Mees’ 10th of the season and set a new single-season record with 17 total podiums. Through 18 races aboard the Scout FTR750, Mees earned himself a career year and his fourth Grand National Championship.

“It’s been an unbelievable season with Indian Motorcycle. Since first testing the Scout FTR750 last year, I knew the bike was special and like nothing I’ve ever competed on,” said Mees. “I greatly appreciate all the love and support from my whole team, all the fans and of course my wife. It was a special season, and one I’ll look to top next year.”

“Countless hours from an incredible team went into building the premier Scout FTR750 race bike. And early testing showed we had something special,” said Gary Gray, Vice President – Product for Indian.  “Much of the credit goes to the Indian Motorcycle Wrecking  Crew of Jared, Bryan and Brad. We cannot praise these guys enough for all the work they put in during the season. It was a phenomenal year that vastly exceeded expectations, and we’re excited to carry this momentum to the 2018 season.”

Indian Motorcycle Racing and the Scout FTR750 remain undefeated through seven races. Jared Mees’ first place finish now ties him with fellow Indian rider Bryan Smith at the top of the points pole with 152 apiece, and continues Indian’s streak of securing at least two podium placements in each race this season.

The Scout FTR750 and Indian Wrecking Crew proved resilient during the first race in which Indian was nearly knocked off the top position. Mees employed the strategy of mile expert Smith by drafting from second position only to pull a last second outside pass on the final lap to inch out Sammy Halbert by 0.013 of a second for the checkered flag. Indian’s Brad Baker and Smith duked it out throughout the race to finish third and fourth respectively.

“It feels good to get back on the top of the podium,” said Mees. “This has been a season of firsts for me – I was the first to win on the Scout FTR750 at the season opener in Daytona, which was also my first time winning a TT and a season opener, so it’s only fitting I’m the first to win here at the inaugural Red Mile and be tied for first with Bryan.”

Mees is now the only rider in the series with a perfect podium record intact on the season. Although tied atop the points standings, Smith holds the tiebreaker with four wins to Mees’ three. Baker, who took third at Red Mile, sits in fourth with 92 points, 17 points off third place.

“This streak is a testament to the incredible capabilities of the purpose-build Scout FTR750 and the modern day ‘Wrecking Crew’ we’ve assembled,” said Gary Gray, Vice President – Product Development for Indian Motorcycle. “Jared and Bryan are fierce competitors, and once again their rivalry is taking center stage this season.”

Indian Motorcycle Racing, backed by Allstate Insurance, will look to continue its incredible run as American Flat Track heads to the OKC Mile in Oklahoma City, OK, on June 17.