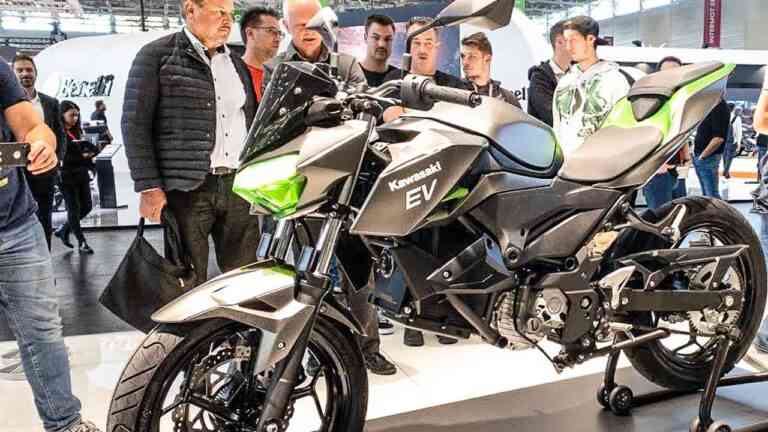 With its ICE-based motorcycles still going strong, Kawasaki has been rather slow in catching up with rivals in EV segment. The company has a long-term plan, wherein it aims to achieve a fully-electrified portfolio by 2035. It will include pure EVs as well as hybrid electric vehicles.

At INTERMOT 2022, Kawasaki has showcased a new EV prototype that appears to be of A1 specification (125 cc, 15 hp). It is the same model, as was showcased at Suzuka 8 Hours endurance racing event earlier this year in August. At the event, Kawasaki had also showcased a hybrid electric vehicle (HEV). Kawasaki electric two-wheelers could be launched in select markets such as US and Europe in 2023.

In terms of hardware, the EV prototype has standard telescopic forks at front and swingarm rear suspension. Alloy wheels have a trendy design and are shod with track-focused performance tyres. The bike has disc brakes at both ends. Sound note of this bike is close to the typical hum of an electric motor, as was revealed at Suzuka 8 Hours racing event.

While the EV prototype has a captivating profile, key details such as range, battery capacity, charging time, etc. are not available at this point of time. Kawasaki has done well to keep things tightly under wraps. Only the VIN information was revealed earlier, which showed that the prototype will generate 15 PS of max power. That should be good enough for some thrilling rides in an urban environment.

It is not certain if Kawasaki EV prototype will have a fixed or removable battery pack. The batteries are placed in the bike’s underbelly, encased by the frame from all sides. The battery pack should be accessible via the faux fuel tank lid.

Focus on ICE models
While it has started working on its electric and hybrid portfolio, Kawasaki has always maintained that its primary focus will be on ICE-based two-wheelers in the near future. That seems like a logical thing to do, as the company has global operations with a comprehensive range of ICE-based two-wheelers.

The capital investments involved, production platforms, human resource skilling, supply chain networks, etc. cannot be altered at short notice. Kawasaki’s 2035 target to achieve full electrification seems just right for enabling a smooth transition. The company has to ensure that its pure EVs and HEVs continue to offer the same level of performance and reliability, as associated with its current breed of ICE two-wheelers.