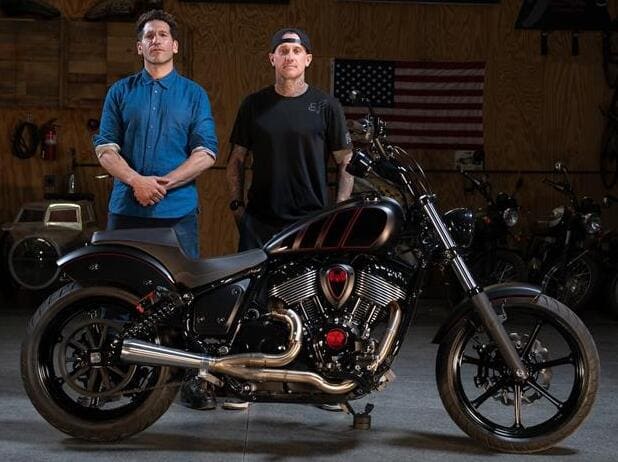 Hart channeled his high-performance, motocross background in the style and design of the bike, with classic, clean lines and sporty, performance features.

Hart is one of the most recognized names in all of freestyle Motocross. His father bought him his first motocross bike when he was only four years old in hopes of spending some quality time with his son.

However, what had originally started as a father and son pastime quickly turned into Carey’s passion. By the time he entered his first local race as an amateur, he was hooked and by high school graduation, he was a professional Motocross rider, racing AMA Supercross circuit.

Get the Free Weekly Newsletter by CLICKING HERE 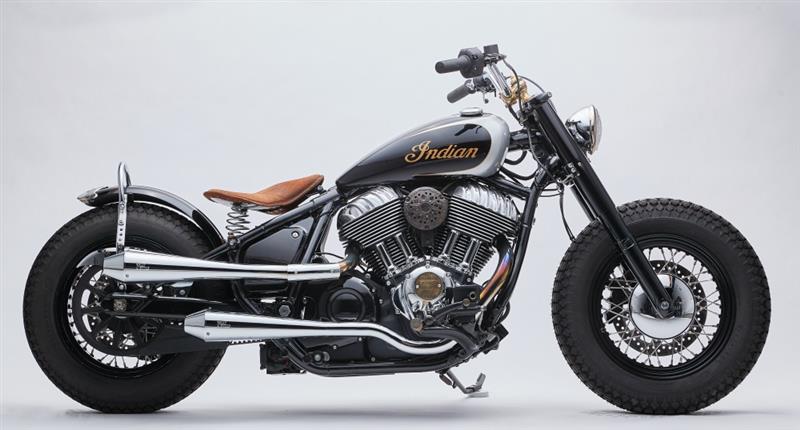 by Neil Storz with photos by Jeff Millard

In true Go style, he took a clean, minimalist approach to the build – adding vintage elements with the bike’s modern performance. 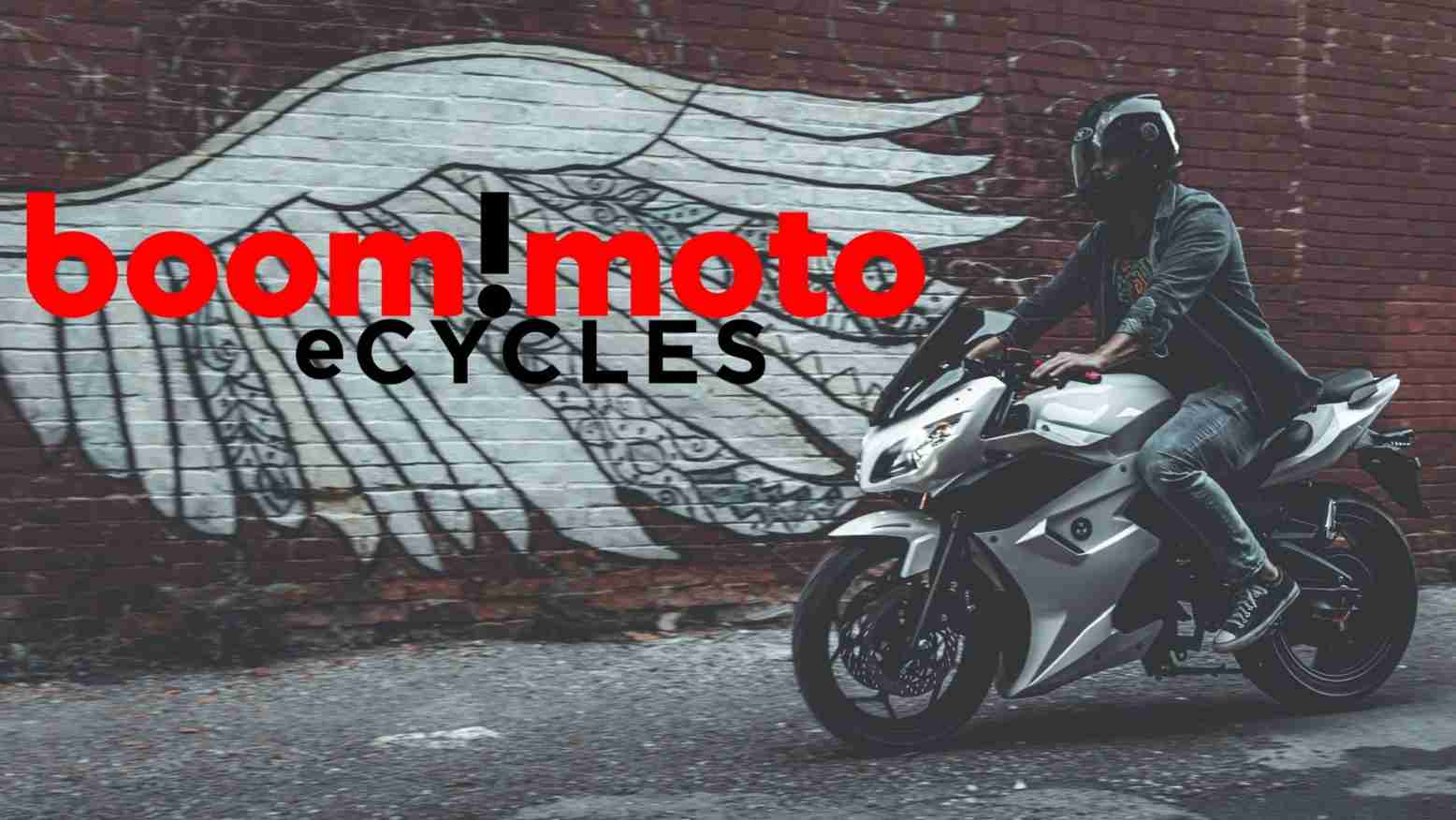 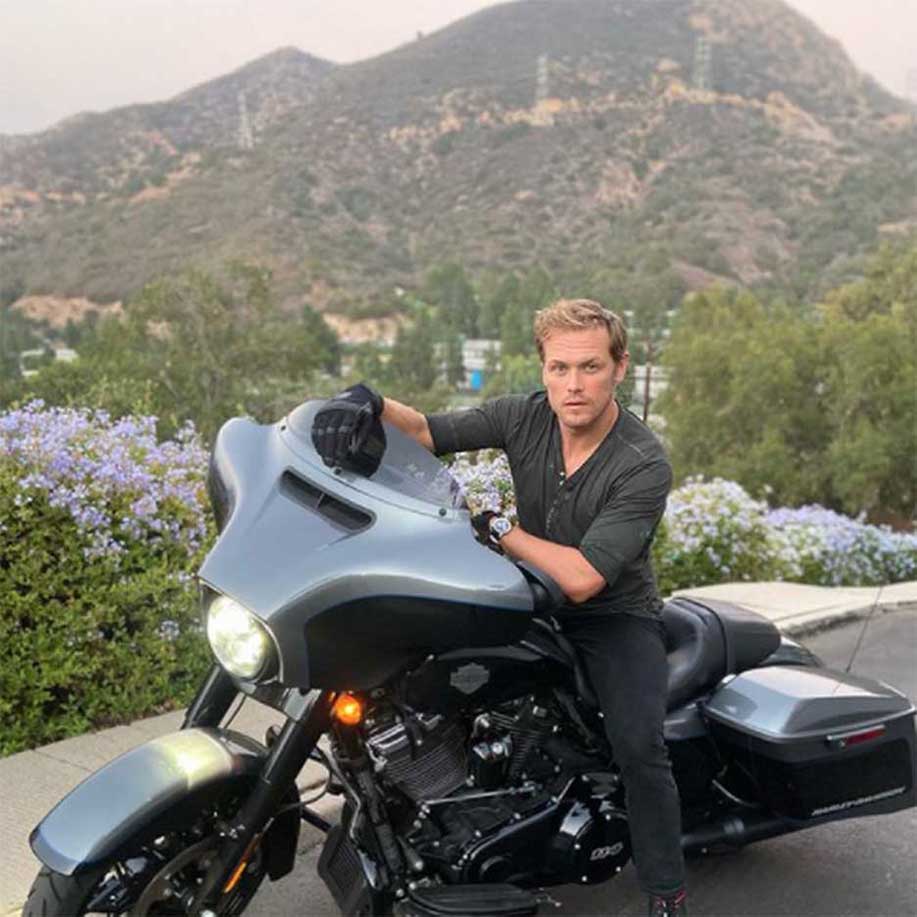 by Kirsten McStay from https://www.dailyrecord.co.uk

Outlander ‘s Sam Heughan posted a picture of himself posing on a Harley Davidson as he holidayed in LA.

The 41-year-old actor has been enjoying some down time since Outlander wrapped back in June.

He recently travelled to Mexico and before heading into the US where today he posted a picture of himself riding around LA on a plush Harley Davidson bike.

He wrote on Instagram: “Been cruising in the California sunshine! Thank you @harleydavidson for the loan of these sweet wheels. Nothing beats driving on these awesome bikes, to some good music and an epic landscape! @harleydavidson_uk @westcoastharley #harleydavidson #motorcycle #motorbike #ad.”

Back in July, Sam posted a similar Harley picture but instead of LA, with the stunning backdrop of the Scottish Highlands. 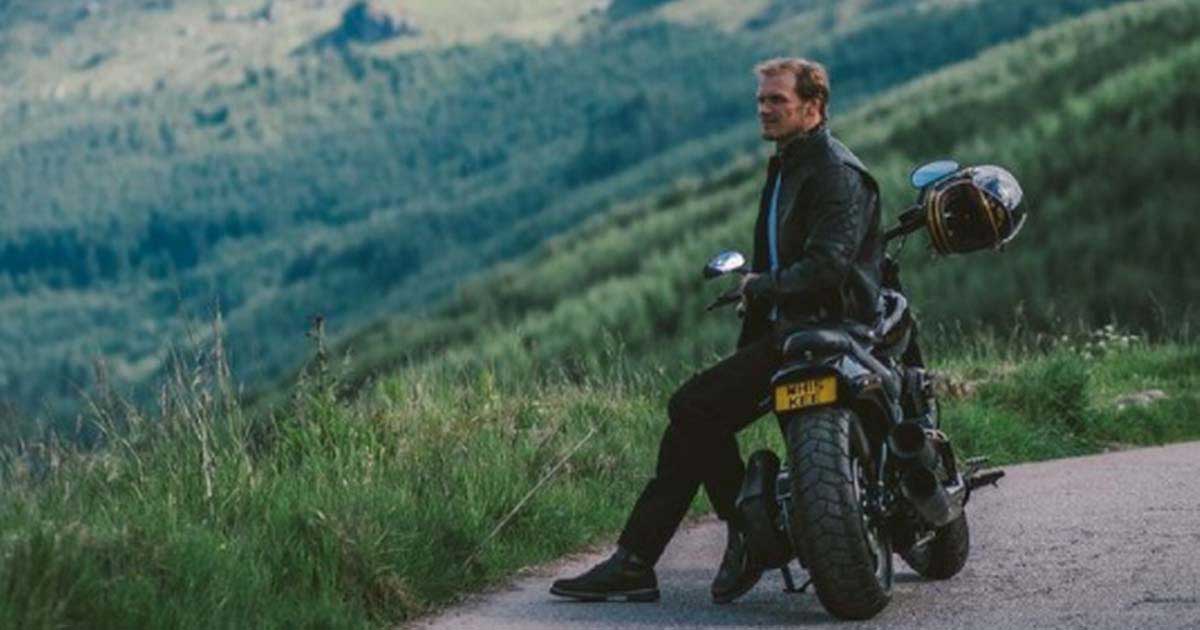 The picture was for a new campaign for his Sassenach whisky brand.

Sam donned a leather jacket as he perched on the Harley – with the number plate ‘WH15KEE’, and over looked a stunning view of hills.

In August last year, the actor passed his motorbike driving test in Rutherglen after taking a lessons for over a year.

He has since been out and about in Glasgow on his bike and now he posted the new snap in the Highlands while visiting for a work shoot.

Outlander is a historical drama television series based on the ongoing novel series of the same name by Diana Gabaldon. Developed by Ronald D. Moore (the Battlestar Galactica developer), the show premiered on August 9, 2014, on Starz. The series has been renewed for an 8-episode sixth season and a 16-episode seventh season.

Outlander series of historical fantasy novels is written by American author Diana Gabaldon. Gabaldon began the first volume of the series, Outlander, in the late 1980s, and it was published in 1991. She has published eight out of a planned ten volumes. 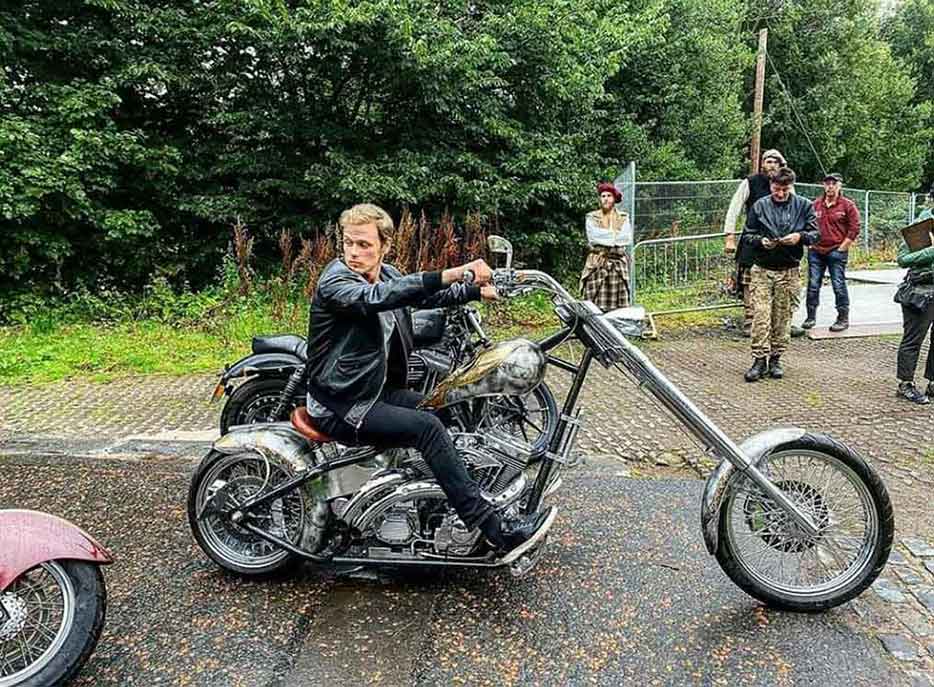 Tom Cruise rides a Motorcycle Off a Cliff for Mission: Impossible 7 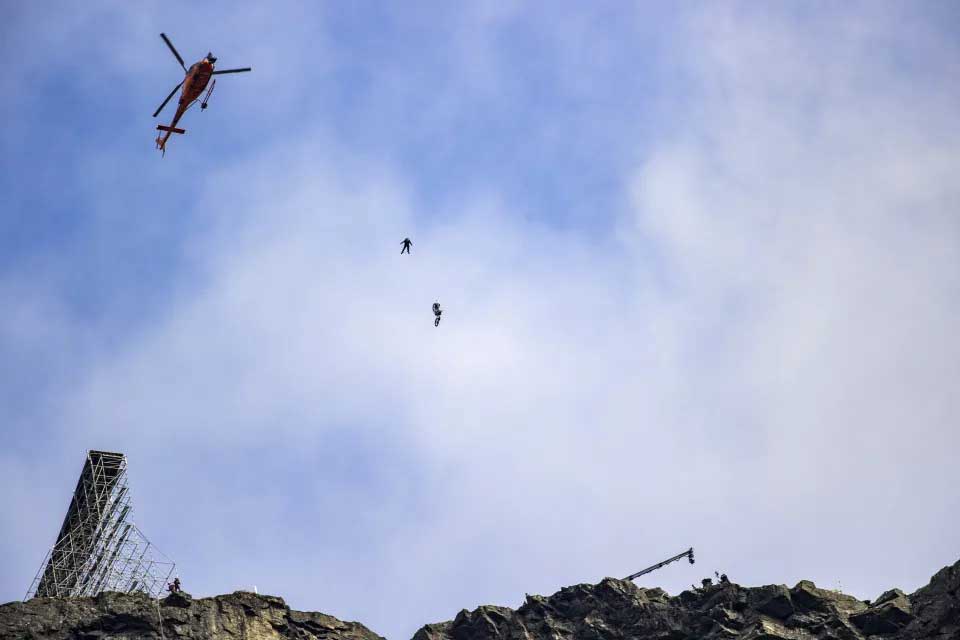 by Zack Sharf from https://www.indiewire.com

Tom Cruise Rode a Motorcycle Off a Cliff for ‘Mission: Impossible 7,’ His Most Dangerous Stunt Ever
A motorcycle. A cliff. A daredevil actor. What’s the worst that could happen?

Tom Cruise found himself jumping out of airplanes and hanging off the side of cliffs during the making of “Mission: Impossible — Fallout,” but apparently all of that is child’s play compared to what’s in store for “Mission: Impossible 7.” During an interview with Empire magazine, Cruise confirmed that one sequence in the next “M:I” installment features him riding a motorcycle off a cliff and is the most dangerous stunt of his career so far. 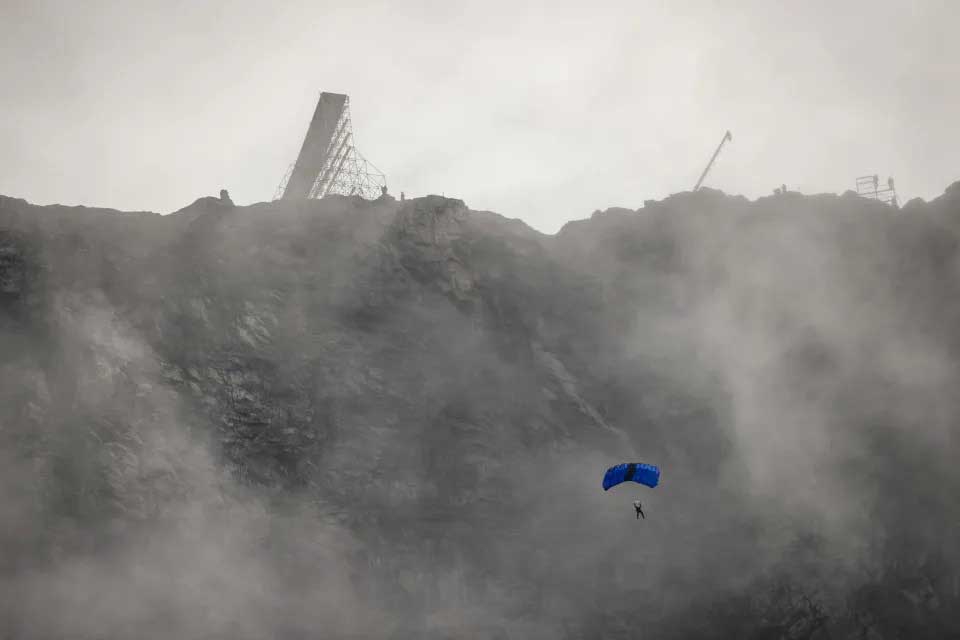 “If the wind was too strong, it would blow me off the ramp,” Cruise said about the stunt. “The helicopter [filming the stunt] was a problem, because I didn’t want to be hammering down that ramp at top speed and get hit by a stone. Or if I departed in a weird way, we didn’t know what was going to happen with the bike. I had about six seconds once I departed the ramp to pull the chute and I don’t want to get tangled in the bike. If I do, that’s not going to end well.”

While free-falling off a cliff on a motorcycle sounds insane, Cruise maintained that relief was one of the biggest sensations he was feeling during the stunt because there was a time during the pandemic where the production’s future was in question. “All those emotions were going through my mind,” the actor said. “I was thinking about the people I work with, and my industry. And for the whole crew to know that we’d started rolling on a movie was just a huge relief. It was very emotional, I gotta tell you.”

“Mission: Impossible 7” reunites Cruise with his “Rogue Nation” and “Fallout” director Christopher McQuarrie. Franchise veterans Ving Rhames, Simon Pegg, Rebecca Ferguson, and Vanessa Kirby are back for another go-around opposite Cruise, while new cast members include Hayley Atwell and Pom Klementieff. Cruise told Empire it became his mission last summer to get the “Mission: Impossible 7” production up and running in the safest way possible.

“Mission: Impossible 7” will open in theaters May 27, 2022 from Paramount Pictures. 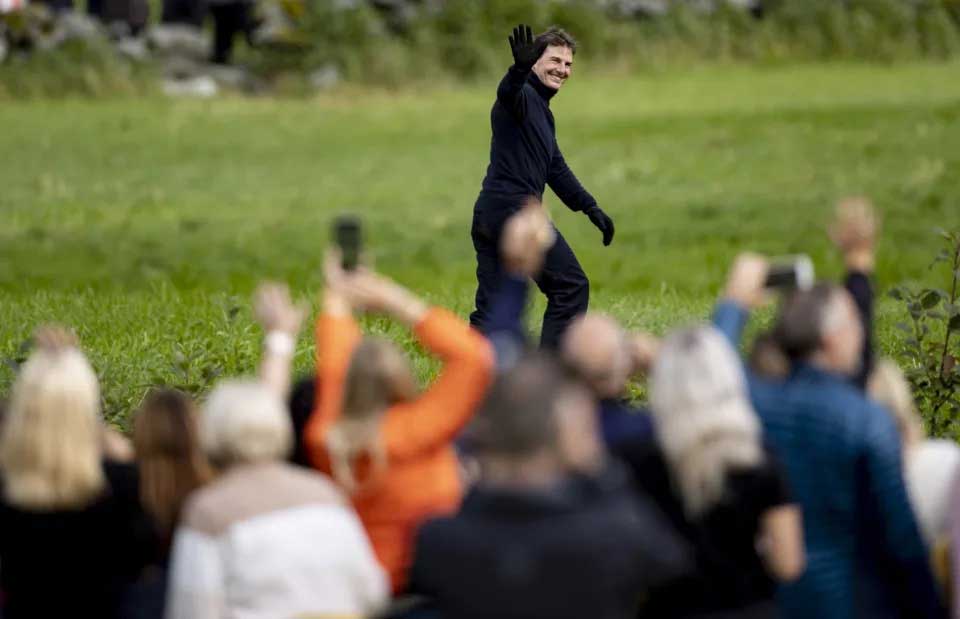 Cameras are now rolling again on Mission: Impossible 7, and to celebrate, Tom Cruise has driven a motorbike off the edge of a cliff.

We all recall Cruise hanging from a mountain by his fingernails and clinging on to the side of a plane in past movies.

Norwegian news site NRK has nabbed actual video footage of Cruise performing the stunt, speeding off the ramp, while a plane and helicopter fly overhead.

As the motorbike hurtles towards the ground, Cruise deploys a parachute to bring him safely to the ground.

Locals watched the stunt take place from the valley floor, with Cruise waving to the spectators as he landed safely.

According to reports, the production had to wait for several days for the weather conditions to be just right for the stunt.

Earlier this year, McQuarrie revealed that there are three ‘obscene’ stunts being planned for the movie, with this surely being one of them.

He told the Empire podcast: “We’ve figured out three obscene things that he’s doing that I’m terrified of, that make the (Mission: Impossible – Fallout) helicopter chase look like tinker toys.”

The movie had to close down production in Venice in late February, one of the first major movies to do so, following the outbreak of coronavirus.

The movie was slated for release on 19 November, 2021, having been shunted back from 23 July. Further delay is expected.