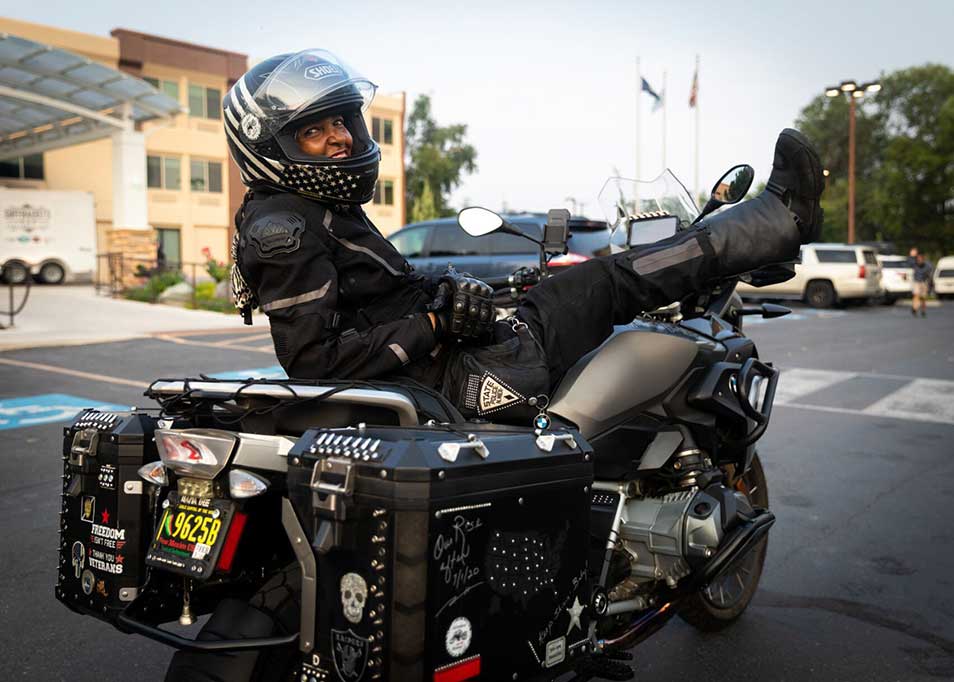 MISSOULA, Montana (Missoulian) — A group of 24 women packed their motorcycles, zipped up their jackets and revved their engines Wednesday before heading out on Day 5 of their three-week cross-country journey celebrating women’s right to vote.

The Suffragists Centennial Motorcycle Ride was originally scheduled for 2020 in honor of the centennial of the 19th Amendment, but it had to be postponed for a year due to the COVID-19 pandemic.

Clickenger began riding motorcycles nearly 25 years ago while in the midst of a divorce. She described herself as a shy housewife prior to finding her community through motorcycling, which ultimately changed her life.

“Motorcycling helped me grow into who I am,” Clickenger said. “I want to encourage other women to learn and grow and expand outside of their self-perceived limitations.”

She began planning the ride about three years ago to celebrate a century of the 19th Amendment, which granted white women the right to vote through the work of activists in the women’s suffrage movement between the late 19th and early 20th centuries. It took more than four decades for all women to achieve voting equality in the United States.

Montana ratified the amendment in August 1919, and was one of the earliest states to do so.

The ride began at the end of July in Portland, Oregon, and will snake its way across the country, stopping in places like Sturgis, South Dakota, and Knoxville, Tennessee, before ending in Arlington, Virginia, for the Women’s Motorcycle Festival and Conference.

Most of the women are retired, which Clickenger speculates is due to the long-term time commitment of the ride. But they range in experience, and for many this is their first cross-country trek.

A unique element to the group is the variety of bikes that the women are riding. They range from two- to three-wheelers, and makes and models from brands like Harley Davidson, Suzuki, Honda and Ducati.

“This is not about any one brand, any one style of bike, this is about women coming together to support each other and celebrate the women that have fought for our ability to be here,’” said Wendy Crockett, a ride leader for the group.

The opportunity to travel the country on a motorcycle with a group of women wasn’t one Crockett could pass up.

“In the course of my long-distance riding I’ve seen every amazing road this country has to offer,” Crockett said. “It’s very exciting to show it to a whole new group of ladies, but it’s also really exciting to help empower women to get out on the road and maybe step out of their comfort zone a little bit.”

Crockett is a certified motorcycle mechanic who lives in South Dakota. She was also the first woman ever to win the Iron Butt Rally, an 11-day, 11,000-mile endurance ride. Most recently, she’s completed the same rally by riding 13,600 miles in the same period of time.

As ride leader, Crockett ensures that her group makes it safely between stops and takes them to cool locations along the way.

“We cater each day to what they like so they have the vacation of a lifetime,” she said.

The ride is meaningful to Crockett, because it recognizes the people who she considers the “real trailblazers,” and ultimately made it possible for women like her to legally wear pants and ride motorcycles.

“We do some really cool, interesting, big things, but the strength of the women that fought for those levels of basic freedom is just really incredible,” Crockett said.

Crockett continues to break barriers for women who may not feel comfortable in the motorcycle community and hopes to provide more opportunities for her daughter as well.

“By the time she’s ready to ride on her own bike, hopefully it is nothing that even occurs to anybody that it is unique that a woman’s on a bike and she is just another rider,” Crockett said. “It’s perfectly normal for her to wear a princess dress and wrench on her own bike.”

Crockett’s daughter will join the group, riding in a sidecar, when they pass through Sturgis.

So far, the ride has been very hot but an overwhelming success, Crockett and Clickenger said. They climbed Lolo Pass before arriving in Missoula to rest on Tuesday evening after nearly 200 miles in the saddle.

They also ventured over to the Jeannette Rankin Peace Center for an event that same evening.

“We were really looking forward to the visit at the Rankin Center because she was one of the early suffragists,” Clickenger said.

Betsy Mulligan-Dague, the former executive director of the Jeannette Rankin Peace Center, joined the group on Wednesday to ride across the country.

On Wednesday, the group took off early in the morning to beat the heat and headed for Butte.

Above all else, Clickenger hopes that the event will empower more women to ride motorcycles and find their own personal freedom.

“There is so much more beyond what society tells us we should, or can, be,” Clickenger said.