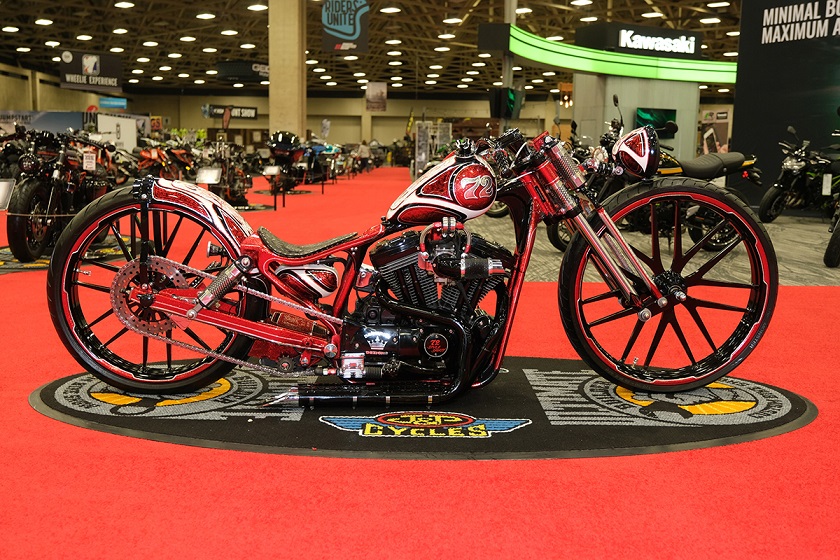 by Marcella Raymond from http://wgntv.com

One of the most powerful doesn’t use gasoline, it uses electricity. The first electric Harley Davidson can go from zero to 60 mph in three seconds.

“You can charge it overnight using a 110 outlet or DC level fast charger,” Jocelyn with Harley Davidson said. “Zero to 80% charged in about 45 minutes.”

The motorcycle show is all about a smooth ride and speed.

“Drive the ride” was showing beginners how to ride.

It’s an electric-powered assisted bike ride that lets first-time riders get the feel for a motorcycle.

The Progressive® International Motorcycle Shows® (IMS), an industry leader on connecting powersports brands with highly qualified enthusiasts and buyers, today announced the winners of the 2019/2020 J&P Cycles Ultimate Builder Custom Bike Show (UBCBS) Championship, with Jordan Dickinson of Union Speed and Style taking home the U.S. Champion title for his 1947 Harley-Davidson Knucklehead. Hundreds of custom builders competed across this year’s tour for the chance to compete in the championship round that took place at IMS Chicago on Sunday, February 9.

The winners across each category from all eight cities along the 2019/2020 tour — Long Beach, New York, Dallas, Washington D.C., Denver, Cleveland, Minneapolis, and Chicago — were entered into the Championship round where winners were then selected by a panel of industry experts and awarded tens of thousands of dollars in cash and merchandise. Evan Favaro of Speakeasy Motors won the Custom Classic category, Chuck Conrick of DA Performance won best for Custom Street, and Jordan Dickinson won for Freestyle.

Celebrating its tenth consecutive year shining a spotlight on the most beautiful, one-of-a-kind custom motorcycles across the nation, UBCBS is the largest and one of the most sought-after touring custom bike competitions in the nation. The elite-level custom motorcycle builder competition features hundreds of intricately built custom motorcycles across the eight-city IMS tour. The UBCBS is sponsored by J&P Cycles, the world’s largest aftermarket motorcycle parts and accessories store. The competition has supported IMS’ commitment to fostering garage builders while continuing to entertain, educate, and thrill all two-wheel enthusiasts since 2012.

“I am honored to be named the U.S. Champion by the builder community,” said Jordan Dickinson, U.S. Champion of the 2019/2020 UBCBS. “I hope to inspire others to get out there and start building themselves.”

Builders that competed in the 2019/2020 UBCBS came from diverse backgrounds and skill levels. Over the last nine years, the UBCBS has showcased over 3,000 custom builds from an array of up-and-coming and seasoned veteran builders. Builders have been a part of a team of friends, family, or have built custom bikes by themselves.

“The sheer talent displayed throughout the entire competition has been extremely impressive. From the creative and eye-catching builds to the most ingenious uses of unconventional parts, this year’s 2019/2020 competition builders should be proud of their work,” said Bob Kay, director of UBCBS. “I am proud to recognize Jordan Dickinson as this year’s U.S. Champion for his 1947 Harley-Davidson Knucklehead that clearly demonstrates the combined technical and aesthetic craftsmanship of custom building that excited and inspired the judges.”

The winners of the championship round of the 2019/2020 UBCBS are as follows:

The UBCBS competition is open to all levels of builders and fabricators. Those interested in competing in next year’s 2020/2021 UBCBS competition can register online at motorcycleshows.com/ubcbs or on-site for one or all eight shows for the upcoming season.