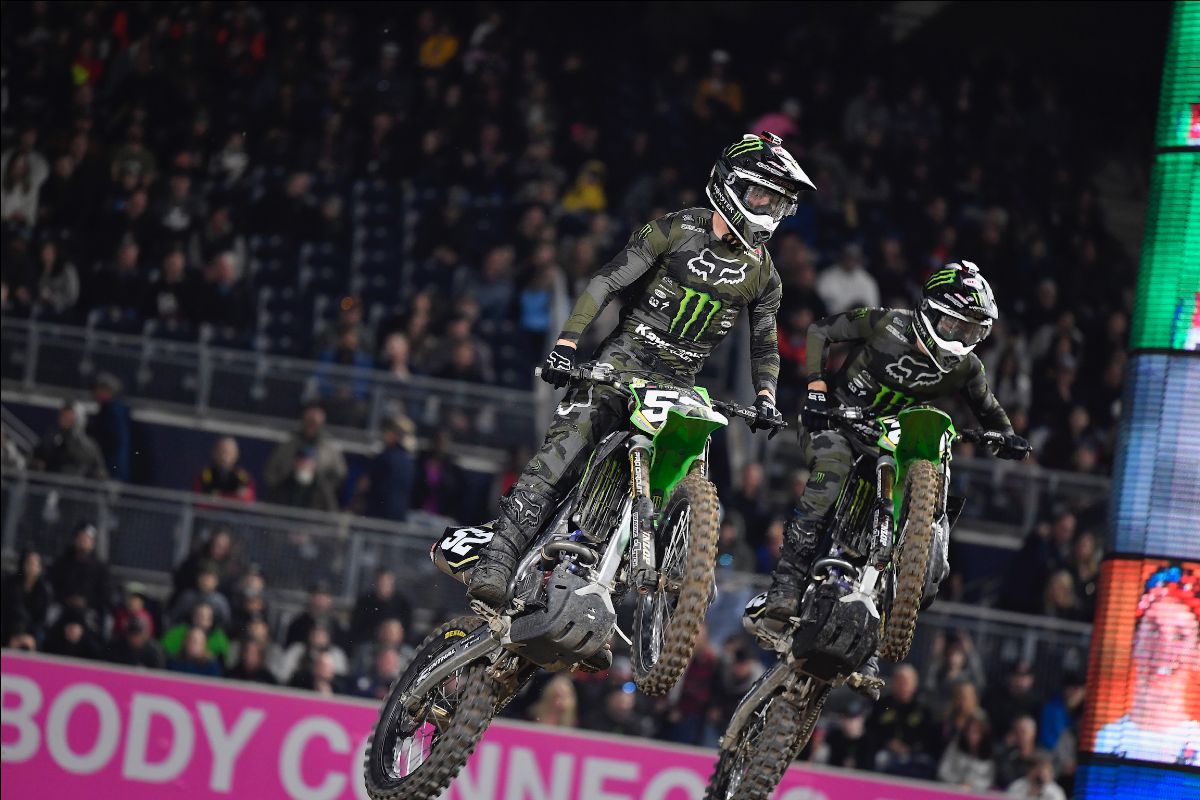 Cianciarulo kicked the day off by qualifying with the fastest lap time (49.024) for the sixth week in a row with his teammate Eli Tomac once more following closely in second.

As the gate dropped on 450SX Heat 1, Tomac was banging bars at the start which would leave him buried in the pack. Making quick work in the short race, Tomac was able to pass six other contenders in the nine-lap race before crossing the finish line in third.

450SX Heat 2 saw the No. 9 of Cianciarulo grab the holeshot aboard his KX™450 and lead every lap to take the checkered flag. His second heat race of the season.

Similarly to the heat race, Cianciarulo shot out front in the 450SX Main Event leading the 22-rider field. Cianciarulo led 20 of the 25 laps before getting passed, crossing the finish line in second. The runner-up result is the rookie’s second runner-up finish of the season and jumped him up to fifth in the 450SX Point Standings.

On the other hand, Tomac found himself buried mid-pack in the main creating a daunting task on the tight track, where it was difficult to make a pass. Tomac went straight to work and began maneuvering his way around competitors one-by-one, but not without a few wild battles along the way. Before the end of the 20-minute main event, Tomac was able to push forward and cross the finish line in fourth, now sitting just one point behind the series’ points leader.

Traditionally, the San Diego round is designated Military Appreciation Night to honor our servicemen and women, which provided the opportunity for the Kawasaki teams to rock unique camouflage gear and graphics on their KX™ machines.

“Well, I was challenged tonight after having to fight my way towards the front in the main. I didn’t have the best start, but we’ll get back to work with the Monster Energy Kawasaki team this week and hope to improve for Tampa next weekend. I do feel I rode well tonight and I’m proud we were able to make up quite a few positions to finish fourth on the night.” – Eli Tomac

“I’ve been waiting and working for this my entire career, to ride in the premier class and get on the big stage. I’m still learning, still improving every day, and I feel like I rode really well tonight. I led nearly every lap of the race but unfortunately got passed at the end so I’m a little disappointed I couldn’t hold Cooper [Webb] off just a little longer. Honestly, I’m just excited to be up front with such a talented group of guys and prove I can compete.”– Adam Cianciarulo

The Monster Energy/Pro Circuit/Kawasaki teammates kicked off the night show lining up for 250SX Heat 1 and putting on quite the show as they launched out front aboard their KX™250 machines. The duo began their battle as Forkner grabbed the holeshot but was quickly passed by McAdoo for the lead. McAdoo led the first two laps before Forkner raced around him, eventually pulling away to take the heat win and finishing 1-2.

Once again, Forkner grabbed the holeshot as the gate dropped on the 250SX Main Event but fell back into second in the first lap, while McAdoo started in sixth position. Forkner waited patiently before making his move and by Lap 5, the lead would be his. Forkner led the majority of the race before getting passed late to take second, earning his fourth podium of the season. Despite making his way into the top-5 and riding well all night, McAdoo was forced to retire early from the race due to a mechanical issue, placing him 22nd on the night.

Although misfortune struck on the track, McAdoo was surrounded by good company this weekend as his older sister Petty Officer First Class Mackenzie Poskevich, who serves in the U.S. Navy was able to attend and be by his side for the special military appreciation weekend.

Forkner and McAdoo will now take a six-week break from the races as the series heads East next weekend in Tampa, Florida. The duo will tag in their Monster Energy/Pro Circuit/Kawasaki East coast teammates, Garrett Marchbanks and Jordon Smith to continue the team’s winning ways.

“I had a pretty good day. I rode well starting from qualifying, won the heat race, led most of the main and grabbed another second. It’s not exactly where we want to be, but I’ll take another podium.  We’ve got a six-week break, so we’ll go back, get to work and come back swinging.”– Austin Forkner

“Things like tonight just happen sometimes in racing; it’s out of anyone’s control and you just have to roll with the punches. That said we had a solid heat race and it was cool to represent the U.S. Navy on the track with my sister in the stands. We’ll continue to work during the break, will be excited to get back to racing in a few weeks.”– Cameron McAdoo