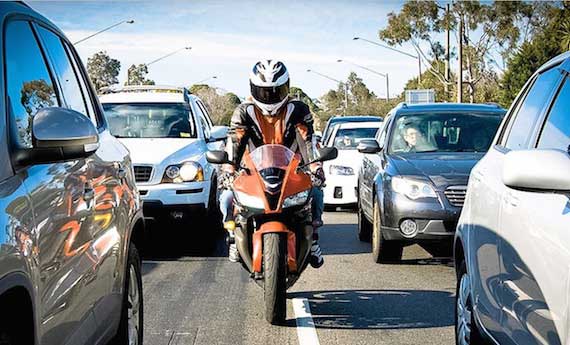 by Chris McGinness from https://www.ktvb.com

When you’re driving on a crowded freeway how would you feel about sharing the road with motorcycles moving from lane to lane? Sound scary and dangerous? Riders say it could actually be safer than what’s allowed now.

“Lane filtering,” as proposed in Oregon Senate Bill 574 (summary here), would allow motorcyclists to move back and forth between very slow moving traffic on multi-lane Oregon highways. Similar legislation has been discussed since 2015. This time around, there are clearer definitions for when the practice would be legal.

Still, the perception many drivers have about lane filtering is of the occasional reckless rider zipping though traffic. We asked a few motorists about it as they gassed up at Radio Cab in Northwest Portland.

“It scares me a little bit,” a man named Ravi said. “If there’s’ something in the road and I have to get out the way really quickly, I would hate to accidentally have to merge into his driving lane.”

“Well, I think that’s an incredibly bad idea but if you want to take that risk,” said a woman named Kate.

The lane filtering proposed in Oregon takes many of the concerns into consideration.

Advocates, of which there are many of both sides of the political spectrum, point to three benefits to permitting lane filtering: reduced congestion, reduced emissions and enhanced rider safety.

This last point seems counterintuitive unless you’ve ever ridden a motorcycle in stop-and-go freeway traffic.

“A motorcyclist in stop-and-go traffic is basically a sitting duck there,” said Leyshock. “You’re exposed to the elements, exposed to the traffic around you. This bill would allow you to actually position yourself in a safer place, namely between cars. And again, we’re talking essentially parking lot speeds here.”

“California has unequivocally shown that in the event of an accident, riders who are lane sharing are less likely to be killed or injured,” Leyshock said, referring to a 2015 UC-Berkeley Study.

California, Utah and Montana have legalized some form of lane filtering. With new clarification of the guidelines, the governor’s motorcycle advisory committee removed opposition to the bill.