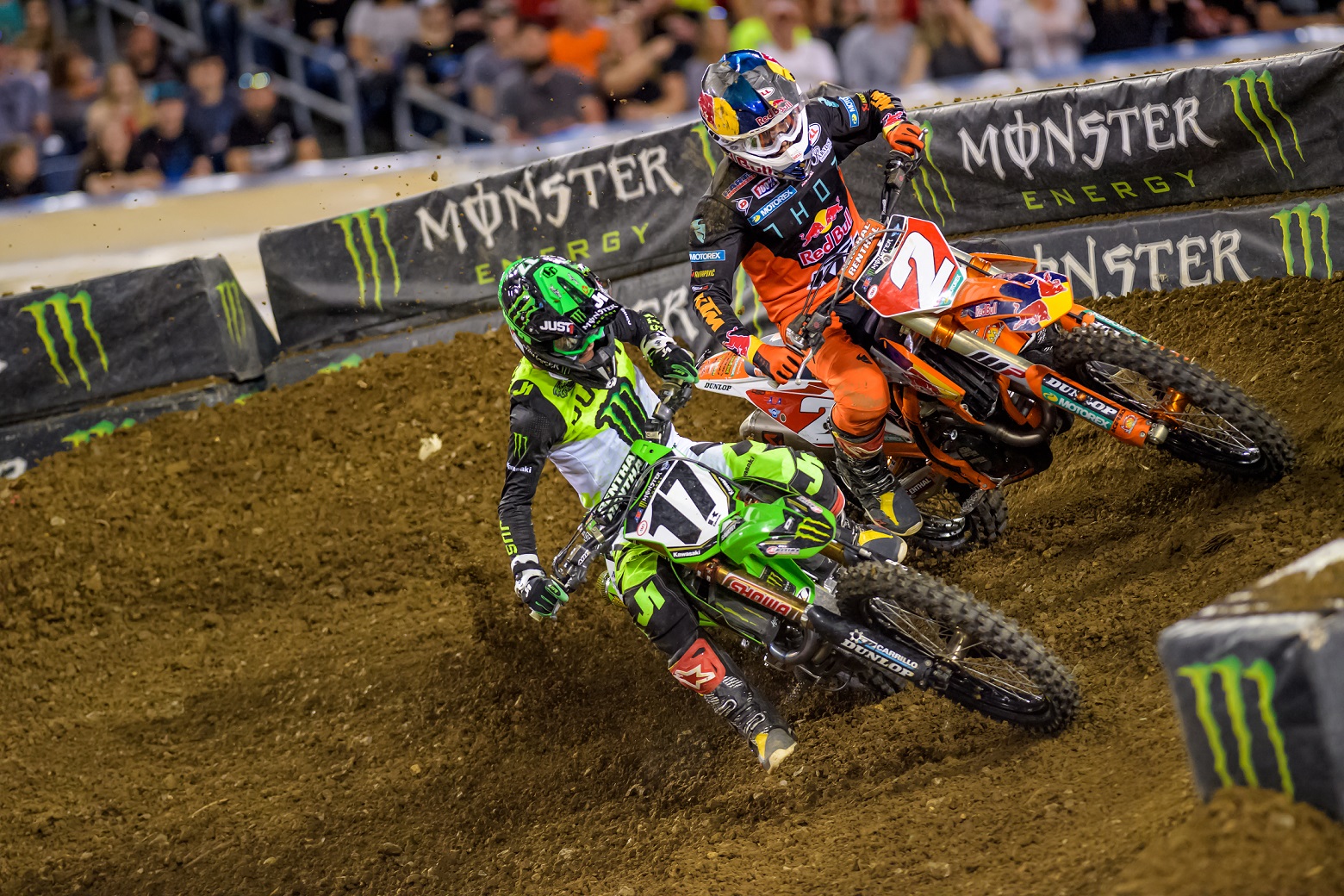 It was a roller coaster day for the No. 3 machine of Tomac aboard his KX™450 as he pulled off his own version of the “Music City Miracle” in Nashville. Tomac started out the day struggling to find his rhythm during practice and would qualify in sixth position heading into the night program. In the first 450SX heat race, Tomac quickly passed into the lead in the opening laps and began to check out, however due to unfortunate circumstances Tomac was unable to finish the race, sending him to the Last Chance Qualifier (LCQ). Being put into unfamiliar territory by racing in the 450SX LCQ was not going to stop Tomac as he made quick work of the competition and won the LCQ. Regardless of a poor gate position as the result of qualifying through the LCQ, Tomac put himself in a strong position off the start of the Main Event. He quickly began to capitalize on his competitors’ mistakes and worked his way into the lead with 12 minutes to go. From there he rode a consistent race, building more than 11-second lead to cross the checkered flag as the first-ever 450SX Main Event winner in Nashville, Tennessee.

Joey Savatgy began the day qualifying in fourth position. In the 450SX Heat Race 1, Savatgy found himself near the front and he was able to make a clean pass for the lead and go on to win his second career 450 class heat race. In the 450SX Main Event, Savatgy found himself in similar territory, sitting in second place looking to make another move into first, but he landed off a triple right into a slick spot where he tucked the front in and augured into the ground and ending his night.

The King of Supercross, Jeremy McGrath made a special guest appearance at the inaugural race in Nashville, Tennessee where he joined fellow Kawasaki riders Tomac and Savatgy for opening ceremonies. McGrath even put on a show for the crowd by throwing a signature Nac-Nac during the opening ceremonies parade lap aboard his KX450.

In the 250SX class, it was Monster Energy/Pro Circuit/Kawasaki rider, Davalos who found some magic in the music city as he won his first 250SX heat race and first 250SX main event of the 2019 season. This win marked Davalos’ fifth 250SX career win as he became the first ever 250SX winner in Nashville and extends Kawasaki’s win streak in the 250 SX East Region.

Davalos started the day out strong with a second place in qualifying, placing him in the first race of the night in the 250SX Heat Race 1. Davalos nabbed the holeshot and never looked back as he went on to win the race. In the 250SX Main Event, Davalos once again was off to a strong start in third place and by the end of Lap 1, he would capitalize on a mistake from the two competitors in front of him, where he would take the lead never looking back and ride a clean and consistent race, to the finish.

It was a tough day for the current 250SX Eastern Region points leader, Austin Forkner, as he suffered an injury from a crash in practice that ultimately sidelined him for the night program. Forkner and the team elected to sit out for the night so that he could be fully prepared for the final two rounds of the championship hunt. Forkner retains the points lead and the red plate going into New Jersey.