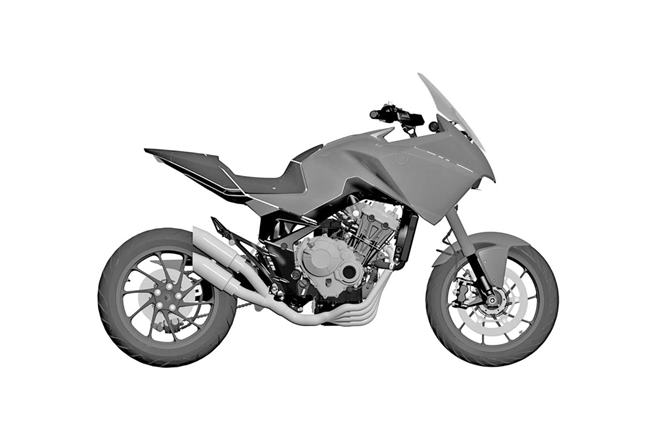 Looks like Honda’s Multistrada V4 challenger will come with a breathtaking design! Find all details here.

Honda is currently working on a full-fledged ADV and very recently, the patent for the same has been filed with the European Intellectual Property Office. While on one hand, Honda’s Africa Twin CRF1100L aims at serious off-roading, on the other, the said ADV model will have a focus on the roads and will compete against the likes of the upcoming Ducati Multistrada V4, BMW S 1000 XR and the Kawasaki Versys 1000 in the segment. One of the important highlights of the upcoming Honda ADV will be that it will feature an inline four-cylinder engine. The ADV will get 17-inch alloy wheels at both ends. As one can see in the patent images, courtesy RideApart, the bike will get a semi-fairing and should get a full-LED lighting system.

Moreover, in terms of features, the ADV is expected to get a fully coloured TFT instrument cluster and the unit should support Bluetooth connectivity as well. The bike is also expected to get an adjustable windscreen. Also, as one can see in the patent images, the bike will get inverted forks upfront along with a rear monoshock. Moreover, the bike will come with dual disc brakes upfront along with a single disc at the rear and a dual-channel ABS (Anti-Lock Braking System) will be a part of the package as well. The bike will get a single-sided swingarm too.

Coming to the powertrain, there aren’t much details available yet. However, we believe that being a full-fledged, full-size ADV, the bike will draw power from a litre-class engine that should have a power output of well over 100hp. We can expect to see this bike sometime next year with a public debut likely at the 2021 EICMA motorcycle show.