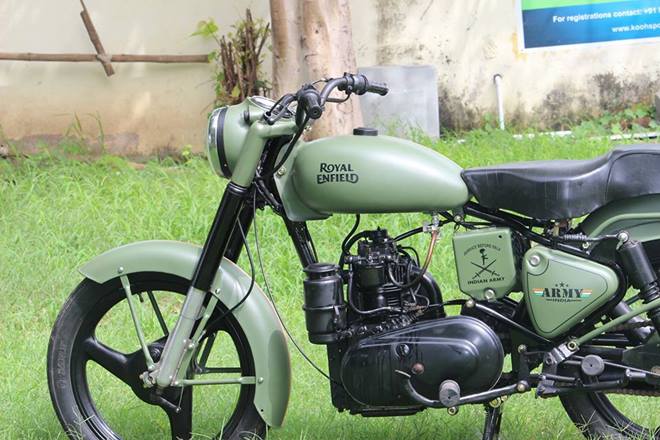 by Abhilasha Singh from https://www.financialexpress.com/

How many of us remember Royal Enfield Taurus? Popular in the 1980s and 90s, the Taurus or Royal Enfield Bullet Diesel is the only Diesel-powered motorcycle that has ever been mass-produced in India.

The lockdown inflicted by the coronavirus pandemic seems to have changed our job descriptions – instead of heading out, riding and telling you about new motorcycles, we’re forced to stay home and research from our laptops to bring you good reads. And hopefully, this blast from the past will be too. How many of us remember Royal Enfield Taurus? Popular in the 1980s and 90s, the Taurus was the only Diesel-powered motorcycle that has ever been mass-produced in India. A Surat-based custom shop has restored one to its original state and that gives us a chance to talk about the Taurus and why it was put to sleep.

So, apparently retro-fitting a diesel engine to Royal Enfield Bullets was quite the trend back in the day. This was an epiphany for RE which decided to launch a Bullet with a factory-fitted 325cc diesel engine. This was also the smallest engine that the manufacturer has ever used on one of its motorcycles.

Lovingly called simply the Bullet Diesel for obvious reasons, the Taurus looked identical to its petrol-powered counterpart except for a whole different view when you’d look down at the engine. ParPin Garage’s restoration job is commendable as it delivers a neat-looking ode to India’s only diesel motorcycle.

But are we saddened by the Taurus’ demise? Not really, no. The only aspect of the bike which is unbeatable is the fuel efficiency – it returned about 80-90 km to a litre. Numbers like that can get today’s commuter motorcycles to stop grinning. However, since it was a 6.5 hp diesel engine, the ride was so marred by vibrations, it could unsettle your shoulder bones and spine, and the speedo never climbed above 65 km/h. The fuel efficiency was the only reason the Taurus was very popular.

Even so, the Taurus’ USP of being a thrifty diesel-powered bike would also be the last nail to its coffin. As is the case with crude diesel engines, the Taurus left behind clouds of black smoke from wherever it passed. This was never going to clear the emissions norms which had by then started getting more serious, eventually leading to its discontinuation.

The Royal Enfield Taurus, however, will remain one of those special rare sightings that you yearn to see. It delivered to the demand in its time, it looked exactly like the motorcycles that army men rode, and it was and will remain India’s only diesel-powered motorcycle.