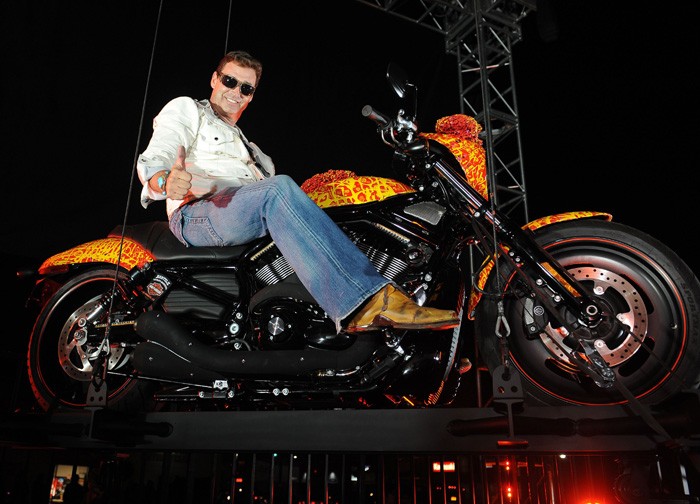 Like with everything else in this world, there are bikes and then there are… bikes. The Harley-Davidson we’re going to talk about today falls in the latter category, of machines that are so expensive they are more like objects of art than actual rides.

Whereas most luxury cars and motorcycles remain practical, this one is less much so. Many rides cost a fortune either because of one-off customizations or the fact that they’re limited edition, or simply just that awesome. This Harley-Davidson is pretty much the same as it was when it left the factory, but coated with a new layer of paint.

Make that more than 37 of them. This is the Harley-Davidson Cosmic Starship, also known as the Million Dollar Harley-Davidson or artists Jack Armstrong’s bike. It’s actually a 2002 V-Rod that has been painted in Armstrong’s Cosmic Extensionalism style.

In other words, this Hog is a rolling, roaring piece of art, a painting on the move. If you can afford to risk damaging it by actually taking it on the road, that is.

As of the time of writing, the Cosmic Starship is back on the market, with an asking price between $15 million and $30 million, since it’s a one-off. It’s been listed for sale by its current owner since 2017 and, should it ever find a buyer, it will go down in history, officially, as the world’s most expensive motorcycle.

Even if it doesn’t, based on the last price it changed hands for, it is still among the top five most expensive bikes in the world: $3 million.

So what’s the deal with it? Why is it so pricey?

As noted above, there is nothing outstanding about the bike itself. It’s a V-Rod without any modifications, chosen because Armstrong, a vocal Harley enthusiast himself, believed it was the perfect, most luxurious canvas for his revolutionary painting style, which took 30 years to perfect.

“The style of the 2002 Harley V-Rod was revolutionary, and it was the most futuristic creation in motorcycles I had ever seen,” he said ahead of the introduction of the bike. “For several years between 2003-2004 when I lived in Switzerland I rode V-Rods with seven-time F1 World Champion Michael Schumacher. So the V-Rod was my only choice for the most expensive motorcycle in history.”

The Cosmic Starship was introduced in October 2010 at Bartels in Marina Del Rey, California, in a ceremony that saw it being dropped from the sky while lit up by $100,000 worth of lights. It was billed the Million Dollar Harley from the start, based on the fact that Armstrong painted it.

In 2012, it sold for $3 million, and it popped up on the market again in 2017: Cosmic Harley says it’s asking price is of $15 million, but Star Global International (which actually commissioned the work) puts it at $30 million. They both seem to agree, however, that its value will go up in the coming years: the figure $250 million is casually being thrown around.

It took Armstrong (who is Neil Armstrong’s nephew) 6 years to complete the job. You wouldn’t be able to say by just looking at it in pictures, but there’s an elaborate technique about this style of painting. It reportedly involved lots of acrylic paint and no less than 37 coats of clear coat on top, a method Armstrong needed 3 decades to master.

What makes Armstrong stand out among other artists is his belief in “the energy that coexists in inter planetary and multi-dimensional extensionalism,” which is reflected in his work. In more specific terms, his work stands out for hidden messages when viewed at different angles or in different lights, and extreme use of color, texture and light. Reportedly, Andy Warhol, with whom he was friends, dubbed him “The Last Wizard.”

What also drives up the price on Armstrong’s art, including this Hog, is the fact that he vowed to never make more than 100 pieces to showcase it and never to touch canvas. He’s never used an art dealer either, so he deals directly with the most exclusive clients. With all that, not much is known about his personal life or his body of work, and there are suspicions about claims he made about the former in the past. Either he’s onto something as an artist, or he may just be a major con who has been able to talk his way to the top by selling the illusion of exclusivity.

Back to the bike, even if never sells for the kind of money it’s being listed at, it’s still very expensive at $3 million. The Cosmic Starship is currently being held in a climate-controlled vault and remains in pristine condition. Whether anyone’s ever ridden it remains a mystery, but for this kind of money, would you risk damaging that which makes it so expensive by taking it out on the road?