E-bikes that look like motorcycles take another hit in Canada 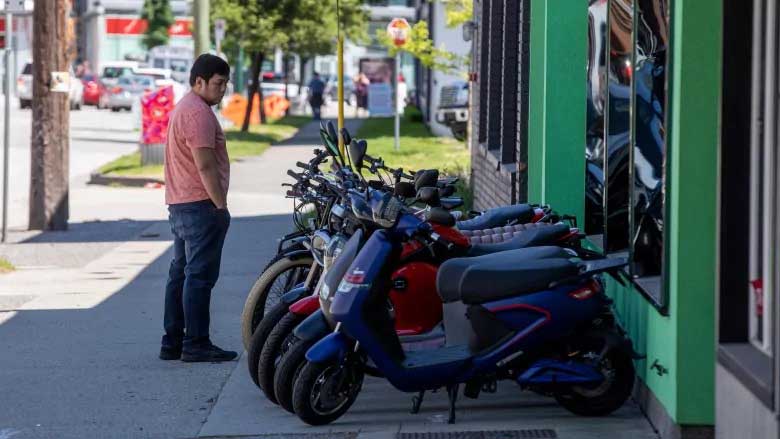 by Maryse Zeidler from https://www.cbc.ca

The British Columbia Court of Appeal has upheld a B.C. Supreme Court ruling that e-bikes designed to look and function more like mopeds or scooters do not meet the province’s definition of a motor-assisted cycle and therefore require a driver’s licence, registration and insurance.

The case was brought forward by Ali Ghadban, who was issued a ticket in Surrey, B.C., in 2018 for riding his Motorino XMr without a driver’s licence and insurance. He said he wasn’t able to obtain them from the provincial insurer, ICBC.

Two of the three Appeal Court justices assigned to the case agreed with the B.C. Supreme Court judge’s decision from May 2020 that found although the Motorino XMr is outfitted with pedals, limited power and a maximum speed of 32 km/h, it doesn’t qualify as a motor-assisted cycle because it’s not designed to be operated primarily by human power.

At the heart of the issue are the XMr’s small pedals, which Court of Appeal Justice Harvey M. Groberman agreed would do little to propel the nearly 115-kilogram bike. Groberman said the XMr is designed to almost exclusively operate as a low-powered electric motorcycle, or as “a very heavy, impractical bicycle.”

Although the XMr meets many of the technical requirements of a motor-assisted cycle as defined in B.C.’s Motor Vehicle Act, Groberman wrote, it doesn’t do so in practice.

“If a piece of legislation defines ‘cat’ as ‘a small four-legged furry mammal that purrs,’ we would not expect that definition to include a dog fitted with a loudspeaker that plays a purring sound,” he said.

Lawyer Dan Griffiths, who represented Ghadban in the case, said his client is a man of modest financial means who relied on the bike to get around.

“He was excited to find a transportation option which was affordable and which also had the added benefit of being environmentally friendly as well,” Griffiths said.

Ghadban, 35, does building maintenance for homeless shelters on the Downtown Eastside, Griffiths said, and has never had a driver’s licence. His client intends to take the case to the Supreme Court of Canada.

But Erin O’Mellin, executive director of cycling advocacy group HUB, said the decision is a step in the right direction.

“[Electric scooters] are much heavier and they move at a much faster speed, so the consequence of a collision with this kind of scooter and someone on a regular bicycle would be much more dramatic,” she said.

B.C.’s Motor Vehicle Act hasn’t been updated in 50 years, O’Mellin said, and it doesn’t deal with all of the the new electric mobility devices that have come onto the consumer market in that time, including electric standup scooters and skateboards.

She said it’s important that devices such as e-scooters be included so that drivers are aware of their responsibilities.

“If you have a larger, faster-moving vehicle, there’s more onus on you to have training to make sure that those roads are safe for all users,” O’Mellin said.

In a written statement, the Ministry of Public Safety said the province and the provincial insurer, ICBC, “are examining impacts with respect to products now confirmed by the courts to be non-compliant to operate on public highways, such as the Motorino XMr.”

After the B.C. Supreme Court decision in May, ICBC made a few subtle changes to its webpage on motor-assisted cycles.

The latest version no longer includes an image of what looks like an electric scooter alongside an e-bike under the subheadings “electric bikes” and “motor assisted cycles.”

Steve Miloshev, owner of the Motorino store in Vancouver, said the decision is disappointing because so many of his clients rely on e-scooters for transportation — especially during the COVID-19 pandemic, when many people want to avoid public transit.

“I am upset for the thousands of our customers who have invested thousands of dollars in their clean transportation,” he said in an email to CBC News.

Miloshev said he believes his scooters and the customers who use them have been unfairly targeted, compared with devices such as electric standup scooters.

However, those scooters were never legal on B.C. roads.

Miloshev said he intends to focus his business on the “countless” new technologies that are available.

“As a company that pioneered light electric transportation in Canada, we are very optimistic in the evolution of environmental and practical solutions for transportation,” he said.