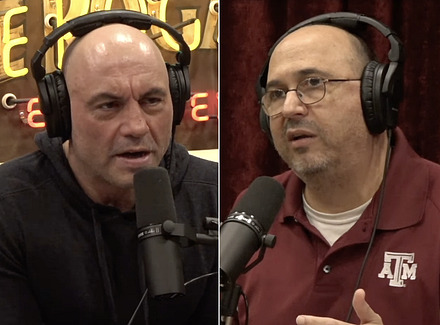 In Fossil Future I refute literally hundreds of myths about fossil fuels. Here are 20 myths that 11,000,000 people heard on Joe Rogan’s podcast this year from Andrew Dessler, a climate scientist/activist who misrepresented himself as an energy expert.

Tonight Andrew Dessler will be debating physicist Steve Koonin, author of Unsettled, whom Dessler unconscionably smeared on Joe Rogan as akin to a tobacco lobbyist. The debate will be live in NYC and streamed.

Truth: Fossil fuels are a uniquely cost-effective form of energy, which is why they are 80% of global energy and still growing. Rapidly reducing fossil fuels, in a world that needs far more energy, is catastrophic.¹

Myth 2: Solar and wind are cheap.

Truth: Solar and wind are unreliable, parasitical sources of energy that add costs to the grid.

Claims of “cheapness” are based on ignoring the full costs of solar + wind—above all the cost of a reliable grid that gives them 24/7 life support.²

Myth 3: Solar/wind is cheaper than fossil fuels because Lazard’s “Levelized Cost of Electricity” (LCOE) is lower for solar/wind.

Truth: LCOE, by Lazard’s own admission, doesn’t include many costs of solar/wind—above all the cost of a reliable grid needed for 24/7 life support.³

Myth 4: Solar and wind are “winning in the marketplace,” outcompeting fossil fuels and nuclear with superior economics.

Truth: Unreliable, parasitical solar and wind are only “winning” when given massive preferences—mandates, subsidies, and no penalty for unreliability.⁴

Truth: This projection is of electricity (20% of energy) not all energy—and just refers to when sunlight and wind are at their peak, not most of the time. And it depends on massive political favoritism.⁵

Truth: No one has come close to even 50% unreliable solar/wind without huge dependence on reliable neighbors. And without the flexibility and scale that only natural gas provides.⁶

Myth 7: Anti-fossil fuel activists just want the most energy for the least CO2.

Truth: Anti-fossil-fuel activists are hostile to hydro and nuclear. E.g., Andrew Dessler said this year “I agree that hydro is not something to expand” and has attacked nuclear for years.⁷

Myth 8: Nuclear is too expensive, so we should use solar/wind instead.

Truth: Solar/wind can’t provide reliable energy; nuclear can. And nuclear is only expensive because it has, with the help of many “green” activists, been falsely labeled unsafe and effectively criminalized.⁸

Myth 9: Academics know how to cheaply power the world with mostly solar + wind.

Truth: All their untested schemes involve many ruinous, unaccounted-for costs—e.g., a crash program of unprecedented mineral/infrastructure development in an anti-development political environment.⁹

The academics who have supported fossil fuel restrictions based on the false promise that their untested schemes full of false assumptions could replace fossil fuels in a world that needs far more energy, are irresponsible cranks who have brought about a global energy crisis.¹⁰
Myth 10: The TX winter blackouts were a failure of fossil fuels, especially natural gas.

Myth 11: Hugely varying estimates of “the social cost of carbon” mean that economists warning about the costs of reducing CO2 can’t be trusted.

Truth: These variations show that little definite is known about any net harm from CO2. But the huge harms of reducing CO2 are certain.¹²

Myth 12: Replacing fossil fuels with solar/wind will make us more secure because we’ll depend less on hostile countries.

Truth: Not only are solar/wind incapable of replacing fossil fuels, but the control of their supply by China dwarfs any nation’s influence over fossil fuels.¹³

Truth: At some point future technologies will enable us to reverse the rise in CO2 levels if we want. But nothing can reverse mass-death caused by trying to rapidly eliminate CO2 emissions.¹⁵

Myth 15: Because we could reduce CFCs without disaster, we can do the same for CO2 emissions.

Truth: Rising CO2 levels will continue to come with the huge agricultural benefits of oil to power equipment and natural gas for fertilizer. And with GMO technology, higher CO2 can be leveraged to make crops grow even more.

Myth 17: We should be terrified of a 5°C temp rise, because that’s ½ the distance from an ice age.

Truth: Global temp rises are not the same kind of threat as global temp decreases, because human life, like most life, does better when it’s warm.

Myth 18: Melting permafrost could be a terrible “tipping point” that will lead to rapid, dangerous warming.

Truth: Significant methane release from permafrost is a very speculative and slow-paced potential impact that a more advanced world will be able to deal with if needed.¹⁸

1. Ignores how fossil fuels extend every life on Earth

3. Ignores the fact that fossil fuels can be burned very cleanly.¹⁹

Myth 20: The anti-fossil-fuel movement is leading to better sources of energy.

Not only were 20 myths about fossil fuels dangerously spread on Joe Rogan to 11 million people by Andrew Dessler, Dessler has not corrected even one of them. This despite the fact that I have publicly refuted most of them in debates with him. (See the footnotes.)
Tonight Andrew Dessler will be debating physicist Steve Koonin, author of Unsettled, whom Dessler unconscionably smeared on Joe Rogan as akin to a tobacco lobbyist. The debate will be live in NYC and streamed. Order your tickets here from The Soho Forum.

While you’re waiting for the Dessler/Koonin debate to happen, watch my two debates with Dessler and see why neither he nor any other leading anti-fossil-fuel activist will agree to a long-form debate with me in a major forum.

Today’s energy crisis, which is threatening Europeans with freezing and industrial collapse this winter, and threatening 10s of millions with starvation, is the fault of the global anti-fossil-fuel movement. I will continue to debate/defeat these people until they are stopped.
If you want to learn the full truth about the future of energy, read my new book Fossil Future. It’s been out for 2.5 months and despite its phenomenal success not one advocate of fossil fuel elimination has even attempted to refute it. (They’ve just smeared or straw-manned me.)

“Energy Talking Points by Alex Epstein” is my free Substack newsletter designed to give as many people as possible access to concise, powerful, well-referenced talking points on the latest energy, environmental, and climate issues from a pro-human, pro-energy perspective.