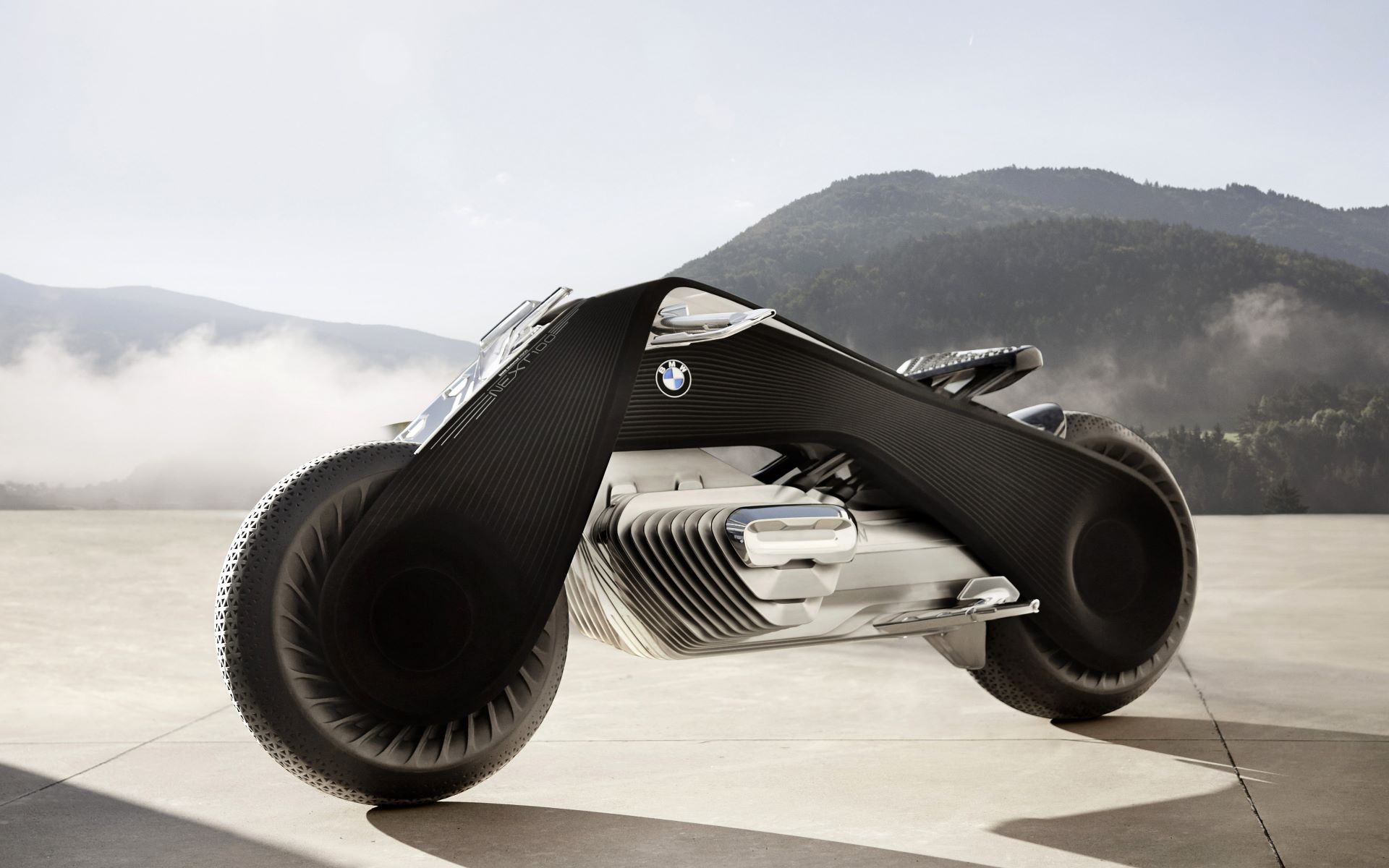 BMW has done it again. Offering us yet another concept vehicle that surpasses all previous bounds and expectations.

When I first saw it, a small lump of happiness stuck in my throat, nearly made mew cry. And for good reason. Just look at this wonderfully geometric symphony. You wouldn’t even know what it is if it wasn’t for the wheels and engine screaming “Batman’s motorcycle!!”. In this case, since it’s German, it’s probably a better fit for Fledermaus Mann!

In case you missed the in your face design, the BMW emblem should give you an idea of what it is you’re about to touch. It’s called the Vision Next 100, and it is a motorcycle like no other. Just the design itself is one only seen in movies or on concept projects. Thanks to BMW, however, this motorcycle is now a reality.

“When we develop a motorcycle,” adds Edgar Heinrich, “we are usually thinking around five to ten years in the future. So taking a look further into the future was especially exciting for us and highly appealing.”

With that in mind, BMW worked toward a cycle that is ready to integrate into the future cities our world seems to be developing. Just to give you an idea of what BMW Motorrad has done, please understand that in the photo gallery, the only product that isn’t part of the bike is the rider. But even then, it has to be a naked rider, as even the apparel is specifically designed for the motorcycle and works in tune with it to offer a more pleasing ride.

So, to explain this to you I’m gonna start from the top down. In the gallery I’m sure you’ve noticed that the rider has a pair of gigantic but chic glass-o-goggles. Those goggles are the only bit of protection that the rider needs. I’ll explain in a minute as to why. The goggles function as a windscreen for the rider’s eyes but also as the instrument panel. On them, all information any rider may need is projected, from speed and road tilt, to hazards and even a map showing selected routes. All of it accessed by positioning the rider’s head at different vertical angles. Looking straight up activates a rear-view function. All information seems to be displayed in a manner similar to aviation controls. Or crime-fighting, masked vigilantes.

Next up is the clothing line. BMW moved away from the classic leather apparel that seems to dominate the motor market, focusing rather on lightweight and flexible fabrics. The suit, because that what it basically is, molds to the rider’s body during cruising and offers support to areas on the body that would normally be put under stress during certain riding positions. For example, at higher speeds the neck region of the suit fills with air in order to relieve pressure on the spine to offer a more comfortable ride.

A diverse number of sensory located throughout the suit activate to respond to diverse changes during the ride. Some sensors activate to inform you of turn direction while others when reaching the maximum tilt during a turn. Now, the suit itself doesn’t do much protecting against road-rash, but then again, it doesn’t need to. Uhh, right. No protection?

The Vision Next 100 has an ace up its sleeve. Excuse me, not an ace, but a royal flush. She’s able to do a tight wire walk with some very neat self-balancing technology. Yes, sir! She can stand on a dime. No kickstand needed. No rider. No support. She features an assistance function that allows her to basically stay upright no matter the rider’s capabilities. How? Nobody knows. Does it even matter, really? Just think about it.

She’s able to control the angle at which you take a turn. She’s able to stay upright at a red light while keeping the driver in riding position. No more legs down or legs up. This means she’s perfect for riders of any level. But don’t think that because she can be controlled by a noob, she won’t give a pro the ride of their life. On the contrary, the self-balancing mechanism and software, are specifically designed to actually enhance your ride, and not diminish it.

Now the engine. The engine is just, wow! Those who know motorcycles also know that the engine compartment is a huge influence on the vehicle’s aerodynamics. That being said, you may think that this engine serves no aerodynamic functions, and you’d be wrong, just as I was. The Vision Next 100 hides a feature that made my jaw drop. When at rest, aside from remaining upright on its own, the Vision Next’ 100’s engine is seemingly compact. but the moment you hop on the bike, the engine compartment begins to stretch to the sides like the gills on a shark.

Then you start to ride, faster and faster, and continue to notice that your engine is growing along with your speed. It does this in order to offer the optimal aerodynamics needed for the speed and weather conditions, but also to offer the much-needed protection against any eventual mishaps the Vision Next 100 couldn’t foresee.

The body shape for this baby is set-up to keep the rider in a roadster position. Using carbon and aluminum as the base materials for design and construction, she’s able to offer a wonderful blend of color, ergonomics, design and functionality. The frame, however, with its wild design, includes a functionality feature that allows it to flex depending on the direction the handlebars are turned toward. Meaning if you want to turn right, you won’t have a pivot point for your fork, hell, there isn’t even a fork to begin with, instead the frame will bend or contract where needed to offer the turning capability.

And depending on how fast you’re going the frame will either tense up or relax to offer much needed protection to the rider in case of accidents. A matte-black finish to the carbon ‘Flexframe’ and the polished aluminum engine block offer it a visual balance only rivaled by its self-balancing technology.

As we can see, even the tires look like they’ve got to do some sort of something. Heck, everything else on this thing does, why would the tires be of any exception? The tires do offer some extra functionality aside from just rolling. They feature a dampening function, which offers a smooth ride and adapts to the terrain you are riding on to keep that comfort going

Got any words? Or do you just want one too?