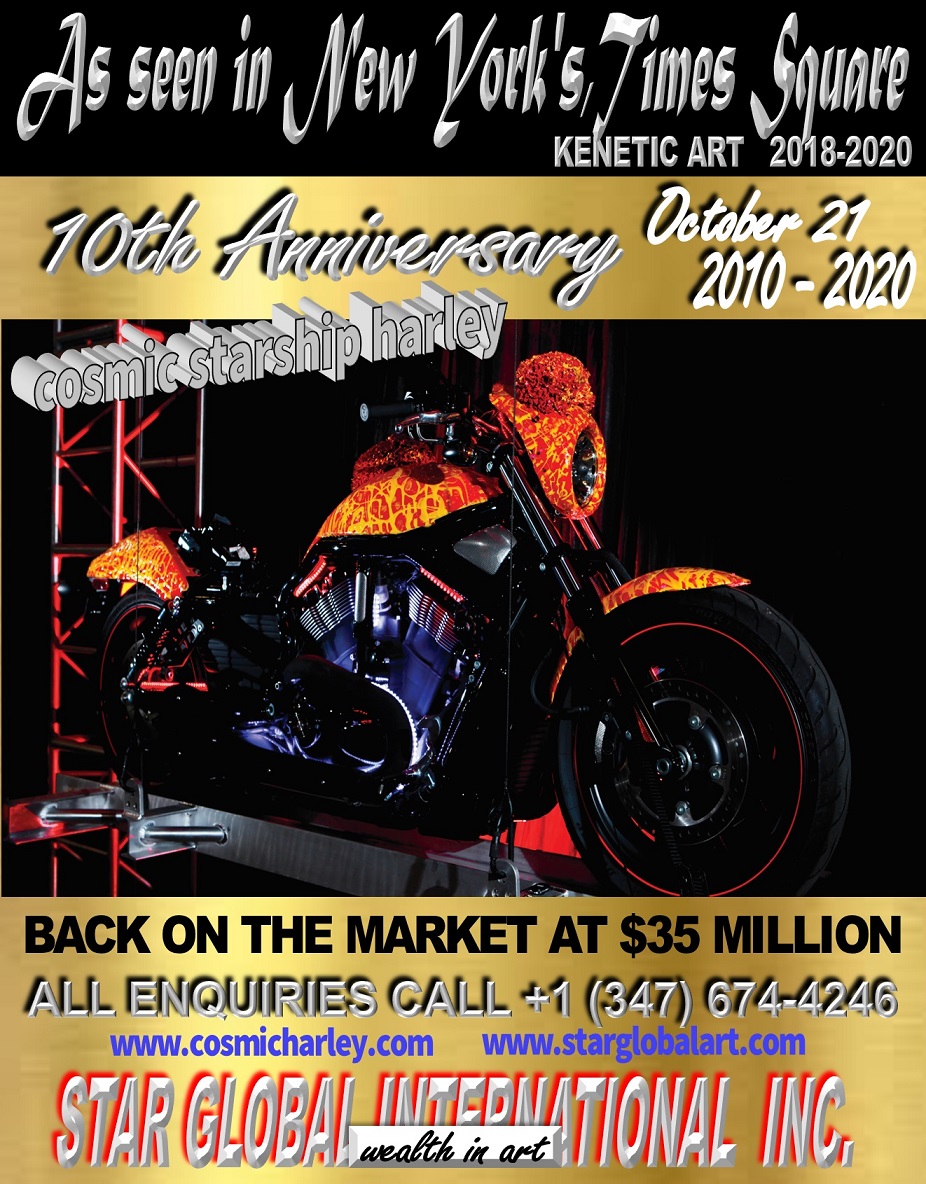 The Cosmic Harley launched at $1 million sold in 2012 for $3 million and paved the way for the creation by others of multi-million dollar motorcycles.

MARINA DEL REY, CALIFORNIA, UNITED STATES OF AMERICA, October 21, 2020 /EINPresswire.com/ — The Cosmic Starship Harley Davidson Motorcycle is officially 10 Years old today and is currently priced at $35 million. It premiered at a Red Carpet Gala event at Bartels In Marina del Rey, California, in 2010, and was filmed by the world press. As reported in the DuPont Registry , Shelby 50th Anniversary Edition, the Million Dollar Harley sold in 2012 for just over $3 million.

Bill Bartel of Bartel’s, the main California Harley Davidson Dealership, said, “Harley Davidson has been in business since 1903, and this Cosmic Harley, launched just 10 years ago, is the most famous motorcycle ever created. The Red-Carpet Gala Event hosted here rivaled most all movie premieres in California, as artist Jack Armstrong landed from the sky in spectacular style, amid lights and sound, astride the Motorcycle and Lorenzo Lamas rode it along the red carpet into the showroom. The event was, by any measure, an extraordinary feat”

Spokesman for Star Global International Inc., Iain Hammer, said, “This $1/2 Million spectacular launch was the brainchild of CEO Robert Star who conceived the idea to promote this exceptional artist to a new generation of art lovers, much in the same way as the artist’s friend, Andy Warhol, promoted himself with his Campbell’s soup can. Warhol called the artist ‘The Last Wizard of Art’. Jack Armstrong used several layers of paint plus 37 coats of clear and took 6 months to finish the project. The Cosmic Harley just completed a 2-year digital retrospective in New York’s, Times Square and is still being published in luxury magazines such as Life of Luxury and You’ve Arrived along with other major media outlets worldwide.

Jack Armstrong’s Cosmic art is driven by a mystical force that emanated from ‘The Black Star Sapphire of Queensland’. He had seen this gemstone, as a child, in the Smithsonian Museum and was hypnotized by it. He purchased the gemstone some 45 years later and it is estimated to be worth $100 million. The gemstone directed him to create a specific number of paintings in a very specific manner. Each of his 100 paintings is deliberately constructed with the lines, figures and movements, creating the appearance of an accidental, non-compositional technique. Embedded in the colorful and multi-layered acrylic paint, are mysterious messages and words strategically placed to deliver the cosmic energy of the painting to the viewer.

Armstrong, known as the rebel artist, eschewed the top galleries, dealers and auction houses because of their bad practices and set out to self-promote with his unique art form he calls ‘Comic Extensionalism’ abbreviated to ‘Cosmic X’. Armstrong’s 100 only unique, colorful and multilayered canvases are expected to rival the price of Basquiat’s $110 million, achieved at auction in 2017 and possibly become the most sought after and highly valued artist in history. Indeed, Alice Walton the Walmart billionaire is listed amongst collectors of his art and has 2 of his paintings in her private collection.

A movie about the life of this illustrious artist, who by chance is related to Neil Armstrong the first man to walk on the moon, staring Damian Chapa as Armstrong and Eric Roberts as Andy Warhol will be released soon. He has 3 Wikipedia entries and several hundreds of media references that reach every corner of the earth. Any researcher, a mere decade after the famous Cosmic Starship launch, must surely conclude that Armstrong’s Cosmic Harley together with his extremely limited 100 Cosmic paintings are guaranteed to rise in value and make an important and courageous statement in the annals of art history.”

You can always remake the money but you can never remake the art.”
— William Acquavella -Veteran NYC Art Dealer