Following six successful years at the Sturgis Motorcycle Rally, years that have seen AMD's World Championship of Custom Bike Building become established and respected as a leading showcase for innovative custom motorcycle design and engineering, the 9th annual World Championship at Sturgis this August (5th thru 8th) will be the last to be staged at the rally.

From next year's 10th annual, the World Championship of Custom Bike Building will debut at BIG BIKE EUROPE, at Essen in Germany (May 10th thru 12th 2013) and thereafter be staged annually at BIG BIKE EUROPE every May.

Slated as the all new 'headquarters expo' for the custom parts, accessory, workshop, tuning and performance industry, BIG BIKE EUROPE will conjoin the World and European Championships. 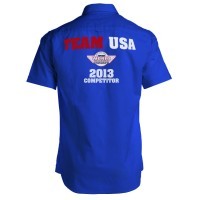 The AMD affiliate show will feature $7,000 in FreeStyle Class prize money (with trophies and prizes down to 5th place) courtesy of Harley-Davidson.

In addition, BIG BIKE EUROPE and the AMD World Championship of Custom Bike Building are announcing that the highest placed domestic US based competitor in the FreeStyle Class at Milwaukee will also be awarded automatic qualification to compete at the 2013 10th annual World Championship at BIG BIKE EUROPE in May next year as a member of 'TEAM USA'.

Commenting on the new direction the AMD World Championship program is taking, AMD publisher and founder Robin Bradley said: "Sturgis has served us well down the years and we'd especially like to thank Harley-Davidson for their support in helping us to be able to stage the World Championship at the rally.

"However, the news about the AMD affiliate custom bike competition at the Harley-Davidson Museum sees our relationship with Harley taking a new and exciting direction. I have always maintained that if there were just one, and one only, better place for AMD to be able to be showcasing custom motorcycle design and engineering excellence in the United States than at the Sturgis Motorcycle Rally, then Milwaukee, the mother-lode of our industry, would be it."