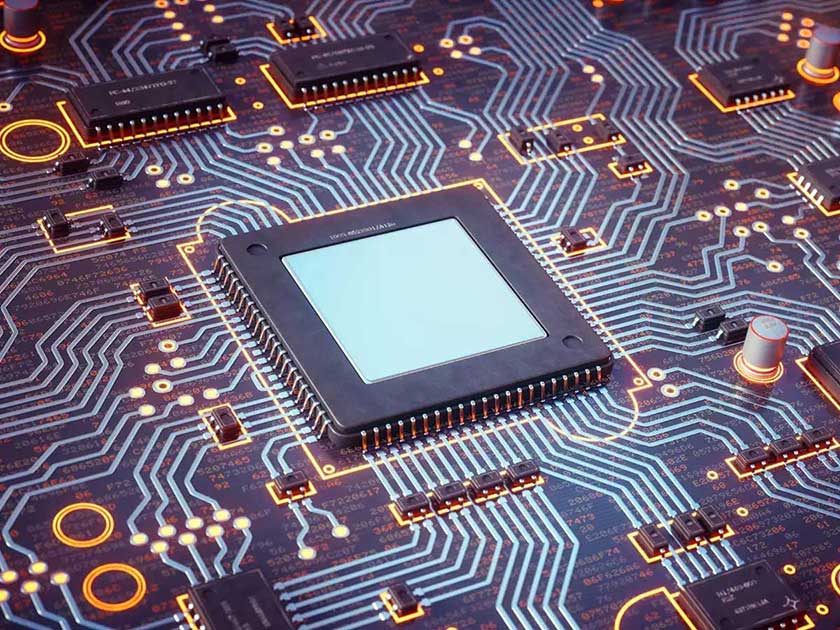 The chip crunch was born out of an understandable miscalculation as the coronavirus pandemic hit last year. When Covid-19 began spreading from China to the rest of the world, many companies anticipated people would cut back as times got tough.

To understand why the $450 billion semiconductor industry has lurched into crisis, a helpful place to start is a one-dollar part called a display driver.

Hundreds of different kinds of chips make up the global silicon industry, with the flashiest ones from Qualcomm Inc. and Intel Corp. going for $100 apiece to more than $1,000. Those run powerful computers or the shiny smartphone in your pocket. A display driver is mundane by contrast: Its sole purpose is to convey basic instructions for illuminating the screen on your phone, monitor or navigation system.

The trouble for the chip industry — and increasingly companies beyond tech, like automakers — is that there aren’t enough display drivers to go around. Firms that make them can’t keep up with surging demand so prices are spiking. That’s contributing to short supplies and increasing costs for liquid crystal display panels, essential components for making televisions and laptops, as well as cars, airplanes and high-end refrigerators.

“It’s not like you can just make do. If you have everything else, but you don’t have a display driver, then you can’t build your product,” says Stacy Rasgon, who covers the semiconductor industry for Sanford C. Bernstein.

Now the crunch in a handful of such seemingly insignificant parts — power management chips are also in short supply, for example — is cascading through the global economy. Automakers like Ford Motor Co., Nissan Motor Co. and Volkswagen AG have already scaled back production, leading to estimates for more than $60 billion in lost revenue for the industry this year.

The situation is likely to get worse before it gets better. A rare winter storm in Texas knocked out swaths of U.S. production. A fire at a key Japan factory will shut the facility for a month. Samsung Electronics Co. warned of a “serious imbalance” in the industry, while Taiwan Semiconductor Manufacturing Co. said it can’t keep up with demand despite running factories at more than 100% of capacity.

“I have never seen anything like this in the past 20 years since our company’s founding,” said Jordan Wu, co-founder and chief executive officer of Himax Technologies Co., a leading supplier of display drivers. “Every application is short of chips.”

2021-semiconductors-chips-shortage-inline
The chip crunch was born out of an understandable miscalculation as the coronavirus pandemic hit last year. When Covid-19 began spreading from China to the rest of the world, many companies anticipated people would cut back as times got tough.

“I slashed all my projections. I was using the financial crisis as the model,” says Rasgon. “But demand was just really resilient.”

People stuck at home started buying technology — and then kept buying. They purchased better computers and bigger displays so they could work remotely. They got their kids new laptops for distance learning. They scooped up 4K televisions, game consoles, milk frothers, air fryers and immersion blenders to make life under quarantine more palatable. The pandemic turned into an extended Black Friday onlinepalooza.

Automakers were blindsided. They shut factories during the lockdown while demand crashed because no one could get to showrooms. They told suppliers to stop shipping components, including the chips that are increasingly essential for cars.

Then late last year, demand began to pick up. People wanted to get out and they didn’t want to use public transportation. Automakers reopened factories and went hat in hand to chipmakers like TSMC and Samsung. Their response? Back of the line. They couldn’t make chips fast enough for their still-loyal customers.

A year of poor planning led to carmakers’ massive chip shortage
Himax’s Jordan Wu is in the middle of the tech industry’s tempest. On a recent March morning, the bespectacled 61-year-old agreed to meet at his Taipei office to discuss the shortages and why they are so challenging to resolve. He was eager enough to talk that interview was scheduled for the same morning Bloomberg News requested it, with two of his staff joining in person and another two dialing in by phone. He wore a mask throughout the interview, speaking carefully and articulately.

Wu founded Himax in 2001 with his brother Biing-seng, now the company’s chairman. They started out making driver ICs (for integrated circuits), as they’re known in the industry, for notebook computers and monitors. They went public in 2006 and grew with the computer industry, expanding into smartphones, tablets and touch screens. Their chips are now used in scores of products, from phones and televisions to automobiles.

Wu explained that he can’t make more display drivers by pushing his workforce harder. Himax designs display drivers and then has them manufactured at a foundry like TSMC or United Microelectronics Corp. His chips are made on what’s artfully called “mature node” technology, equipment at least a couple generations behind the cutting-edge processes. These machines etch lines in silicon at a width of 16 nanometers or more, compared with 5 nanometers for high-end chips.?

The chip’s makers have seen their shares soar with strong demand
The bottleneck is that these mature chip-making lines are running flat out. Wu says the pandemic drove such strong demand that manufacturing partners can’t make enough display drivers for all the panels that go into computers, televisions and game consoles — plus all the new products that companies are putting screens into, like refrigerators, smart thermometers and car-entertainment systems.

There’s been a particular squeeze in driver ICs for automotive systems because they’re usually made on 8-inch silicon wafers, rather than more advanced 12-inch wafers. Sumco Corp., one of the leading wafer manufacturers, reported production capacity for 8-inch equipment lines was about 5,000 wafers a month in 2020 — less than it was in 2017.

No one is building more mature-node manufacturing lines because it doesn’t make economic sense. The existing lines are fully depreciated and fine-tuned for almost perfect yields, meaning basic display drivers can be made for less than a dollar and more advanced versions for not much more. Buying new equipment and starting off at lower yields would mean much higher expenses.

“Building new capacity is too expensive,” Wu says. Peers like Novatek Microelectronics Corp., also based in Taiwan, have the same constraints.

That shortfall is showing up in a spike in LCD prices. A 50-inch LCD panel for televisions doubled in price between January 2020 and this March. Bloomberg Intelligence’s Matthew Kanterman projects that LCD prices will keep rising at least until the third quarter. There is a “a dire shortage” of display driver chips, he said.

LCD Prices Are Surging
Aggravating the situation is a lack of glass. Major glass makers reported accidents at their production sites, including a blackout at a Nippon Electric Glass Co.’s factory in December and an explosion at AGC Fine Techno Korea’s factory in January. Production will likely remain constrained at least through summer this year, display consultancy DSCC Co-founder Yoshio Tamura said.

On April 1, I-O Data Device Inc., a major Japanese computer peripherals maker, raised the price of their 26 LCD monitors by 5,000 yen on average, the biggest increase since they began selling the monitors two decades ago. A spokeswoman said the company can’t make any profit without the increases due to rising costs for components.

All of this has been a boon to Himax’s business. Sales are surging and its stock price has tripled since November.

But the CEO isn’t celebrating. His whole business is built around giving customers what they want, so his inability to meet their requests at such a critical time is frustrating. He doesn’t expect the crunch, especially for automotive components, to end any time soon.

“We have not reached a position where we can see the light at the end of tunnel yet,” Wu said.