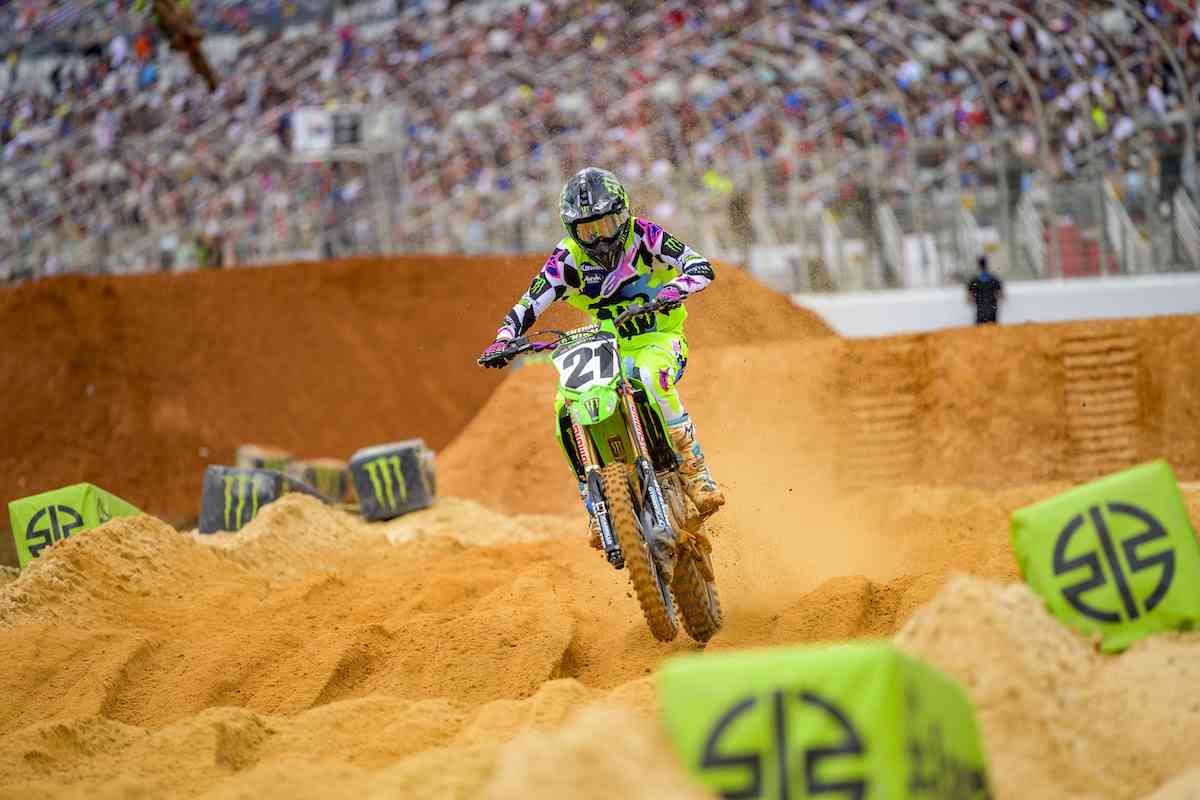 Foothill Ranch, Calif. (April 17, 2022) – Round 14 of the Monster Energy® AMA Supercross Championship brought riders from across the country to Atlanta Motor Speedway for a unique racetrack in the infield of the iconic racing venue. Monster Energy Kawasaki rider Jason Anderson claimed his fourth win of the season with a commanding performance in the 450SX Main Event. Meanwhile, Monster Energy/Pro Circuit/Kawasaki’s Jo Shimoda and Austin Forkner earned fourth place and seventh place respectively in the 250SX East/West Showdown.

Anderson and the rest of the Monster Energy Kawasaki team arrived to Atlanta Motor Speedway on Saturday morning to find the grounds flooded from overnight rainfall. As the rain continued through the morning hours, scheduling adjustments were made to preserve the track. The revised schedule granted the riders in each classification a single 13-minute timed qualifying session prior to the start of the racing program. Adding to the challenge of learning a track in such short time, the specially designed Atlanta circuit hosted one of the longest starts in Supercross history, multiple whoop sections and over twelve turns, altogether producing the longest lap times so far this season. Knowing his time on the track was limited, Anderson launched straight out to a high pace on lap one of the timed session. The No.21 KX™450SR rider battled at the top of the leader board for the entire session as he made the most of the slick conditions. When the session concluded, Anderson recorded the second fastest time of the morning with a 1:25.286.

At the start of the first 450SX Heat Race, Anderson emerged from the first turn in second position. With dryer track conditions and increased traction, Anderson quickly turned up the pace from his qualifying laps and took control of the lead before the end of Lap 1. The New Mexico native responded to pressure from the current points leader by improving his lap times as the race progressed. There was a brief exchange for the lead position on Lap 5 before a crowd animating pass while sliding around the inside of one of the track’s sweeping 180 turns moved Anderson back into the top spot. When the checkered flag flew, Anderson was over four seconds clear of the competition, claiming his fifth heat race win of the season.

When the gate dropped for the 450SX Main Event, Anderson once again launched his KX™450SR out to the front of the pack. The podium positions were tightly contested for the opening laps as Anderson tactfully moved passed his main championship rivals. On Lap 3, Anderson gained control of the lead by capitalizing on a mistake from the competition. The Atlanta crowd soon erupted again as Anderson took advantage of the clear track in front of him to start jumping an impressive triple-quad rhythm section before the finish line. Continuing to jump the rhythm lap after lap, igniting the crowd consistently, Anderson steadily built a sizeable lead over the riders behind. By Lap 11, the Monster Energy Kawasaki rider was more than eight seconds ahead of the closest competitor. With a nearly perfect race from start to finish, Anderson crossed the checkered flag first, lighting the Monster Energy fire cannons and securing his fourth Monster Energy Supercross win of 2022.

“It seemed like we might have a mudder this morning but, the dirt came around after the sun showed up around mid-day. By the time my Main Event started, the track was gnarly but, we’re in a great spot with the bike so I was able to keep pushing the pace through the tough conditions. Even though the whoops were cupped out and edgy, the bike was consistent and predictable, so I kept charging across them every lap. The whole team has put in a lot of effort to have the KX™450SR working as good as it is right now so hopefully we can enjoy a few more of these wins before the season ends.”
– Jason Anderson

Returning to the 250SX Eastern Regional Championship, Forkner joined his Monster Energy/Pro Circuit/Kawasaki 250SX Western Regional teammate Shimoda in Atlanta for the first East/West Showdown of the year. In one of the first groups to take to the wet track, Forkner proved he hasn’t missed a beat by jumping right to the top of the 250SX East qualifying leaderboard. When his qualifying session concluded, the Missouri native had the second fastest lap time with a 1:28.808. In the 250SX West qualifying, Shimoda made himself acquainted with the track by exploring a variety of different lines and setting the sixth fastest lap time with a 1:30.773. 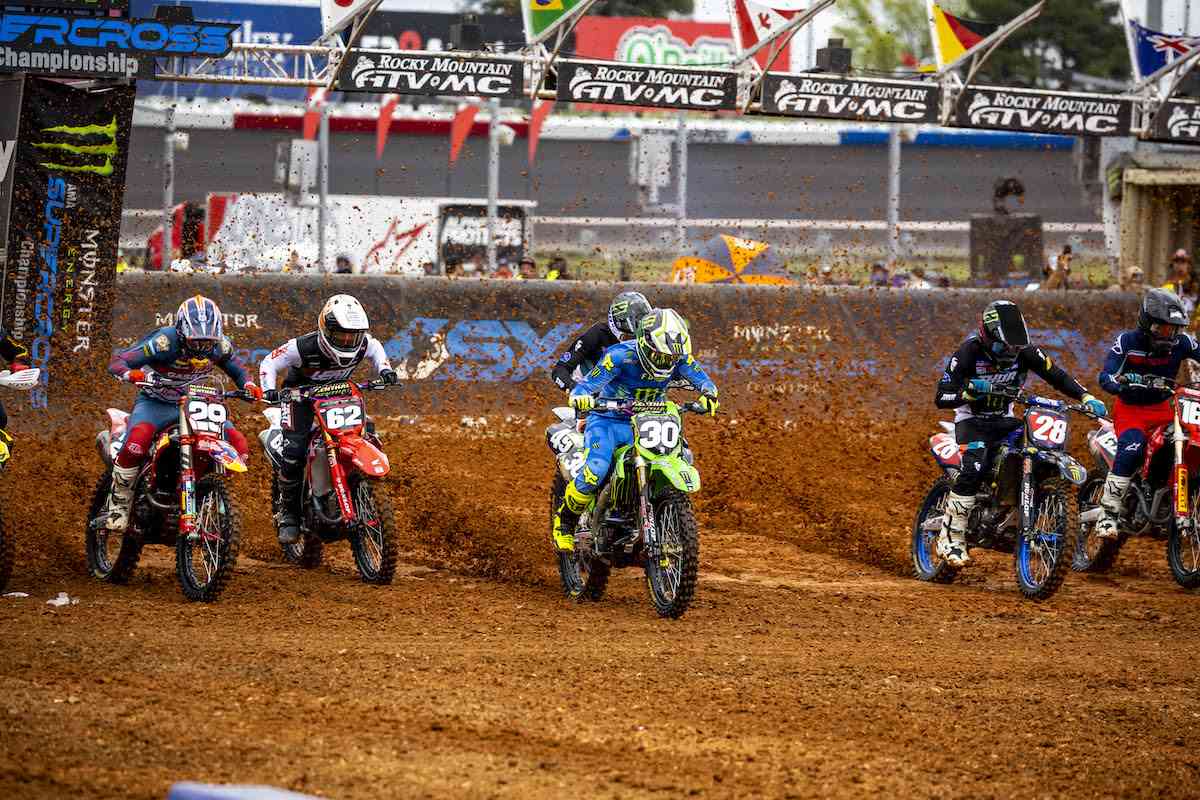 When the 250SX East Heat Race rounded the first turn, Forkner found himself ahead of only one rider as he narrowly avoided a first turn crash. The No.33 KX™250 rider made quick moves through the opening lap, however, passing his way into seventh by the end of Lap 1. Despite racing through traffic on the wet track, Forkner began setting the fastest laps of the race. Forkner passed at least one rider each lap while rapidly closing the distance between himself and the leader. When the white flag waved, Forkner was up to third in the running order but, the tenacious rider wasn’t settled. On the final lap, the fans at Atlanta Motor Speedway roared with cheers as Forkner made two daring passes to claim the 250SX East Heat win by a thrillingly slim margin and establish himself as a contender to win the 250SX East/West Showdown.

At the start of the 250SX West Heat race, Shimoda proved he had made gains with his starts by launching out to the early lead. Shimoda led the opening lap before a couple minor mistakes on Lap 2 forced him to relinquish the position and settle into third place. The Japanese-born rider matched pace with the riders ahead as a battle for the top five positions ensued for the better portion of the qualifying race. On the final lap, Shimoda lost one more position before finishing out the race in fourth place with a direct transfer to the 250SX East/West Showdown.

When the gate dropped for the 250SX East/West Showdown Main Event, the No.30 KX™250 rider Shimoda rocketed out to the holeshot and early lead while Forkner quickly made his way forward from sixth. After a few swift passes by Forkner, the Monster Energy/Pro Circuit/Kawasaki duo occupied two of the three podium positions for the opening laps with Shimoda setting the pace out front and amassing a roughly two second gap over the rest of the field. On Lap 3, Forkner lost a position after the split sand section and settled into fourth until he eventually dropped back to seventh due to a small crash in a rutted corner a few laps later. Meanwhile, Shimoda proved his grit by battling for podium contention and withstanding pressure from the respective championship challengers of each regional series through the first 10 laps of the race. Shimoda balanced intensity with finesse on the non-traditional supercross track to maintain control of third position in the running order until he was overtaken through the whoops while approaching the white flag. Shimoda challenged back for a final lap battle over the last podium position but ultimately crossed the finish in fourth place. Forkner regained his momentum late in the race and finished with a respectable seventh place result.

Shimoda’s fourth place finish in Atlanta marks his fourth top-five of the season and moves him to only two points shy of fourth in the 250SX Western Regional Championship points standings.

Forkner’s seventh place finish secures his third top-ten result of the season as the Monster Energy/Pro Circuit/ Kawasaki rider had an impressive return to the 250SX Eastern Regional Championship.

“This weekend my starts were really good in the heat and the Main Event so that is nice progress on something I’ve been working to improve. At the beginning of the main I felt strong and was comfortable out front with the lead but, I think my speed was a little bit off this weekend, so I ended up being passed by a few riders. I want to be back on the podium, so I wouldn’t say that I’m satisfied with fourth place but, there are positives to take away from this weekend and we will keep trying to be better.”
– Jo Shimoda

“I’ve been eager to get back to racing and definitely wanted to show that I’m a contender for wins this year. In the Heat Race, I was really happy with my riding. To come through the whole field and get a win with a last lap pass on last weekend’s overall winner was a good way to get back into the swing of things. I’ve only been back on the bike about a week now, so I was really happy with my race craft and I think I was on track to have another strong performance in the Main Event until I crashed while running in third. Overall, it was great to be racing again and I’m ready to fight for some wins before the championship ends.”
– Austin Forkner