Unlucky end to French Grand Prix for Lowes and Fernandez 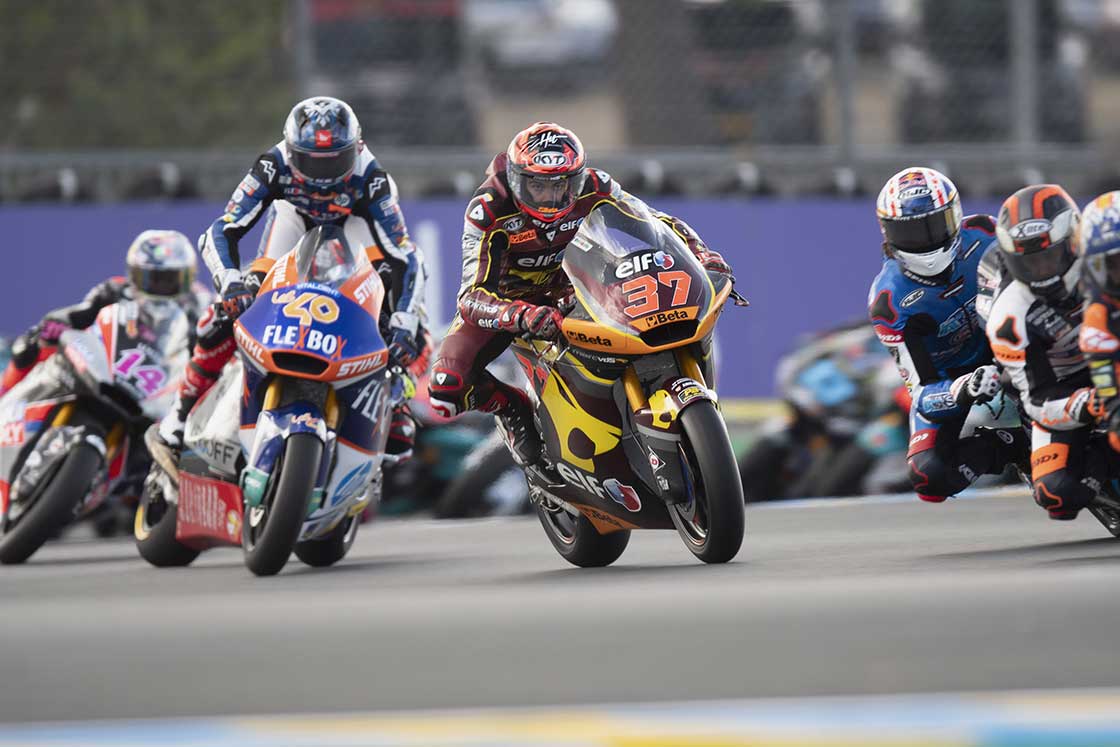 Both Elf Marc VDS Racing Team riders crashed out of promising positions in the early laps at Le Mans after showing podium potential in tricky conditions.

After heavy rain through the morning, the 2.6-mile Le Mans Bugatti Circuit was soaking wet for Sunday’s warm-up sessions, but dried sufficiently to give riders a clear tyre choice ahead of the 25-lap Moto2 race.

All the field ran slick tyres on a track with numerous wet patches, providing a real challenge for the field. Both Augusto Fernandez and Sam Lowes unfortunately crashed out when fighting for the podium places.

But there was heartbreak for the rider from the Balearic Islands on the second lap, when he crashed out of a podium place at turn 11 when hitting a damp patch.

As a result of a second DNF of the year, Augusto drops three places in the championship to twelfth with 23 points to his name.

“We will work to arrive stronger in Mugello”

“It was a real shame again. I was so calm at the beginning, trying to not make a mistake like at Jerez. I had a great start and when (Joe) Roberts passed me, I passed him back. At the beginning there were some wet patches. I went just a little bit wide and touched one wet part with the front and lost it so soon. I couldn’t do anything. We have to take the positives. It’s been a fantastic weekend in all the practice sessions, be it in mixed conditions, wet conditions, or dry conditions. I had the pace to win and now I know we can be there every weekend at every track. The Aragon test was really positive and this weekend we’ve seen evidence of that. Now we have a test in Barcelona so we can continue working to arrive stronger in Mugello.”

Sam Lowes – DNF
The 30-year old enjoyed a solid start and held position in the opening laps from tenth place on the grid and then upped his pace, posting a personal best time on lap three.

But Lowes suffered a fall on the fourth lap of the race when attempting to overtake Xavi Vierge for 7th at turn 8. The Briton crashed when losing the front and was unable to restart.

The result means Lowes drops a place to fourth in the world championship with 66 points, 23 behind leader Remy Gardner.

“I’ll take the positives to come out stronger in Mugello”

“I’m really disappointed. I want to say sorry to the team and to Vierge for the accident. I was passing him, I felt OK and that the move was possible. Another rider was wide ahead of us so that meant there was no margin to go wide when overtaking. This might have made me squeeze the brake a little more so I lost the front and then my bike took him down. I’m sorry for that and to my team as we threw away a great opportunity with our speed. But I’ll take the positives to come out stronger in Mugello. It’s nice we go back there after missing it last season. It’s a track that we all enjoy and love to ride. I can’t wait to get there and put this race behind me.”