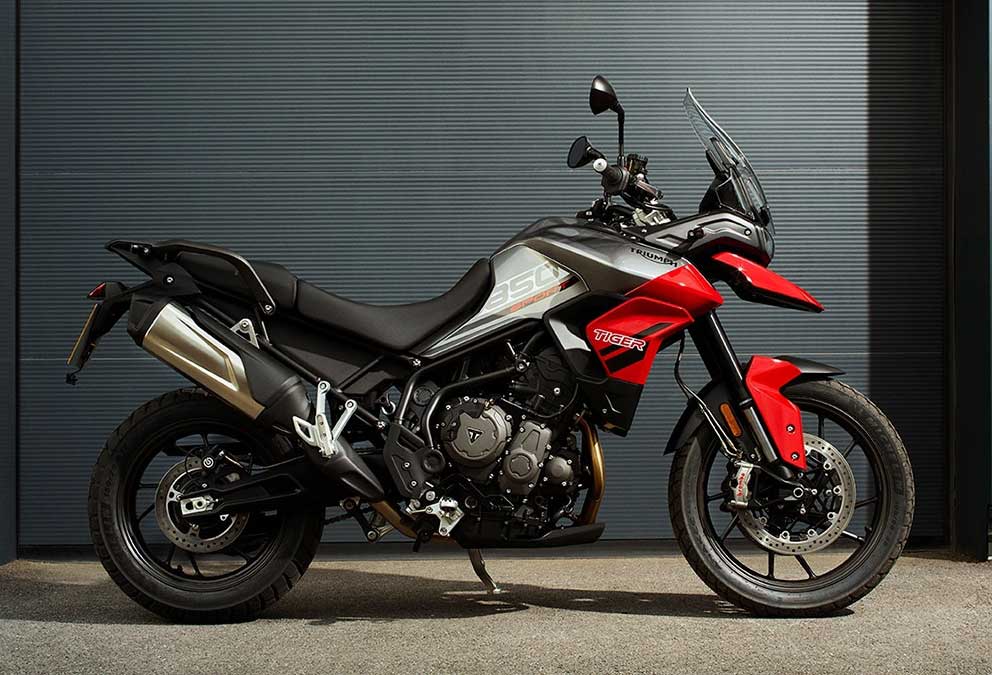 Can Triumph’s cheaper, leaner Tiger stand out in a crowded motorcycle class?

Middleweight adventure bikes are among my favorite motorcycles. They’re good at everything — comfortable, fun to ride, capable off-road and surprisingly competent on a canyon road. The middleweight Triumph Tiger is a bike I know and love, having owned a 2015 800 XCX. Now there’s a new, lower-cost Tiger 850 Sport. Is the middleweight magic still there?

The heart of the bike is its three-cylinder engine. This engine offers the torque of a twin but the increased top end of a four-cylinder, and makes its own unique set of noises. The Tiger 850 Sport’s triple is an 888-cc unit that produces 84 horsepower at 8,500 rpm and 60 pound-feet of torque at 6,500 rpm.

The engine is basically the same unit you’ll find in the more expensive Tiger 900. In the 850 Sport, the triple is detuned to make it a little more new-rider-friendly and help differentiate it from its sibling. The engine is paired with a six-speed gearbox with a chain final drive and a cable-actuated clutch. The transmission is accurate and direct, but not as slick as I’ve come to expect from other modern Triumphs. The clutch is light, though, and easy to modulate.

Off-the-line performance is reasonable if not thrilling, and I doubt that most people will notice the 9-hp deficit between the 850 Sport and the more expensive 900. The transmission’s gearing is well-suited to the triple engine’s power band. While it no longer sounds like the whistly, warbly Triumph triples of old, I still consider it and its derivatives some of the best engines in the business thanks to their smoothness, tractability and overall personality.

The Tiger 850’s Marzocchi-sourced suspension is a little more basic than I’d like in terms of adjustability, but the stock settings are comfortable and should work just fine for most riders. The 45-millimeter front fork isn’t adjustable, and the rear monoshock is adjustable for preload only. The Tiger’s braking system comes from Brembo, with some nice four-piston Stylema calipers up front gripping 320-mm rotors. The rear brake is a single-piston affair gripping a 255-mm rotor. Anti-lock brakes are standard.

The Tiger 850 Sport is a heavily road-biased adventure bike, and the lack of off-road pretensions is a good thing. Even with its large-ish 19-inch front wheel, the Sport feels agile on the road, where other, more off-road focused Tigers with 21-inch wheels can feel a little sluggish when changing direction. The suspension is also well-calibrated for road use, with the ability to smooth out rough pavement but enough stiffness to keep the bike from feeling too floaty when pushed hard.

Modern Triumphs are generally pretty well equipped in the electronics department. The Tiger 850 is a little less feature-rich than other models, but it offers plenty for its target riders. In addition to the standard two-channel ABS, you also get basic traction control and user-selectable ride modes. Regrettably, one of the ways in which Triumph opted to lower costs was to ditch the inertial measurement unit that adds lean sensitivity to the bike’s electronics. If you want that, you have to step up to the 900.

The Tiger 850 Sport doesn’t suffer much from the lack of more advanced electronics, thanks to its well-engineered chassis and fantastic ergonomics. The Tiger does an excellent job of riding the fence between being a capable adventure bike and an approachable, easy-to-ride touring motorcycle. The bike’s 31.9-inch standover height is still going to be a little tall for some, but it’s in line with other bikes in the class. It’s also relatively light for the category at 428 pounds dry.

The 850 Sport goes up against bikes like the BMW F750 GS, the KTM 890 Adventure and the Moto Guzzi V85TT. Out of these, the Triumph holds its own in terms of power with all but the KTM. It also lacks some of the BMW’s optional technical goodies, like a dynamic suspension, but that’s reflected in the Tiger’s price.

In a segment with as much competition as the middleweight adventure bike category, would I buy the Tiger 850 Sport? Honestly, no. It’s not that it’s a bad bike, it’s just that the Tiger 850 doesn’t make a compelling argument for itself. With their added electronics and other niceties, the Tiger 900 or its European competitors are likely better buys.