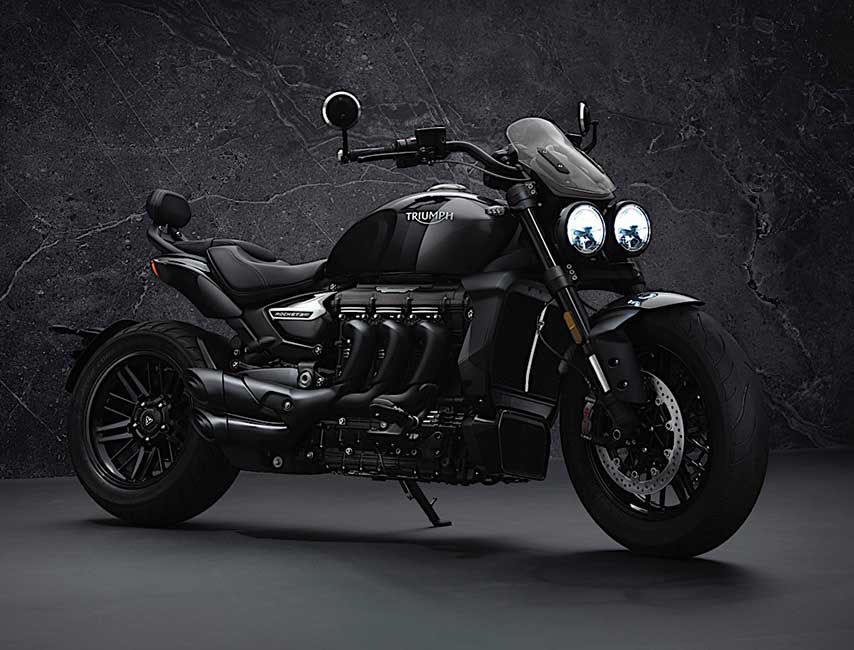 In the early months of 2019, Triumph’s Rocket 3 family got its last special edition. It was called TFC, and the 750 units included in the run quickly sold out. About two years later, the British motorcycle maker finally cooked up something else in its laboratories.

Triumph announced this week not one but two limited edition models, the Rocket 3 R Black and Rocket 3 GT Triple Black. Only 1,000 units of each will be made and sold globally, complete with a unique certificate of authenticity.

Now, technically speaking, aside from the color on the bikes and a few other modifications, the two share pretty much everything else.
Powering them both is the 2,500 cc triple engine, the “largest production motorcycle engine in the world,” as Triumph never fails to mention. It is rated in both applications at 165 hp, which a bit lower than the 180 hp developed by the TFC, and 221 Nm (163 lb-ft) of torque, which is also slightly less than the 225 Nm (166 lb-ft) of the 2019 limited edition.

But that shouldn’t matter all that much, given how the Rocket 3 remains one of the meanest bikes out there. In this particular case, it even looks a hell of a lot meaner thanks to the tons of black used on the engine, body, and pretty much everything else.

As said, differentiating the two pretty much boils down to the type of black used. The R Black uses it aggressively all over, while the GT Triple Black comes in a distinctive three-shades paint scheme.

For now, the British bike maker did not say when the dark Rocket 3s will be available, nor did it make any mention of price.

Here’s what’s new in the Limited Edition Models
by Pradeep Shah from https://www.financialexpress.com

Each unit comes with a certificate of authenticity along with a specific VIN number.

In terms of tech, the new limited editions won’t disappoint you as these get optimised cornering ABS and traction control as standard. Moreover, you get four riding modes namely Road, Rain, Sport and there is a rider-configurable mode as well. A fully coloured TFT display is on offer that is pre-enabled to accessory fit the My Triumph connectivity system. Other noteworthy features on the limited editions include all-LED lighting, hill hold control, cruise control, keyless ignition, keyless steering lock, USB charging socket and all these come as standard. Moreover, there are heated grips on offer with the Rocket 3 GT. The seat on the Triumph Rocket 3 R Black is set at 773mm whilst on the GT Triple Black, the seat height is 750mm.