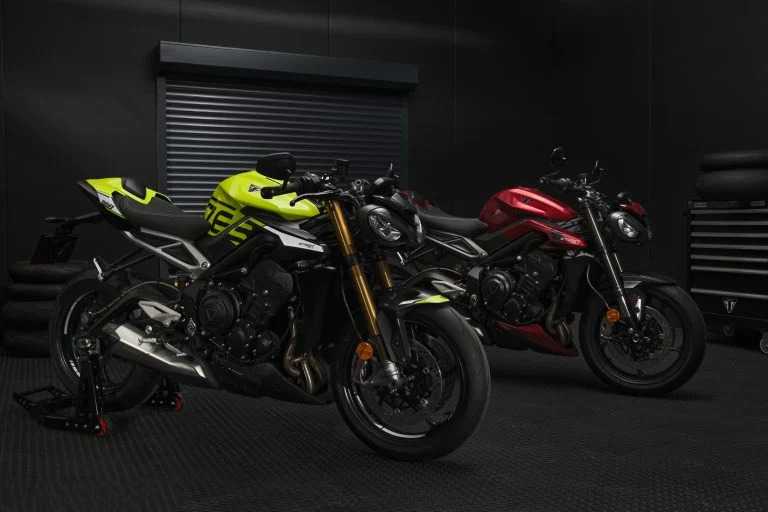 IS THIS THE REVIVAL OF BRITISH MOTORCYCLE RACING LEGACY ?

by Troy Siahaan from https://www.motorcycle.com

Unlike Honda, whose CBR600RR engine was the basis of the Moto2 category during its birth, Triumph has used the racing category to advance the 765cc three-cylinder engine shared between the race bikes and production bikes. The latest Street Triple range is the beneficiary of those advancements.

All three models will get the updated 765cc Triple, which features new pistons, connecting rods, and wrist pins (aka gudgeon pins if you’re British) on the bottom end. The combustion chambers are revised for increased cylinder pressure limits, since the compression ratio has now gone up 4.7%, from 12.65:1 to 13.25:1. New valves and higher lift camshafts round out the top end changes. The R, which is now the base model, peaks at a claimed 118 hp at 11,500 rpm, while the RS and Moto2 top out at a claimed 128 hp at 12,000 rpm. Peak torque is 59 lb-ft at 9,500 rpm, with a notable increase starting at 7,500 rpm compared to the previous model.

Triumph says all six internal gear ratios, as well as the final drive ratio, have been changed compared to the outgoing model for shorter overall gearing. What you should feel from the saddle is faster acceleration (likely at the expense of top speed) in every gear, aided by an up-and-down quickshifter on all three models. 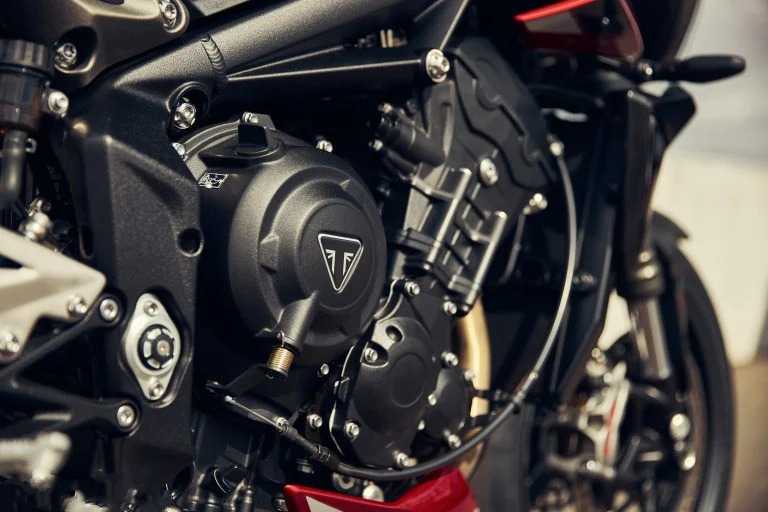 From a tech standpoint, a Continental IMU is fitted to all three models, allowing for optimized cornering ABS and a more refined traction control system (which can also be turned off). As part of the update, the riding modes (four on the R, five on the RS and Moto2) have been refined as well with what Triumph calls, “more dynamic throttle maps.” As part of these new maps, the ABS thresholds are tailored to each mode, giving the rider more or less sensitivity depending on the mode. For the RS and Moto2, the Track riding mode is equipped with a minimally invasive ABS setting.

Visually, the Street Triple range gets a new look that’s sharper and more aggressive, but still very familiar to the original Street Triple from 2007. The new 3.96-gallon fuel tank is smaller than the previous 4.6-gallon tank, but has integrated side panels with an angular design that integrates with the radiator cowls. This flow is continued with the headlight surround that also incorporates the air intake. There’s also a new color-matched bellypan for RS models (available as an option on the R).

At the back, the upswept design gives the Street Triples a nose-down, aggressive attitude which complements well with the new, freer-flowing exhaust, which itself is redesigned.

All three models have a 6,000-mile (10,000 km) service interval, two years unlimited mileage warranty, and two years of Roadside Assistance. For the US and Canada, bikes will be available starting in Spring 2023, making these technically model year 2024 motorcycles. Semantics, we know, but a point worth mentioning.