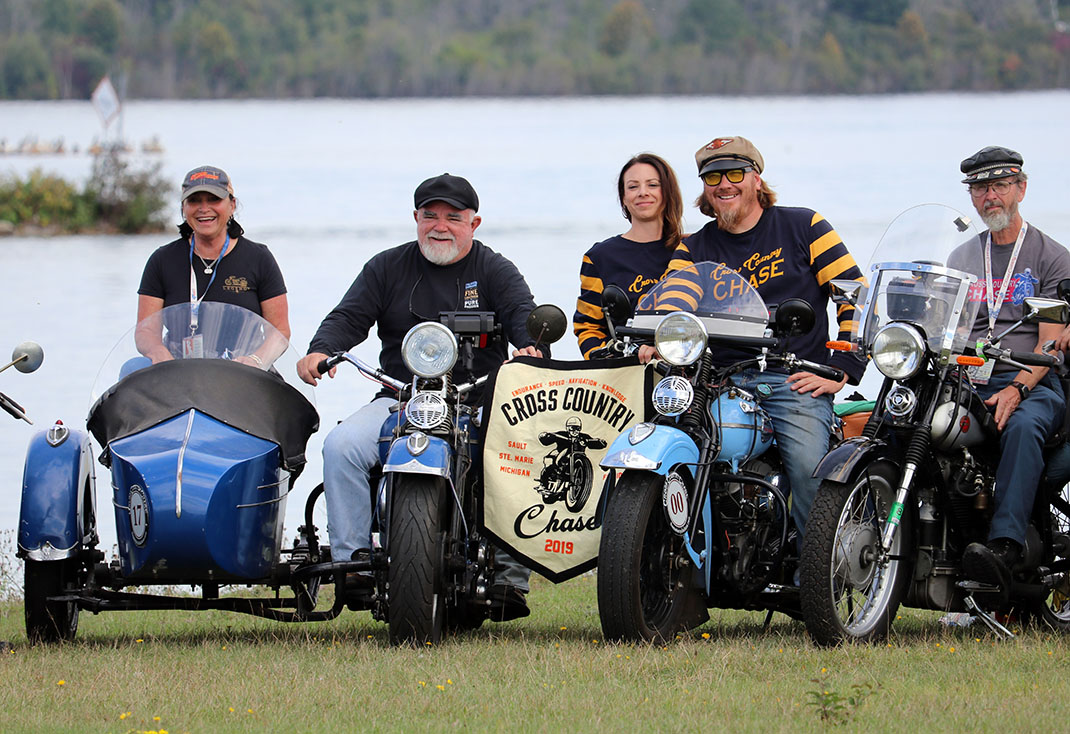 Kicking off from the Canadian border and motoring towards the Florida Keys, riders on the Chase lit out on their eight-state odyssey just as the weather witch turned the thermostat down and set to soaking the scenery for exactly half of the group’s 2,368-mile route. If you were betting that crappy weather would dampen the doings, however, you’d be dead wrong. Nothing diminished the heightened anticipation of this inaugural run as enthusiastic riders from 28 states layered on weather gear and set their sights on the warm sun and sandy beaches of Florida.

The exhilaration of the gathering for the group photo along Saint Mary’s River extended to the next day’s gloomy send off from Sault Ste. Marie in the early morning of September 6. Riders headed off into the predawn darkness along Michigan’s rain-soaked roads and, ironically, crossed the fog-enshrouded Mackinac Bridge just as 1,500 antique tractors were crossing the five-mile long Mighty Mac. Coming from the opposite direction, the annual trek of the tractors seemed perfectly timed to accent the Chase crossing. Adding an air of excitement as the motorcyclists passed the tractors, riders simultaneously checked out the tractors while eyeing the steel grate of the bridge into the frigid white-capped waters of Lake Huron below. The unrelenting drizzle kept riders soggy until a welcomed break lasting just long enough to enjoy a nice lunch hosted at the Hagerty Insurance headquarters in Traverse City, Michigan, which was followed closely by the group’s first pop quiz.

Studious riders stood with clipboards, pondering the 10-question, multiple-choice test that was based partly on motorcycle history and partly on scenery along the miles they had just ridden. This exact scenario would play out every day for the duration of the run and would be a general point of consternation for the group. Many feigned test anxiety, but some discovered that the questions served to heighten the awareness of their surroundings during the ride. Either way, testing was the hot topic that evening as pilots discussed the day and readied their machines for the next lap, which included a ride on the historic S.S. Badger.

Dawn broke as riders rolled onto the last functioning coal-fired steam ferry in the world. In service since 1953, the Badger shuttled riders and machines for 62 miles across Lake Michigan. The ship is a moving bit of nautical antiquity and even has an onboard museum, which served to keep anxious Chase riders entertained during the four-hour voyage before docking in Manitowoc, Wisconsin. The group would end their day with dinner and a bike show at the Harley-Davidson Museum in Milwaukee where rider #72, Larry Luce, barely managed to roll into the parking lot before the tire on his 1938 Velocette KSS went completely flat. Luce spent his time before dinner making repairs as a celebration played out across the museum campus. Between the rolling museum of Cross Country Chase bikes displayed outside and the Harley-Davidson exhibit inside, visitors to the museum were well steeped in historic motorcycles of all marques, though some were already starting to show exhaustion. As Stage 3 was flagged off the next morning, James Malone, #05 and Don Gilmore, #22 would both have left the run.

It would be Stage 4, the longest day of the run with 315 miles, before riders would peel off wet weather gear in exchange for the oppressive heat of the south. As the weather leapt into the triple digits, both man and machine began to wear down and one rider was sent home to recuperate from exposure to the heat as CCC staff nurse, Vicki Sanfelipo, was kept busy tending to the group’s health. By the time riders rolled into Harley-Davidson of Bowling Green, Kentucky, one rider’s saddlebag had caught fire and another’s engine shot flames as he tried to kick start his tired machine. It was easily extinguished and Matt Miller, #46, rode his 1947 H-D U off to prepare for the next day’s adventure. One rider crashed and was sent to the hospital for minor wounds, though Mike Bruso and his wife, #42, would rejoin the CCC at the finish line each night.

Scoring was a combination of mileage and testing totals, offset by certain handicaps afforded for things like age of an entry. The varying range of test scores meant the leader board was subject to change on a daily basis, though rider #99, Todd Cameron, took the lead from day one and held the position to the end. Todd’s rare 1930 BSA Sloper was the oldest British bike entered, but not the smallest. That distinction was shared by two bikes: #90, Paul Warrenfelt’s 1935 Triumph as well as #62, Scott Funk’s BSA, both with 250 cc.

There were three categories for Chase machines and each bike was inspected for compliance. Class I motorcycles had the smallest engines and, if successful in getting all the miles, were the most likely to win the race that offered legendary-status bragging rights along with a $7,500 purse. Class I consisted of motorcycles with a displacement of 500cc or less and were required to maintain 45 mph on a straight flat road. Class II were machines with a displacement of 501cc to 1000 cc that could maintain 50 mph on a straight flat road and Class III machines had a displacement of 1001 cc or more that managed 55 mph on a straight flat road. The list of marques consisted of 44 Harley-Davidsons, 15 Indians, three BSAs, three Triumphs and one each of Velocette, Nimbus, Norton and Zundapp. But by September 12, with three days left in the competition, 10 riders had dropped out. The drop list included only one Brit, Scott Funk’s BSA. Scott respectfully chose to withdraw rather than to abuse the old girl once he heard a suspicious lower end clatter.

A total of three women riders signed on for the Chase and all three, Cris Sommer-Simmons, Andrea Labarbara, and Jody Perewitz, arrived to cross the finish line at Mallory Square in Key West with solid numbers. There were three sidecar teams that also included women, two of which saw the checkered flag in Key West. Entrants included teams of brothers, brothers-in-laws and married couples and became a gathering of riders with heart who shared their passion for the sport of motorcycling in a very personal way. By the time the gaggle of riders had navigated their way across the country, most everyone was a family bound by the collective goal of seeing their friends finish the ride beside them.

Some modifications were allowed on the bikes, typically such things as upgraded headlamp, brakes, and fuel capacity. GPS was not allowed, but the addition of a speedometer/odometer in order to maintain accurate mileage was permitted since the route sheets handed out before each morning’s ride were quite complex. One missed turn would serve to knock a rider out of the scoring if he or she came in late.

The well-planned route included a heart-pounding trip over the old Wabash Cannonball Bridge on the Illinois and Indiana borders, cruising the gently rolling hills of Kentucky, a visit to Coker Tires and a train station converted into a hotel in Chattanooga, Tennessee, before they had the honor of sharing dinner with the 98-year-old owner of Harley-Davidson of Macon, Georgia. Grover Sassaman and his family invited the Chase to an elegant spaghetti dinner at the family-owned dealership and riders were delighted when the personable and cheerful Grover offered sage advice and wrenching tips on the gathered bikes. He picked out rider #61, Robert Zeolla’s, 1939 H-D EL as what he considered the most original of the Harleys in the group and posed with the bike for photographer Michael Lichter. Lichter had set up temporary studios all along the route to capture the CCC moments and the Sassamans took advantage of the opportunity to sit for a family portrait.

Riders made a stop in front of the Southernmost Point of the Continental U.S. Buoy before promoters Jason and LeeAnn Sims waved the group in with the checkered flag against the bright blue waters surrounding Key West’s Mallory Square. As a last-minute panic, rider #18, Willie Earhart, had a mechanical moment when his 1948 Harley died at the finish line with the minutes ticking down on the final clock. As the gathered crowd reached an exhilarated frenzy, Jason came close and shouted words of encouragement as Willie kicked for all he was worth in the blazing afternoon sun. Finally, after several tense minutes, the engine sputtered and came to life as the crowd screamed in elation. Everyone cheered as Willie pulled onto the pier and, with great relief, dropped his kickstand next to the rest of the overheated Chase machines. Later that evening as the sun set over fans, friends and family that gathered on the beach to watch as awards were presented, there was a collective sense of pride for a journey well done mixed with an air of melancholy as the group realized the magic of the ride had come to an end. And the obvious question was… will there be another Cross Country Chase? Stay tuned race fans… there’s more news to come!