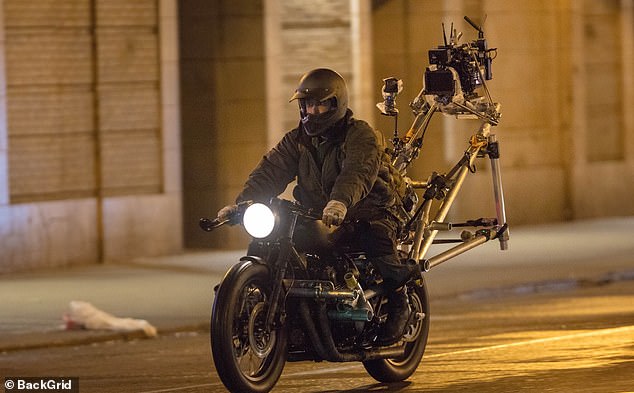 by Jon Fuge from https://movieweb.com

It looks like Colin Farrell’s take on The Penguin will be more than happy to stick his beak into the action come director Matt Reeves’ The Batman. Several new set photos show what is likely the actor’s stuntman, under heavy make-up, of course, taking flight on a motorcycle in a high-speed chase. Riding through the streets of Gotham City, it is possible that the shots are part of a similar chase scene that has been filming with the Caped Crusader and Selina Kyle AKA Catwoman.

A lot of attention has been paid to Colin Farrell’s villain, with the actor having undergone a complete transformation courtesy of the make-up department. While many have compared the look of Penguin to actor Richard Kind, there is no denying the skill that has gone into turning the handsome actor into a pretty comic-accurate version of the deformed crime boss.

In fact, so convincing is the transformation, that Farrell’s co-star Jeffrey Wright, who plays Jim Gordon in The Batman, did not even recognize him. “I’ve worked with that makeup artist before and it’s just incredible,” Wright said earlier this year. “Colin walked on to set one day and I walked right passed him [laughs] I was like ‘ok, hey dude what’s happening, where’s Colin are we going to shoot.’ It was, it’s pretty remarkable.”

The Batman wrapped production in the United Kingdom and moved to Chicago last week. Since filming started up again following a pause in production, several images from the set have appeared online, including some that show what look to be extras dressed as other DC heroes such as Superman and Wonder Woman, suggesting that The Batman might not be as insular a story as previously thought. Of course, it’s also very possible that they will just be a nice easter egg for fans to spot amid the crime fighting chaos.

The Batman has been described as a noir-driven story that will pick up with a tortured Bruce Wayne around two years into his crime-fighting career. Young Bruce has become disheartened by the lack of impact he is having on crime in Gotham, when suddenly a series of murders occur at the hands of The Riddler. Lead down a path that will reveal dark secrets about his beloved parents, Bruce is forced to confront the corruption going on in the shadows of his city, all while trying to catch The Riddler before he kills again.

Starring Robert Pattinson as the Caped Crusader, The Batman has amassed an all-star cast including the likes of Zoë Kravitz as Catwoman, Paul Dano as Riddler, Colin Farrell as Penguin, Andy Serkis as Alfred Pennyworth, John Turturro as Carmine Falcone, Peter Sarsgaard as Gil Colson and Jeffery Wright as Commissioner Gordon.

The Batman had originally been slated for release on October 1st, 2021, but due to the long pause in production and ongoing theater closures amid the global situation, this will sadly no longer be the case. Instead, The Batman will now not hit theaters until March 4, 2022. These images of The Penguin were first reported by The Daily Mail.