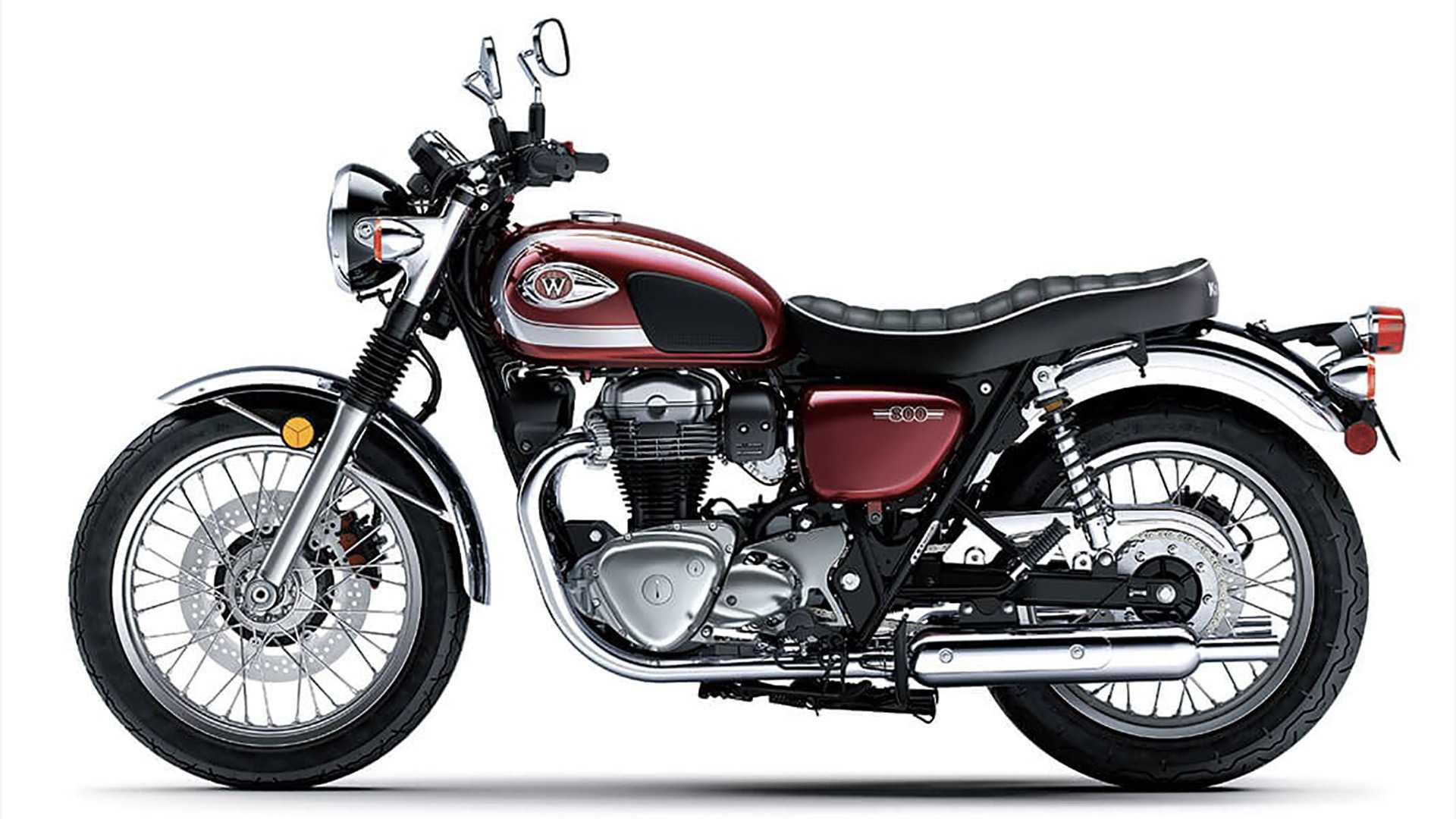 A legend brought back to life.

The 2019 show season was a good one for Kawasaki. Not only did Team Green unveil the Z H2 as well as the updated Ninja 1000 SE SX+ and 650, but it also teamed up with Bimota to create the polarizing Tesi H2 prototype. As though that wasn’t enough, the manufacturer also introduced the W800, a stripped down, entry-level version of the W800 Cafe.

I remember vividly the collective gasp we had when the model was first unveiled. The clean and simple lines were a hit among the RideApart team. I even remember being just a little upset about the U.S. and Canada getting the bike in red rather than in the gorgeous shade of green we saw in Tokyo. My disappointment didn’t last long, however, and by the time I picked one up from the Kawasaki HQ, it was completely crushed by how charming the bike actually looked. More on that later, let’s start from the beginning, shall we?

The year was 1965. While Americans and Russians were continuously outshining one another on the aerospace innovation front, Japanese and European motorcycle manufacturers had an ongoing Space Race of their own. Instead of reaching for the stars, however, the Big Four were competing for the title as the maker of the most powerful motorcycle on the market.

The early- to mid-60s were also formative years for newly-formed Kawasaki Motorcycle Co—a new competitor on the motorcycle scene born from the fusion of Kawasaki Aircraft Industry and Meguro Manufacturing Company in 1964. Thanks to the solid foundations provided by Meguro’s 30-year experience with motorcycles, it wasn’t long before Kawasaki introduced its first big displacement bike, the W1, in 1965. The 624cc parallel-twin is credited for putting Kawasaki on the map as a big bike maker and a serious competitor to Honda and Yamaha. The W1 was followed by the W2, then the W3 before the badge was ultimately dropped in 1975.

Fast-forward 24 years and Kawasaki revived the nametag just in time for the new millennium. In 1999, the W650 became Team Green’s attempt to take its share of the retro-revival cake, going up against an old-school heavyweight, the Triumph Bonneville. The model sold in North America for a meager two years before lame sales caused Kawasaki to pull the bike from the States and focus on the European and Japanese markets instead.

The reality of emissions standards soon caught up to Kawasaki and, by 2007, the manufacturer had to bid the W goodbye once again. Thankfully, the company didn’t wait another quarter of a century to revive the venerable badge. In 2011, it introduced the new and improved W800. The parallel-twin was fully overhauled a met the then current regulations. The fun lasted for another five years before the European Union came knocking once more with new regulations on emissions. This time, the turn-around was much faster and after a short year off the market, the W800 made a triumphant comeback in 2018.

Interestingly, instead of introducing an entry-level model first and following up with more elaborate version, Kawasaki did the opposite got the W ball rolling once again with the W800 Café. The entry-level W800 came the following year as a 2020 model-year. 55 years later, the W continues to roll out of the same plant that first produced the W1—talk about looping the loop.

If you like the look of the Kawasaki W800 in pictures, wait until you see it in person—I have yet to find a photo that does it justice. The W800 is a handsome bike. The proportions are elegant and Kawasaki found the right balance of chrome and black so that the bike doesn’t look like a disco ball. The manufacturer has been particularly attentive to the small details that give the model its tasteful but not tacky vintage look. Features such as the peashooter exhausts, the round turn signals, the braced fenders, and the exposed bevel-drive camshaft were borrowed from the original W, the one that started it all.

There’s no fluff or luxuries involved here—the W800 has standard ABS and that’s about as fancy as it gets. The two big dials at the center of the headstock are your analog speedometer and rpm gauge. There is a small digital display that shows mileage, trips, time, and such in the left-hand side dial and the usual panel of warning lights in the right-hand side one. There isn’t even a fuel gauge to let you monitor your progress. Just like on an older bike, you either have to do a bit of guessing or wait for the fuel warning to turn on.

As a standard, the W800 is your run of the mill, easy-to-get and to ride-on type of bike. The ergonomics are relaxed; for my 5’8” stature, the knees were at a comfortable, almost-90-degree bend and the straight handlebar is easy to reach without having to stretch the arms completely. This is as standard—and as comfortable—as this type of bike gets.

If you’re looking for a bike that stands out with a particularly spicy or spunky personality, then chances are the W800 will feel a little underwhelming. Keep in mind that this isn’t a bike meant to be flashy—it plays the understated card and it plays it well. There’s beauty in simplicity, and while the W doesn’t have the spark of, say, a Z, it does have a few good things going for it.

The engine note is my favorite part. As the Kawasaki representative put it when I picked up the bike and did the walkaround, the bike has a really rich note at low rpm. Then, around the 5,000rpm mark, the grunting engine evens out and becomes as smooth as silk. Sure enough, I started the engine and a nice, musical rumble echoed out of the peashooters. Having to hear that aria in parallel-twin at every take-off definitely made city commuting a delight.

In the city, the W behaves impeccably—not even the addition of an occasional passenger fazes it. It’s nimble and easy to whirl around in an environment where obstacles and traffic lights abound. The stopping power provided by the single discs front and back was efficient without being too mushy or aggressive—a good middle ground for a standard bike that won’t try to buck you off the saddle.

Despite weighing a healthy 496 pounds, the bike is easy to maneuver at low speed, or even to walk out of a tight spot. The steering is breezy and light in the hand, you don’t have to wrestle it into submission or convince it to make a turn.

Once you get on the highway, you get acquainted with the bike’s only real flaw. At a certain speed, I could feel the front wheel buffet, a feeling exacerbated by speed. If you wish to put a few hundred miles on the factory tires (hey: they’re “free” tires!) then adjusting your speed accordingly, below the 70-mph mark will help for a while. If you’re willing to spend the extra money, a good set of radials can make the bike virtually perfect.

The engine itself is irreproachable at any speed. Even cruising at highway speeds felt effortless and I barely even touched the fifth gear—the mill happily purred away in fourth around the 6,000rpm mark. Power is easy to manage, the gears are long (you only get five instead of the now-standard six) and the throttle output is nice and gradual. The clutch is light under the fingers and the gears are smooth as butter—just make sure you give the lever a good kick shifting from first to second, the travel between the two seems a tad long which means I often ended up in Neutral. User error, probably.

A small part of me thought the W800 would have a little more personality. Just a little something-something to give it more oomph, like with the other Kawasakis. However, I was wrong to expect that of the W because that’s not what the bike is for. It’s the celebration of a legacy rather than something revolutionary. Did I smile while riding it? I did, so in that regards, it fulfilled its mission.

The W800 is designed to be simple, straightforward, and mostly to play nice. In fact, it’s so well-mannered that I could easily recommend it as a starter bike. Think about it: it’s easy to maneuver and easy to control which also makes it easy to learn on without being overwhelmed.

Personality-wise, it might not be the right fit for me. That being said, if I could justify owning more than one bike, I would own a W for its looks alone. If you decide to buy one, be ready to have people come and ask you about it because they will. It seriously is that pretty. 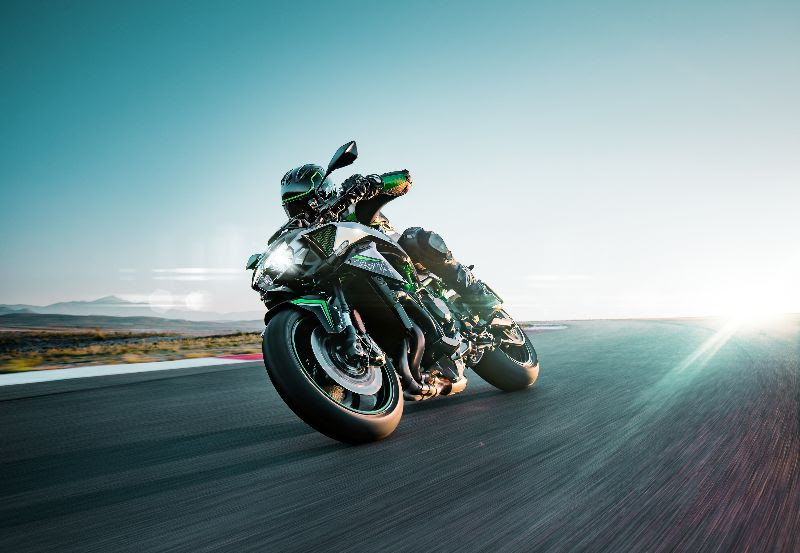 2020 W800 Motorcycle
Evolution of Japan’s Original Big Bike
The all-new Kawasaki W800 is Kawasaki’s latest addition to Kawasaki Motors Corp., U.S.A.’s retro lineup of motorcycles. It’s a true throwback to its 1960’s predecessor, the famed Kawasaki W1. For 2020, Kawasaki brings class-leading authentic styling, sound, and feel to the category of retro motorcycles. In building the W800, Kawasaki has meticulously crafted one of the most authentic retro bikes in appearance and design, paying homage to the past, all while tastefully incorporating modern technology and features. With the arrival of the W800, riders in search of a taste of history can now enjoy two flavors of W, the W800 and the W800 CAFE.

2020 Z H2 Hypernaked Motorcycle
Supernaked Just Got Supercharged
Kawasaki’s legacy of creating motorcycles that have unrivaled performance, excitement, and Sugomi™ styling continues with an all-new flagship model of the Kawasaki Z line of naked motorcycles, the 2020 Z H2. With the arrival of the hypernaked Z H2 and its powerful, balanced supercharged engine, the second chapter of Kawasaki’s Z history is about to begin and marks the beginning of a new era. Featuring a powerful and balanced supercharged engine, performance can be enjoyed across its entire rev range while still offering superb fuel efficiency. The innovative new Z H2 offers refined naked styling, a high level of handling and comfort, plus the latest technology worthy of the new Z series flagship model.

Kawasaki W800 CAFE at the OG Moto Show on March 22 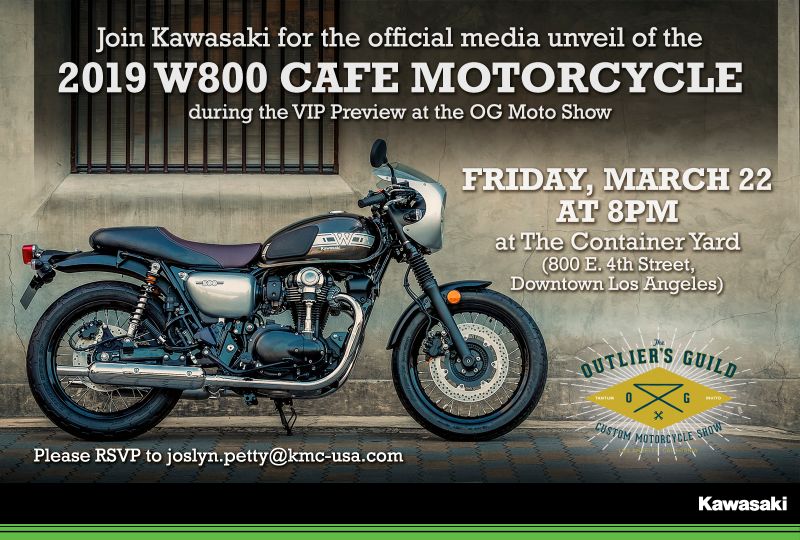 Don’t forget to come check out the new W800 CAFE at the OG Moto Show! Unveiling will happen at 8:00PM on Friday, March 22nd*.

*To be added to the media list for the show, you must RSVP to joslyn.petty@kmc-usa.com before Thursday, March 21st.

Check out The Original Icon Video below.