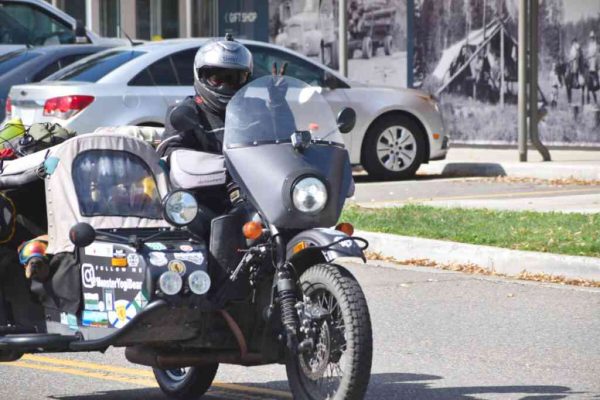 Lyna Smith recently made a stop in Quesnel with Monster Yogi Bear
by Rebecca Dyok from https://www.cloverdalereporter.com

It was no ordinary sight at the Quesnel Visitor Centre where Lyna Smith departed on her Russian-made motorcycle with a sidecar containing her four-legged friend, Monster Yogi Bear.

Smith has been traveling across Canada with her Shar Pei rescue dog on a Ural motorcycle since late April.

The pair from Port Elgin, Ont. arrived in B.C. after venturing down the Dempster Highway.

In Tuktoyaktuk, N.W.T., Smith took a swim in the Arctic Ocean with Monster Yogi Bear taking a quick lick and making a face of disgust due to the water’s saltiness.

“We went east first and my plan was to hit all three oceans,” Smith said. “We’re now headed down towards the Pacific as our third ocean.”

Smith had been planning a trip across Canada for some time and knew she couldn’t leave Monster Yogi Bear behind.

She even made him a cover for his sidecar with windows to protect him from the elements and mapped out all the pet stores along the way.

“There’s been a lot of firsts for him,” Smith said with a laugh, noting Monster Yogi Bear was even in a helicopter over Mount Robson.“He’ll be able to say he’s peed in every province and territory except Nunavut.”

Travelling with Monster Yogi Bear holds extra special meaning to Smith, who is widowed. She had told herself no more dogs when her first Shar Pei died of renal failure shortly after she lost her husband to cancer.

When a friend, however, sent her a picture of another Shar Pei from the Owen Sound Animal Shelter where her husband had gotten her first Shar Pei, Smith had a change of heart.

The Shar Pei she named Monster Yogi Bear was severely underweight and malnourished.

“They weren’t even sure he was going to survive,” Smith said, staff told her. “They said it might have long-lasting effects, and I said I don’t care. I want him.”

It took three months for Smith to fatten Monster Yogi Bear to a weight healthy enough for him to get neutered.

Since then, they have become the best of friends, typically taking the roads less traveled.

“My husband’s also the reason I decided to do this,” Smith said. “We used to travel, ride bikes and scuba dive together, so I’m like, you know what, I’m going to continue traveling…He would have loved this.”

After Quesnel Visitor Centre staff provided Smith with information on dog-friendly places and a bowl of water for Monster Yogi Bear on Monday, Aug. 15, the two hit the road to Tofino.

They planned to make stops at numerous communities and sites along the way, such as the Hat Creek Ranch, Whistler and Nanaimo.

Smith said they hope to return to Ontario in mid-October before the snow flies.

“I just like when I drive in through towns and you see people smile, and some are like you just made my day, and I’m like good,” Smith said when people see her and Monster Yogi Bear riding. “That’s what it’s all about.”

Once home, Smith will leave Monster Yogi Bear with her mom and travel solo for three more months to Australia, New Zealand and Hawaii before heading back to work at the nuclear power plant.