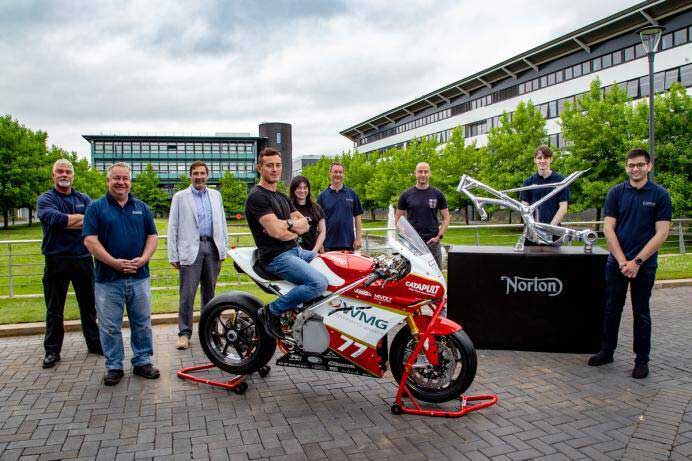 The acceleration and speed characteristics of the Norton-backed electric motorcycle roughly translate into a combustion-engine equivalent of around 900cc to 1,000cc.

Norton Motorcycle Co Ltd is supporting students at the University of Warwick in building an electric racing motorcycle capable of the TT circuit. The student team which is researching the future of electric racing motorcycles is aided by the donation of a sports bike frame by Norton Motorcycles. The unit has been fitted with an electric powertrain, with batteries and control systems designed in-house.

The group of 13 students at WMG, University of Warwick – made up of a cross-functional team from first- to final-year degree students, with the support of some EngD students – are joined by a selection of leading academics, engineers and researchers representing WMG, at the University.

On-campus research has been reinforced with input, support, mentoring and technical guidance from Norton’s own designers and engineers, further to the supply of the frame.

The research team has developed an electric motorcycle powertrain, using a high-performance sports frame as a platform. The motorcycle developed using this frame has been called the Frontier. The electric powertrain designed to work in the Norton frame is rated with a power output of 201 bhp and delivering 400 Nm of torque from a standing start.

The acceleration and speed characteristics of the electric bike in motion roughly translate into a combustion-engine equivalent of around 900cc to 1,000cc.

The electric motor draws power from an immersion-cooled battery pack that has been designed and tested by the students and is the first of its kind for application in an electric motorcycle. The battery with a capacity of 16 kWh is designed to last longer with the application of robust thermal management strategies, while also allowing for larger short-term power peaks required by a racing motorcycle.

The battery can be recharged with the common CHAdeMO connector, facilitating fast charging and allowing for a full charge of the battery in around an hour (up to 80% from empty in just 32 minutes).

Students have been able to craft a functioning electric motorcycle based on the Norton frame in just seven months. The project began in October 2020 with the donation of the frame and associated parts, with students working hard to realise their goal alongside studying for their degrees. The bike has undergone significant testing including much computer-based validation such as CFD of battery cooling, modelling around thermal management, along with physical testing of cells and modules.