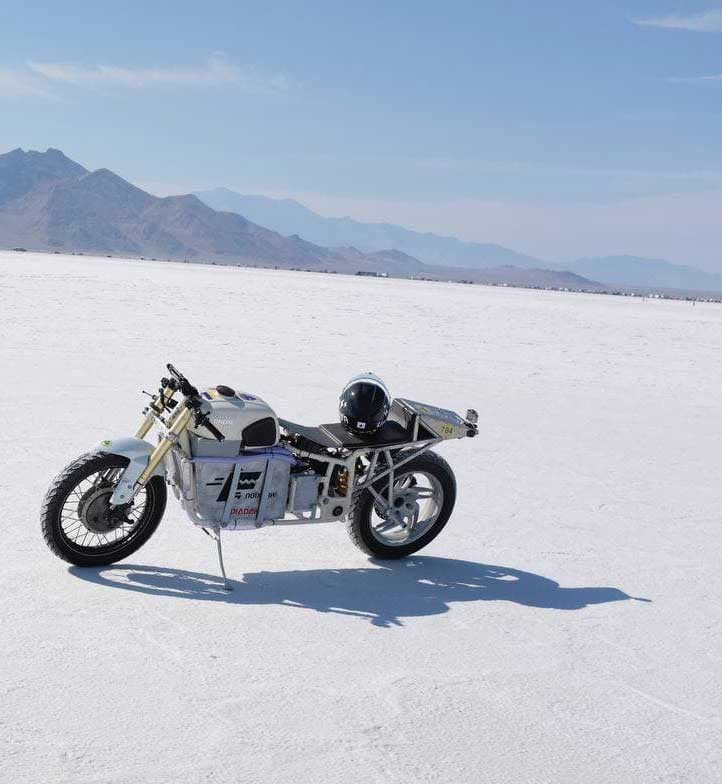 The current electric movement is extending further than anyone may have previously imagined. One company pushing electric speed limits is Delfast with their most recent speed record setting action at Bonneville Speed Week 2021.

If you haven’t heard of Delfast yet, it’s time to catch up as this team is breaking all kinds of barriers. Since the Ukrainian-based manufacturer of e-bikes set a Guinness World Record for “Longest Range” back in 2017, the company has fallen under the attention of many a circle, even providing their EVs to police forces around the world.

Their most recent achievement, and one worth the attention, is their newest speed record achievement at Bonneville. Now, they did go out there with an e-bike, but alongside said e-bike, with an electric motorcycle based on a previous Bonneville visitor, the “Dnepr Electric” motorcycle from back in 2018. This bike set the record at 104.78 mph (168.62 kph) in the “A” Omega category.

The rider of the vehicle back in 2018 was Serhii Malyk, a Ukrainian racer and multiple title champion that just so happens to love hanging out at Bonneville and kicking up salt on just about anything that’s fast.

Ever heard of Dnepr? Well, this Soviet-ran manufacturer’s history began before WWII. However, it wasn’t until 1952 that the company ran full steam ahead. With a design focused primarily on military use, these puppies are still found today, some still sporting the sidecars of their time.

What really brought fame to this brand was their attempt in copying an existing motorcycle design, the BMW R-71. Without any apparent documentation, Soviet engineers decided to copy the BMW model. With a 22 hp engine, four speeds, and shaft drive, the Soviet’s named it the M-72. 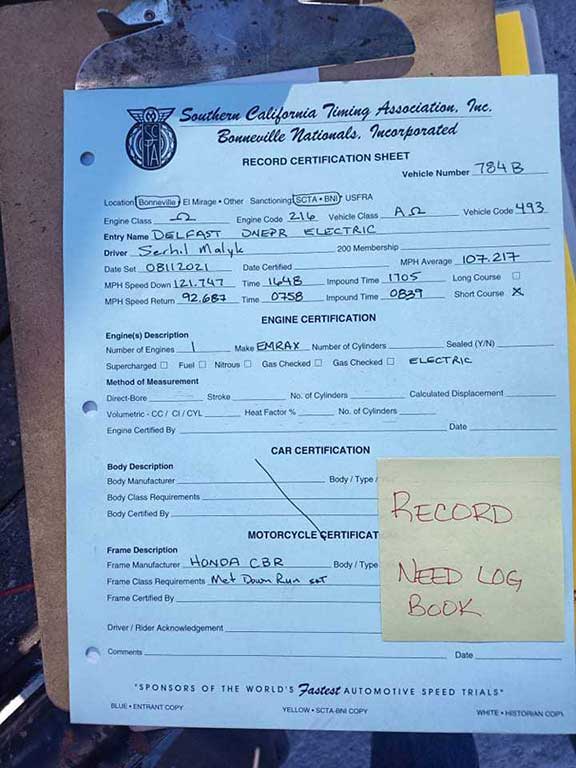 Well, a most recent acquisition of the Dnepr trademark and all intellectual property rights by Delfast has granted the Ukrainian manufacturer the ability to step into the electric motorcycle game. After all, how else are you going to “grow” a business?

With this eye on the EV revolution, Delfast has taken the previous Dnepr Electric motorcycle, and upgraded the version to include an updated controller, and most importantly, a synchro motor inclusive of permanent magnets. Overall, it’s cranking out a top 100 kW of juice, the equivalent to 134 horsepower. However, Delfast states a top 136 horsepower output in their press release.

Honestly, at this point, it doesn’t even matter. Why? Because they did it! They set a new record speed of 107.2 mph (172.52 kph), near 3 mph (4.82 kph) faster than the record. Sure, it may not seem like much, but those extra two-something miles are proof that the work and tech this team is developing is on the right track. For this ride, Serhii was the choice pilot once again. After all, he seems to have the most experience with this bike.

What does all this mean for Delfast and Dnepr? Well, for Delfast it means a new era of electric research, one that falls into an existing category of vehicles, motorcycles, allowing them to really accelerate their growth, and for Dnepr it means the brand continues to live on. Win-win if you ask me. From here, there’s only one way to go; back to Bonneville next year, with a bigger, better, stronger, faster machine. Can’t wait to see what electric motorcycle they’ll be showcasing for road use.