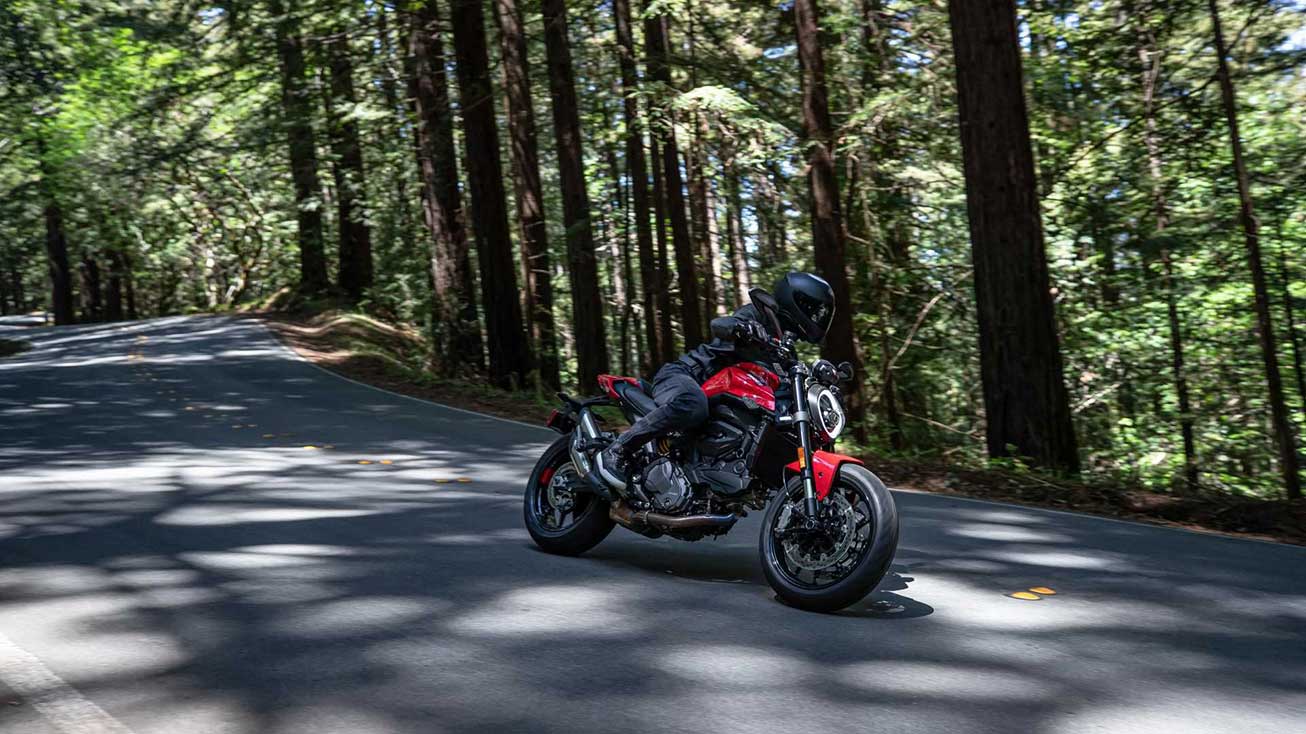 Take the edge off.
In 1992, Ducati designer Miguel Galluzzi shoehorned a 900SS engine into an 888 superbike frame. He then bolted on a 750 Supersport fork and the Ducati Monster was born. Galluzzi’s Frankenstein experiment was well-loved though, driving sales at the Bologna brand for years. The parts bin special saved Ducati, in fact, and the Monster has remained in Ducati’s stable ever since.

That hasn’t stopped the Monster from evolving through the years, though. Ducati frequently tweaked the ingredients, but the recipe remained the same: one part air-cooled L-twin, one part trellis frame. However, technology and design move on, and the model has changed with the times. By 2015, all Monster engines switched to liquid-cooling, and the latest iteration finally sheds its trellis frame—and the weight that comes with it.

That prompted traditionalists and ardent Ducatisi to click their tongues, lamenting over Ducati’s heresy. To many fans, the trellis frame was the Monster’s pièce de résistance. The quality that separated the muscular streetfighter from its “soulless” competitors. The trellis frame was the Monster’s greatest strength, but it was also its greatest weakness, imprisoning the naked bike to a bygone era as its counterparts forged ahead.

That’s no longer the case in 2021. Sure, the Monster is still “borrowing” from its counterparts by plucking the 937cc L-twin from the Supersport 950 and wedging it into a Panigale V4-inspried monocoque aluminum frame. Even the model’s 4.3-inch TFT dash sports a Panigale V4-derived interface. Despite those old habits, the question remains: is it still a Monster without the trellis frame? Did it trade in its panache for pastiche? Did it lose its character, its “soul”?

These questions loomed large when Ducati invited us to San Francisco, California, to ride the 2021 Monster. After spending a full day in the saddle of the new bike, it was clear that this is a very different beast.

Engine:
To meet Euro5 emissions standards, Ducati ditched the Monster’s 821cc Testastretta engine in favor of the proven mill found in Ducati’s Hypermotard 950 and Supersport 950. The 11-degree Testastretta configuration carries over, but Ducati bumps the capacity to 937cc for good reasons. That’s 111 good reasons, in the form of horsepower. Ducati couples that with a generous 69 lb-ft helping of torque. More than enough bark and bite for the naysayers.

The powerplant may tout a higher volume than the outgoing unit, but it also shaved off 5.7 pounds in the process. The new clutch drops three pounds alone while the cylinder heads and clutch cover account for two additional pounds of weight loss. The updated gear drum, alternator cover, and pistons and rods pitch in too, saving precious grams.

That’s the same Ducati Quick Shift (DQS) Evo 2 found on the $24,095 Multistrada V4 S, and the IMU-dependent system works just as well on this $11,895 naked bike. In fact, the DQS equipped on the Monster produces an even more satisfying exhaust note upon downshifting. Modern emissions regulations have taken the voice box of many a motorcycle, but Ducati’s auto-blipper gives the Monster a formidable growl.

Upshifts were just as visceral, but for an entirely different reason. Though the bike’s fueling was pretty fluttery below 3,500 rpm, the Monster really bared its teeth between 4,000-7,000 rpm. A series of clutchless upshifts only amplified the effect. The power delivery never bordered on frightening, though. Of course, if 111 ponies are too much pep for your step, Ducati’s three ride modes help tame the Monster’s inner animal.

Those looking for an easy-breezy experience can switch to Urban mode, which restricts output to 75 horsepower. For highway blasts, Touring mode maintains peak horsepower but prioritizes smooth acceleration. Predictively, Sport mode is the least restrictive, but that doesn’t make it less manageable than its counterparts. After a short squirt through the hilly San Francisco streets, I kept the engine in Sport mode for the rest of the day. Even in the tight and twisty confines of Route 35, the lively engine response never felt overwhelming. Thanks, primarily, to the new superbike-derived frame.

That new, low 414-pound wet weight is noticeable right off the kickstand. Fleet-footed yet planted, the Monster takes advantage of that newfound agility in the turns. Initial tip-in is effortless and side-to-side transitions are predictable and smooth. That sharp-handling quality should redeem the Monster in the eyes of Ducati fans, but focused track riders may discount the sporty naked bike for lacking fully adjustable suspension.

Speaking of, in stock form, the 43mm USD front end and preload-adjustable lean on the stiffer side. At least they did under my 160-pound frame. Heavier riders may benefit more from the spring rate, but the suspension only borders on harsh at the least favorable time—at lean. Northern California’s Skyline Boulevard is a relatively well-maintained mountain road, but a few inconveniently placed potholes unsettled the Monster’s sure-footed stance.

Of course, no suspension operates optimally when leaned over, but the sharp hit doesn’t just stop at the springs. That new, responsive aluminum chassis also relayed those shockwaves up through to the rider. Luckily, the Monster was quick to regain its composure and continued attacking corners. Aside from those rare moments of instability, though, the Monster handled everything the city and the canyons could throw at it.

Unlike the suspension, the braking system’s pedigree was never in question. Brembo M4.32 monoblock calipers bite down on twin 320mm discs up front and a dual-piston binder mates to a 245mm disc out back. A radial master cylinder is the last piece of the puzzle, and it delivers incredible feedback at the lever. Whether navigating downtown traffic or approaching a decreasing radius hairpin, the braking performance was confidence-inspiring.

Of course, losing 40 pounds would help any motorcycle shed speed quickly, but that weight loss also informed the motorcycle’s design and user experience.

Ergonomics:
Ducati went to great lengths to reduce the new Monster’s proportions. Along with losing weight, the bike also lost the visual heaviness of its trellis frame and oversized gas tank. The new dimensions deliver a compact yet comfortable riding position that’s neither too aggressive nor lax.

A 58-inch wheelbase certainly helps with handling but it also relaxes the rider triangle. Ducati pairs that compact cockpit with a handlebar that’s 2.6 inches closer to the rider and footpegs positioned .5 inches lower and 1.5 inches rearward. At 32.3 inches, the standard seat height is easy to flat foot, but those with shorter inseams can also purchase a low seat and a lowering kit that drops the perch to 30.5 inches high.

Before jumping for the accessories catalog, I recommend throwing a leg over the new Monster. Ducati narrowed the seat-to-tank area to maximize stand over comfort, and the strategy worked. However, the narrow stand-over position also introduced my knees to a few Testastretta engine cases. On the left side of the bike, the radiator and water pump plumbing can get in the way and the clutch cover is just as obtrusive on the right. It wasn’t too bothersome throughout the day, but it’s definitely worth mentioning.

Aside from those slight discomforts, the new seating position encourages day-long riding. Stretch to the bars is minimal and the narrow cutouts promote clenching the tank with one’s knees. In turn, the ergonomic position alleviated pressure on my wrists and results in a very pleasant riding experience. In the city, however, the stop-and-go traffic definitely introduced wrist fatigue.

Urban riding also revealed that the Monster had the same heat management issues as its predecessors. At speed, the Monster didn’t throw off an irksome amount of warmth, but from light to light, the new naked bike simply radiated heat. Even in Urban mode, the engine reached high temps. If you’re considering a 2021 Monster, you should also consider living near a highway. The Monster is more play than business and excessive urban environs will get it hot under the collar.

The only other tick against the new-fangled Ducati is that L-Twin’s vibration. Of course, that rumble sets the Monster apart from its parallel-twin rivals, but by 7,000 rpm, the high-frequency buzz prompted early upshifts. The vibration is nearly imperceptible at the pegs, marginally more noticeable at the bars, but it’s most present at the seat cowl. With my tailbone pressed against the seat stop, I could tell when the tachometer was approaching that 7,000-rpm threshold just by the vibration.

Electronics:
I can’t wrap up this review without calling attention to the Monster’s impressive electronic suite. With three levels of ABS cornering, eight levels of cornering traction control, four-leveled wheelie control, and launch control, Ducati’s system presents an absurd degree of customization. With that said, I’m the type of person that likes to set it and forget it. Many customers will love the number of doodads on the middleweight roadster, but others will find what they like and stick to it.

Regardless of which camp you’re in, the rider aids and engine performance options make the Monster a more malleable platform. On the other hand, flipping through the numerous menus would be easier if Ducati consolidated the split function navigation and enter buttons on the left switchgear. Also, many electronic interfaces automatically navigate back to the previous menu when the rider confirms a selection. With the Monster’s system, the user has to manually backtrack.

Even with those minor gripes, the electronics suite is clear and easy to use. That should broaden the model’s appeal as it approaches three decades on the market. It’s clear that Ducati wants to angle the new Monster toward a younger demographic, and it believes robust safety aids and rider modes help those efforts.

While all the ride modes are tractable for seasoned vets, I’d hesitate to put the Monster in a brand-new rider’s hands. The entry-level naked bike may be the perfect first Ducati, but that doesn’t make it the perfect first bike. This new Monster is well-mannered, but it hasn’t lost its claws. Rider aids should be there as a safety net, not training wheels, but the Monster would be great bike for intermediate riders to grow into over the years.

Conclusion:
So, did the Monster lose its “soul” when it lost its trellis frame? No, it didn’t. At the same time, it isn’t the same Monster. It’s more youthful. Yes, the trellis frame’s absence is felt. Without its signature visual cue, the Monster doesn’t stand out from the crowd as much, but it does stand toe-to-toe with the KTM 890 Duke, Triumph Street Triple, and Yamaha MT-09. No, the Monster didn’t lose its “soul” it just developed a playful spirit.

If you’re someone that likes the “oohs and aahs” that come with a Ducati, the new Monster may not be for you. If you want a motorcycle that’s light on its feet, attacks the corners, and just happens to be red, the new Duc should be your cup of tea. The 2021 Monster will suit a wide swath of riders just like it did 28 years ago. Those customers may be different today than they were in 1993 and the Monster will only continue to evolve (without the trellis frame) for the next three decades.