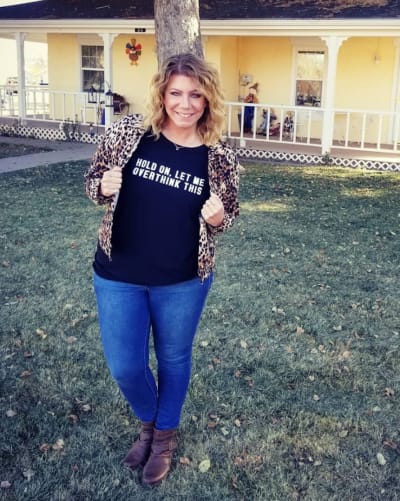 by Mona Wexler from https://www.monstersandcritics.com

Sister Wives star Meri Brown surprised her fans with a tidbit of information about herself — she rides a motorcycle!

Meri typically plays it safe when it comes to her lifestyle, so it surprised her fans to hear that she’s a biker.

The 50-year-old TLC star took to her Instagram account on Tuesday, September 14 to touch base with her fans.

Meri told her followers that she was using her day off to get some “random” things done and to “step away” from her plans.

Along with a pic of herself posing with her daughter Mariah’s dog, Mosby, Meri included one of her signature motivational captions.

It read, “Just another Tuesday morning where I get to step away from plans and do something random, like take my motorcycle in for repair…. 😁 (Don’t worry, Mosby and I drove the car for the pick up, I wouldn’t have put him on the bike, just in case you were worried lol!)”

“Working for myself, being in business for myself, making my own business decisions, creating my environment, exploring the world, finding my peace, living with joy, these are all the things I’m grateful for.”

“I’m dedicated to supporting and empowering my family, friends, team members, business partners, and anyone else who wants to own their own business and work toward their own dreams! Because dreaming is where it’s at!”

Upon reading that Meri took her motorcycle to the shop for repair, her fans immediately took to the comments section to make sure they didn’t misread her post.

“Motorcycle?! 👏” one of Meri’s followers commented.

Another one of Meri’s followers asked her, “since when do you have a motorcycle?!”

Meri revealed that she has been riding for at least 12 years when she answered, “@sophiabrionez_ since 2009 I think? Lol!”

One fan commented that they weren’t aware that Meri had a motorcycle (as most of her followers probably felt the same) and asked her, “Wow didn’t know you have a motorcycle! Can we see it ? 😍❤️”

“@robertsbev I should find an old photo!” Meri replied.

Meri found a fellow biker in the comments when a follower wrote, “What kind of bike? Tennessee Harley rider here!! 👍”

Meri, who’s sporting a shorter new hairdo, recently returned from a vacation in Cancun, Mexico where she used the time to “let go.”

Meri enjoyed time with her LuLaRoe colleagues and shared pics and video of sea turtles being released into the ocean, a highlight of her trip.

Meri will join her estranged husband Kody Brown and her sister wives Janelle, Christine, and Robyn Brown for an all-new season of Sister Wives, returning in November.

Sister Wives fans are curious to see what happens with building homes on the Brown family’s property at Coyote Pass and how they’ve managed to survive living as four separate families. Stay tuned!

Sister Wives is an American reality television series broadcast on TLC that premiered on September 26, 2010. The show documents the life of a polygamist family, which includes father Kody Brown, his four wives (Meri, Janelle, Christine and Robyn) and their 18 children.

Sister Wives returns to TLC and Discovery+ on Sunday, November 28 at 10/9c.