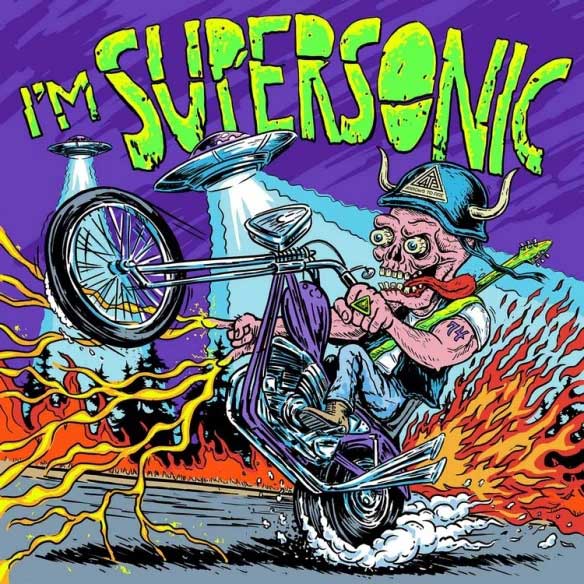 New York, NY (Top40 Charts) Austin-based indie rockers Arrows To Fire have announced their new single ‘I’m Supersonic’, hot on the trail of their pandemic-inspired single ‘A Million Miles Away’, a guitar-driven track that was inspired by struggles experienced during the current pandemic.

Driven by solid guitar power, their sound is in keeping with a tradition of ’90s-rooted alternative rock, only with a current twist.

A US-French collaboration, Arrows To Fire is Austin native John Joyo on vocals and French/American guitarist Chris Lavigne (guitarist, composer), who warns listeners about this single “Get ready for a ride and rock on”.

“Chris and I both love Harley Davidson motorcycles and both love anything that goes fast. “I’m Supersonic” is written from the perspective of a vintage 74 cubic inch Harley Davidson Shovelhead motor,” says John Joyo.

“Even though it’s old, it has guts and will kick your ass every time you ride it. This motor is psyched out of its mind to be ridden hard and can’t wait to melt your face off. We basically channeled the energy of one of the baddest motors ever built into this song. Hopefully people will feel that when they hear it!”

Joyo and Lavigne – both biotech entrepreneurs – first met in 2016 during a meeting about medical devices. They soon discovered a shared passion for alternative rock and strong desire to use music as a forum to address varied subjects – both personal and political. It didn’t take long for them to find common ground in sound and grow a path that led to releasing their 2016 debut album.

The band has since blazed its way onto the alternative rock scene with their 2018 album ‘Here We Go’ and a series of YouTube videos that have racked up nearly a million views collectively, most notably for ‘This is Here’, underlining the song’s call to action for planetary preservation. Indie Rock Cafe listed Arrows to Fire a band to watch after their 2018 South By Southwest debut. Amazon’s music curators were equally impressed, including their cover of Golden Earring’s ‘Radar Love’ in their epic Open Road Amazon Original playlist.

Their songmanship influenced by Pearl Jam, Kings of Leon, The Killers, Foo Fighters, The Presidents of the United States of America, Band of Horses, The Hives, Fu Manchu and Weezer, but Chris Lavigne notes, “It’s important to us that we don’t box ourselves in too much or stick to the same sound all of the time because we like to approach music like we approach life – be adventurous, try new things, and be open to inspiration that could come to you from anywhere or from any type of music. We like to think that comes through in the variety of sounds you’ll hear in our new music.”

‘I’m Supersonic’ will be released on February 18 and will be available across online stores such as Apple Music, and streaming platforms such as Spotify.

All songs and lyrics written, performed and recorded by John Joyo & Chris Lavigne
Recorded at the ATF World headquarters in Austin
Mixed by Tim Palmer in Austin, Texas
Mastered by James Bacon in Sheffield, UK