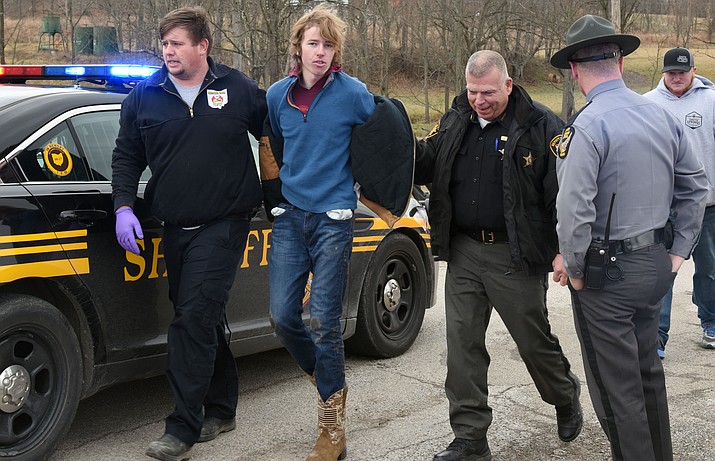 ZANESVILLE, Ohio — A 20-year-old Prescott man was sentenced to four years in prison after leading officers on a high-speed chase through two counties in Ohio last week.

According to prosecutors, some time before Dec. 11 Johansen answered an ad for a motorcycle for sale in Canton, Ohio. He asked to test drive the motorcycle and drove away with the bike.

On Dec. 11, an officer tried to stop a silver Honda motorcycle on I-70 in Cambridge, Ohio. The driver, later identified as Johansen, refused to comply and sped away, reaching speeds of up to 130 miles per hour.

After leading officers and state troopers on a high-speed chase that continued on and off the interstate and through heavy traffic, Johansen eventually lost control of the motorcycle and was taken into custody, police said.

In a statement to media, Ohio State Patrol said they suspected the cold weather affected Johansen’s ability to control the bike. According to the statement, Johansen’s first words to law enforcement were, “I’m cold.” Officers on the scene noted that Johansen was shivering and displayed symptoms of hypothermia at the time of his arrest.

According to Arizona court records, Johansen has a criminal history in Arizona. Since 2017, he has been charged with unlawful flight from pursuing law enforcement, fraudulent schemes and artifices, shoplifting, trafficking in stolen property, failure to appear in court and possession or use of drug paraphernalia. The past charges were filed in Prescott Valley and Yavapai County.

Due to a recent conviction and probation status in Arizona, Johansen agreed to waive his investigation and move to sentencing. He was sentenced to four years for failure to comply, receiving stolen property and obstructing official business.

According to a report by the Zanesville Times Recorder, Johansen apologized to the court and his family at his sentencing hearing.

“I’ve hit rock bottom and I have a long road ahead of me in incarceration,” Johansen said. “I hope to use it to my benefit.”