Daytona 200 with Triumph & Ducati plus King of the Baggers 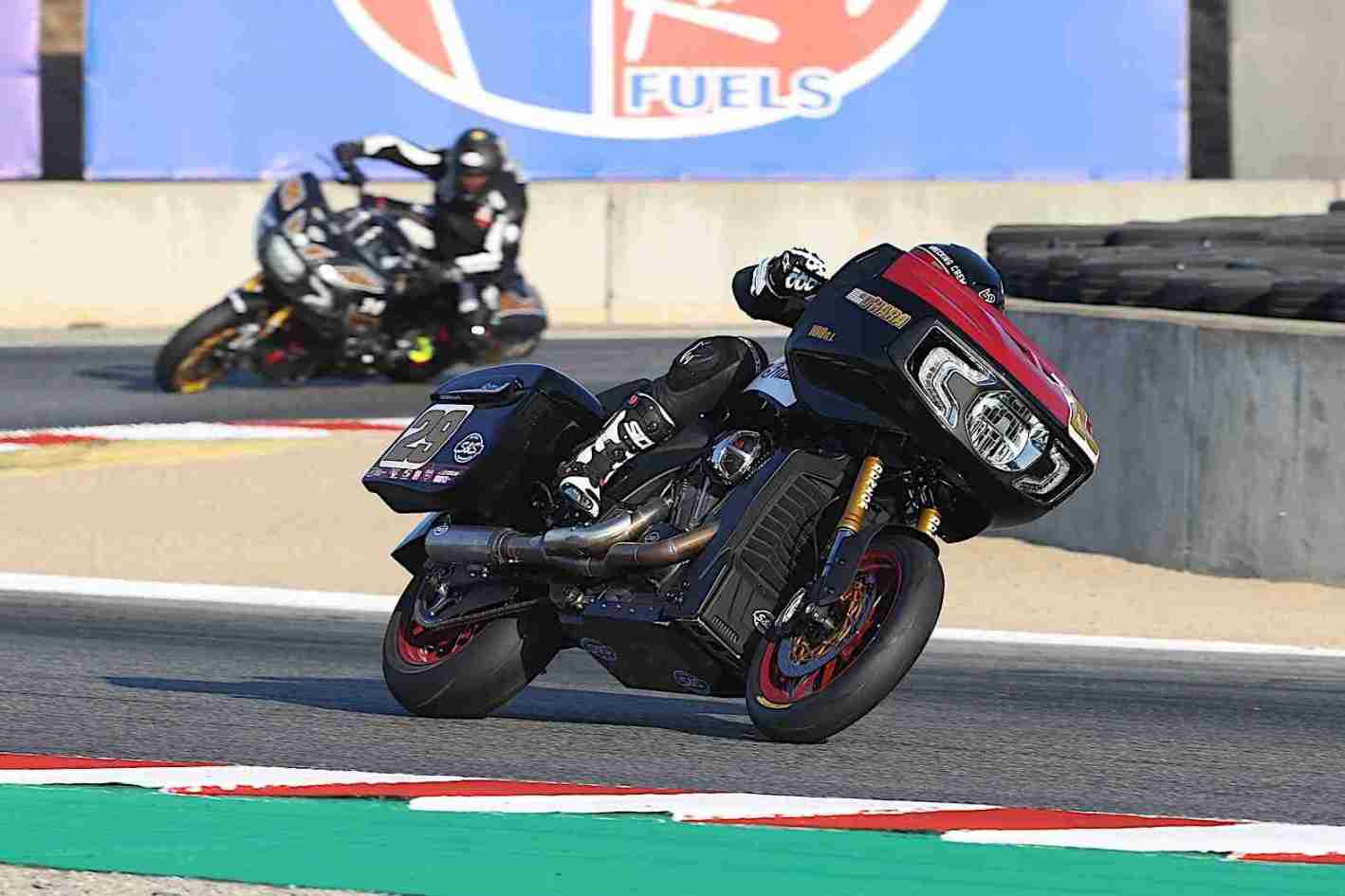 At the 80th Daytona 200 Race – King of the Baggers Goes Oval Racing Next Year, Daytona 200 to Allow Triumph and Ducati.

When one hears the word Daytona, the first thing that comes to mind is the insane racing that goes on there, especially the Daytona 500 event dedicated to cars. But the same name can easily be associated with an equally grueling endurance race for motorcycles.

They call it Daytona 200, and it has been around in some form or another ever since 1937. Next year in March, when the upcoming event is scheduled, people attending will be celebrating the 80th edition of the race. On their end, organizers will do so with new rules and bagger racing as a side dish for the first time ever.

Bagger racing on sanctioned, iconic tracks has not been around for all that long. Or maybe it has, but it only got traction after back in 2020 Harley-Davidsons and Indians went at each other’s throats in a single high-adrenaline race, called King of the Baggers, at the WeatherTech Raceway Laguna Seca.

Then, 2021 came with King of the Baggers as a three-race series (eventually won by Harley’s Kyle Wyman), and we also got the Bagger Racing League’s Drag Specialties Battle of the Baggers for the first time.

Next year in Daytona, most of the bikes that were raced this year, and hopefully, even more, will line up on the starting grid once more. It is there where the next season of King of the Baggers kicks off, marking the first time ever when such motorcycles have been raced “on the high banks of a Superspeedway with speeds expected to exceed 160 mph.”

So far, the organizers of the series, MotoAmerica, did not provide any info on how the race will shape up, so we have no idea how many tri-oval laps riders will have to do before being declared winners.

As said, this year’s three-race series winner is Kyle Wyman, who rode a Road Glide to victory, defeating last year’s single-race series winner, Indian Challenger rider Tyler O’Hara. It’s unclear at this point how the roster for the 2022 season will shape up, and the total number of races is kept under wraps as well.

The opening salvo of the King of the Baggers will, of course, not be part of the Daytona 200 main event, but there are things to discuss here as well, the most important of them all being the fact more motorcycles are now allowed in.

This is due to rule changes that “take into consideration several performance-related items that establish benchmarks for balancing a wide variety of middleweight performance machines.”

Based on the 2022 World Supersport Technical rules, the modifications should allow incredible two-wheelers like the Triumph 765, Ducati Panigale V2, and MV Agusta F3 to be fielded in the race, joining the existing Yamaha YZF-R6, Suzuki GSX-R600, and Kawasaki ZX-6R.

Daytona 200 will continue to be an open tire event, meaning each of the teams will be able to choose whatever tire manufacturer they like for the competition.

Back in March this year, the winner of the Daytona 200 was Brandon Paasch, who rode his Suzuki motorcycle to the win in 57 laps, completed in a little over two hours. The fastest lap of the race was actually the last one, and it went to Paasch in 1:49.752. That was enough to put him ahead runner-up Sean Dylan Kelly and his Kawasaki by just 0.30 seconds.

The 2021 Daytona 200 takes place on the weekend of March 10-12. The event is not part of the MotoAmerica Supersport Championship, meaning riders from around the world can take part.

At the time of writing, there is no info on the price for tickets or available packages.

16 SEPTEMBER 2021
MotoAmerica, home of AMA Superbike and North America’s premier motorcycle road racing series, is thrilled to announce that it will partner with Daytona International Speedway to host one of the world’s most prestigious races – the DAYTONA 200 – during the weekend of March 10-12, 2022, in Daytona Beach, Florida.

The 2022 DAYTONA 200, set for the green flag on Saturday, March 12, will be the 80th running of the event that began on the Daytona Beach shoreline in 1937 before moving to the World Center of Racing in 1961.

The DAYTONA 200 will feature new rules based off the proposed 2022 World Supersport Technical rules, which take into consideration several performance related items that establish benchmarks for balancing a wide variety of middleweight performance machines. These new rules open the door to motorcycles such as the Triumph 765, Ducati Panigale V2, MV Agusta F3 and others to compete alongside the current Yamaha YZF-R6, Suzuki GSX-R600 and Kawasaki ZX-6R. The DAYTONA 200 will also continue to run as an “open tire” event, allowing multiple tire manufacturers to join the competition.

The DAYTONA 200 will not be included as part of the MotoAmerica Supersport Championship, leaving the opportunity open for the best riders from around the world to compete for the minimum $175,000 in purse and contingency that will be offered.

“The DAYTONA 200 is known worldwide to be one of the most exciting motorcycle races in the world,” said MotoAmerica President Wayne Rainey, who won the DAYTONA 200 in 1987. “We are proud to work with Daytona International Speedway, the AMA and FIM North America organizations to continue to enhance the prominence of the DAYTONA 200. With the new DAYTONA 200 rules in place, we are hopeful that this will open the door to more manufacturers and teams joining us in March. It’ll be a great way to start off the 2022 season. And, wow, Baggers on the high banks! What a spectacle that will be. Obviously, this is MotoAmerica’s first trip to Daytona, and it’s my first trip back to the Speedway since 2008. I’m looking forward to what is going to be a really cool weekend.”

“The tradition of the DAYTONA 200 is unprecedented, and we are thrilled to work with such a reputable group in MotoAmerica to continue the tradition,” said Daytona International Speedway President Frank Kelleher. “Racing two-wheel style has been a staple in Daytona for many years, first on the beach before moving to Bill France Sr.’s incredible creation of the 31-degree banking of Daytona International Speedway and Infield Road Course. There’s nothing like the excitement that the DAYTONA 200 provides, including close finishes that have become the norm.”

“The AMA is pleased that the DAYTONA 200 will now be run and managed by our AMA/FIM North America partner MotoAmerica for 2022,” said AMA President and CEO, and FIM North America President, Rob Dingman. “This has been one of our goals since 2015 when we established our partnership with MotoAmerica and facilitated the return of professional road racing sanctioning rights to the AMA.”

Earlier this year, Brandon Paasch, at only 19 years old, used an old, veteran move common to Daytona, to capture the 2021 DAYTONA 200 in breathtaking fashion. After running second for most of the last portion of the race, Paasch, utilizing the draft, reeled in leader Sean Dylan Kelly and calculated a perfect slingshot move at the entrance of the tri-oval as the duo came to the checkered flag, winning by just .031 of a second, and taking home the traditional Rolex Cosmograph Daytona watch.

The iconic Daytona International Speedway will be the site of a host of motorsports events in 2022, beginning with the Rolex 24 in January, the DAYTONA 500 and Speedweeks Presented by AdventHealth in February, along with the 81st Annual Bike Week At DAYTONA in March, featuring the Monster Energy AMA Supercross and DAYTONA 200.

Fans can stay connected with Daytona International Speedway on Twitter, Facebook and Instagram for the latest speedway news. For information on all events, visit www.daytonainternationalspeedway.com or call 1-800-PITSHOP.