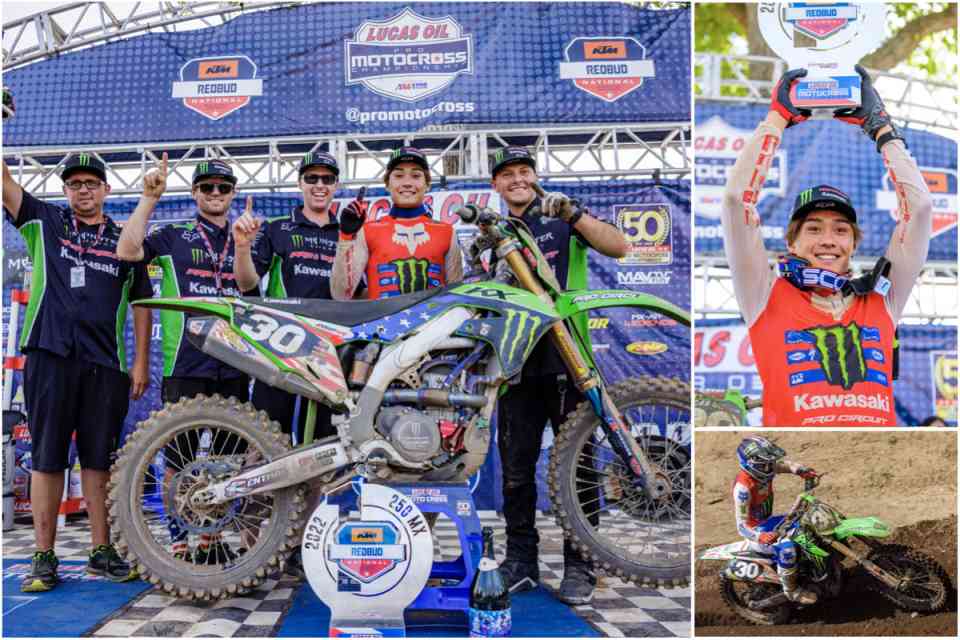 The Monster Energy/Pro Circuit/Kawasaki team quickly set the tone for the day as all three riders charged through the opening qualification sessions. Shimoda was clearly in tune with both track and machine as he logged the fastest lap (2:03.742) of the 250 Class to claim his first pole qualification. Meanwhile, Hammaker ranked ninth with a 2:06.226 and DiFrancesco showed his readiness to compete with the Pro Motocross elite by qualifying 11th (2:06.297).

At the start of 250 Moto 1, the rising Team Green star DiFrancesco was narrowly edged out for the holeshot with both of his teammates close in flank. A push of the front end in Turn 2, however, placed DiFrancesco on the ground and shuffled him to the bottom of the running order; the young rider had his work cut out for him in the race ahead. Meanwhile, Shimoda and Hammaker established themselves inside the top five with decisive moves on the opening lap. Shimoda raised the intensity to a fever pitch as he swiftly became the driving force in a three-way battle for the lead position. The No.30 KX™250 rider kept his main championship rivals under heavy pressure for the lion’s share of the race until he finally took command of the top spot with six laps remaining. Shimoda held true to form by maintaining his pace through the finish to claim his first moto win with more than a 20-second margin over second place. Hammaker logged consistent laps to hold onto a fifth-place finish while DiFrancesco turned heads with an impressive race from 32nd on the opening lap to 14th at the checkered flag.

The second 250 Class moto hosted green at the front again when DiFrancesco grabbed his first Pro Motocross holeshot in just his second start. A quick pass by Hammaker in the opening section of Lap 1 allowed the No.47 rider to take control of the lead from DiFrancesco before he lost traction accelerating out of Turn 4 and crashed. Further back, Shimoda found himself in 25th at the end of the first lap after a non-optimal start was worsened by a collision with another rider. DiFrancesco persisted with his sights on the leaders as the rookie held his own in the top five for more than half the race. While DiFrancesco gained vital experience at the front of the field, the crowd’s attention turned to Shimoda who was racing his way back into overall contention. The roars of the crowd followed Shimoda around the track while he passed multiple riders per lap, using creative line selection and relentlessly carrying his momentum through the pack. Despite his early race adversity, Shimoda clawed his way up to a heroic third place position to secure his first career overall win and made his mark in the history books as the first Japanese rider to grace the top step of the AMA Pro Motocross podium. After visiting the mechanic’s area to regroup from his crash, Hammaker made his way to 15th to salvage 11th overall (5-15) on the day and DiFrancesco finished the race with a respectable 12th place finish for 13th overall (14-12). 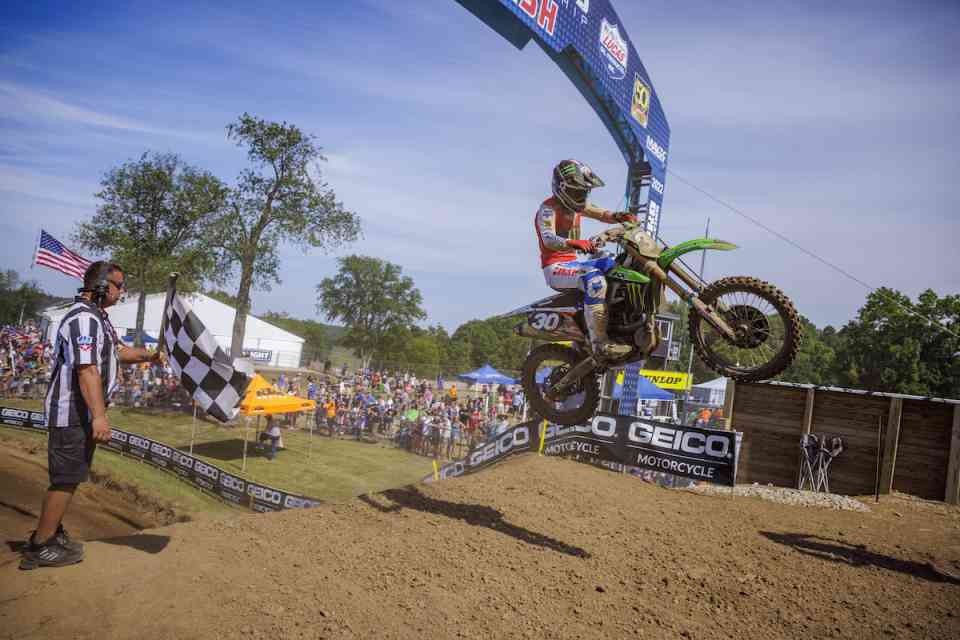 “In the first moto, I started up front and had a fast pace going as I pressured the Lawrence brothers for the top-two positions. I was able to make a good pass into the lead and finished strong for the moto win. In Moto 2, my start wasn’t great and then I got caught up with some riders on the first lap which put me outside the top 20. I pushed hard the whole race to fight my way to third and earned my first overall victory. I had to race really hard in both motos, and it paid off for a great day.”
– Jo Shimoda

“I made it a little tougher on myself than I needed to today but, my starts are improving and I just need to clean up a few things. In Moto 1, I had a pretty steady race all the way through to come away with a fifth but, I was looking to better that and get into the podium battle in Moto 2. Unfortunately, I lost traction at the bottom of the hill and fell just after passing into the lead so, I had to race forward from the back of the pack. It’s frustrating of course but, I will keep putting myself up there in the mix and keep improving to iron out those small mistakes.”
– Seth Hammaker

“I had a great start in the first moto but, a crash in the second corner put me way down the running order. I raced forward and made a bunch of passes to finish 14th. In Moto 2, I grabbed the holeshot which felt awesome, and I did my best to keep pace with the leaders for as long as I could. My goal for the day was to do exactly what I did for the first half of that second moto, I matched the speed of the guys at the front for as long as I could before getting tight and settling back a bit. I’m looking forward to Millville where I’ll try my best to stay up there even longer.”
– Ryder DiFrancesco 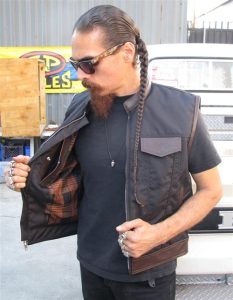 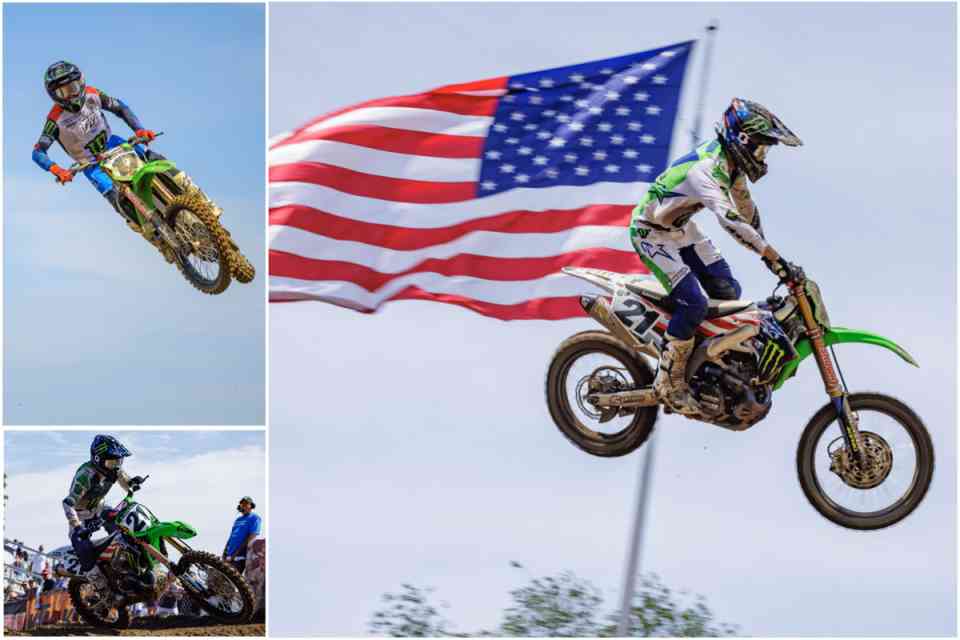 The RedBud National featured the second reverse moto schedule of the season which meant a smoother track and higher speeds for the 450 Class qualifying sessions as they took to the course first. Never shying away from a high speeds, the Monster Energy Kawasaki duo of Anderson and Savatgy put the power of their KX™450SR machines on display by qualifying at the front in both timed sessions. When qualification concluded, Anderson had the second-fastest lap of the morning (2:03.505) and Savatgy was hot on his tail with the third-best lap time (2:03.698).

In 450 Class Moto 1, Savatgy was narrowly beaten out for the holeshot as he jockeyed for position with several of the top championship contenders. At the completion of Lap 1, Savatgy had taken a firm hold on second place with his pace in lockstep with the race leader. Unfortunately, Anderson was collected in a first turn crash and the No.21 KX™450SR rider crossed the green flag in 31st position. As the race progressed, Savatgy fortified his spot at the front by extending a gap over the riders behind and keeping in close tow of the rider out front. Unphased by the pressure of battling among several premier class champions while maintaining a smooth intensity to his speed, Savatgy held onto second place until Lap 14 when he was overtaken. A brief battle ensued when Savatgy launched himself back into second by skying out Larocco’s Leap but, he soon settled into third for the final laps of the moto. Savatgy crossed the checkered in third to secure his first 450 Class podium result and proved his recent progress with the Monster Energy Kawasaki team is affirming his place among the best in the world. Not to be overshadowed, Anderson thrilled fans as he charged through the field for the full 30-minute plus two lap race, passing over 25 riders, to secure eighth place at the finish.

The second 450 Class moto saw both Monster Energy Kawasaki KX™450SR riders emerge from Turn 1 inside the top-10. Anderson looked to fight toward a podium position as he moved forward from fifth on the opening lap to take control of fourth on Lap 4. A brief crash in the turn prior to the mechanic’s area, however, set the New Mexican back to eighth place and forced him to race his way up the running order again. A benefactor of Anderson’s crash, Savatgy moved into contention for the overall podium as he pressed forward to sixth by Lap 5. Savatgy continued to push himself forward until a swap through the sand turn after Larocco’s Leap caused him to crash and drop to ninth place on Lap 6. Anderson quickly found his form again as he maneuvered through the competition to reach fifth place by the checkered flag; his 7-5 moto scores earned him fourth overall. Savatgy finished out Moto 2 in ninth to earn sixth overall (3-9) and, more importantly, proved himself as a legitimate podium contender.

“Minor crashes in each moto cost me valuable time and positions early so, I felt like I was playing catch up all day. My speed was solid, and the bike felt great but, a couple of miscues are all it takes to put the podium out of reach. Overall, I made a lot of passes out there and managed to salvage a fourth overall so, we’ll just keep moving forward with the goal of getting another win here soon.”
– Jason Anderson

“It’s been almost four years since the last time I was on the podium and there have been plenty of highs and lows along the way. Finally getting myself back up on the box in the first moto felt amazing. Thank you to the Monster Energy Kawasaki team for this opportunity to be racing and improving each weekend. I was set back a bit overall by the crash in Moto 2 but, we took major steps in the right direction today and look forward to more progress ahead.”
– Joey Savatgy