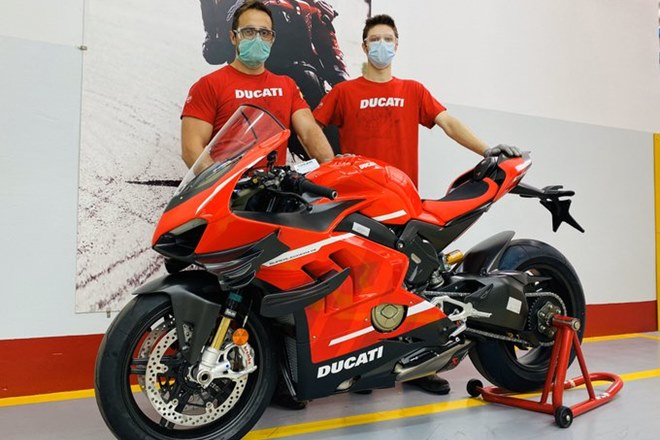 The Ducati Panigale V4 Superleggera, which is no less than an engineering marvel is all set to hit the production lines. Here is what makes it so much special!

More than stunning looks and breathtaking visuals, Ducatis are about blistering performance! The company keeps coming out with new and better products and believes in answering the prayers of the speed enthusiasts and high-end bike lovers. Now, very recently, Ducati CEO Claudio Domenicali has confirmed that the Panigale V4 Superleggera that happens to be company’s most powerful production motorcycle is all set to hit the production line. He also confirmed that the last pre-production model of the upcoming Panigale V4 Superleggera will be reaching Nardo soon to go through the final quality check. Now digging into the details of the Ducati Panigale V4 Superleggera, the bike gets power from a 998cc, Desmosedici Stradale V4 engine that is good for producing a staggering 224hp of power along with a peak torque of 115Nm. When fitted with an Akrapovic exhaust (track only), the power output sees a rise to 234hp.

The bike has an incredible power to weight ratio, 1.41bhp/kg to be precise, which is all thanks to its low dry weight of just 152 kg. The upcoming Ducati Panigale V4 Superleggera also gets MotoGP derived winglets that have been integrated into the fairing and these help in providing a downforce of 50kg at speeds of around 270kmph. Being an ultra-exclusive model, only 500 units of the Ducati Panigale V4 Superleggera will be made and a few of those should make their way to India as well.

Coming to the pricing, well, the Panigale V4 Superleggera clearly is not everyone’s cup of tea due to its astonishing price tag. In order to be precise, this one costs USD 100,000 in the global markets that translates into Rs 71 lakh as per the Indian currency, considering the current exchange rates. So, while a few lucky ones among you can still think of buying this engineering marvel, I think that a bedroom poster of the Panigale V4 Superleggera should be good enough for me as I can clearly hear the voice of my bank balance that is laughing shamelessly at me!