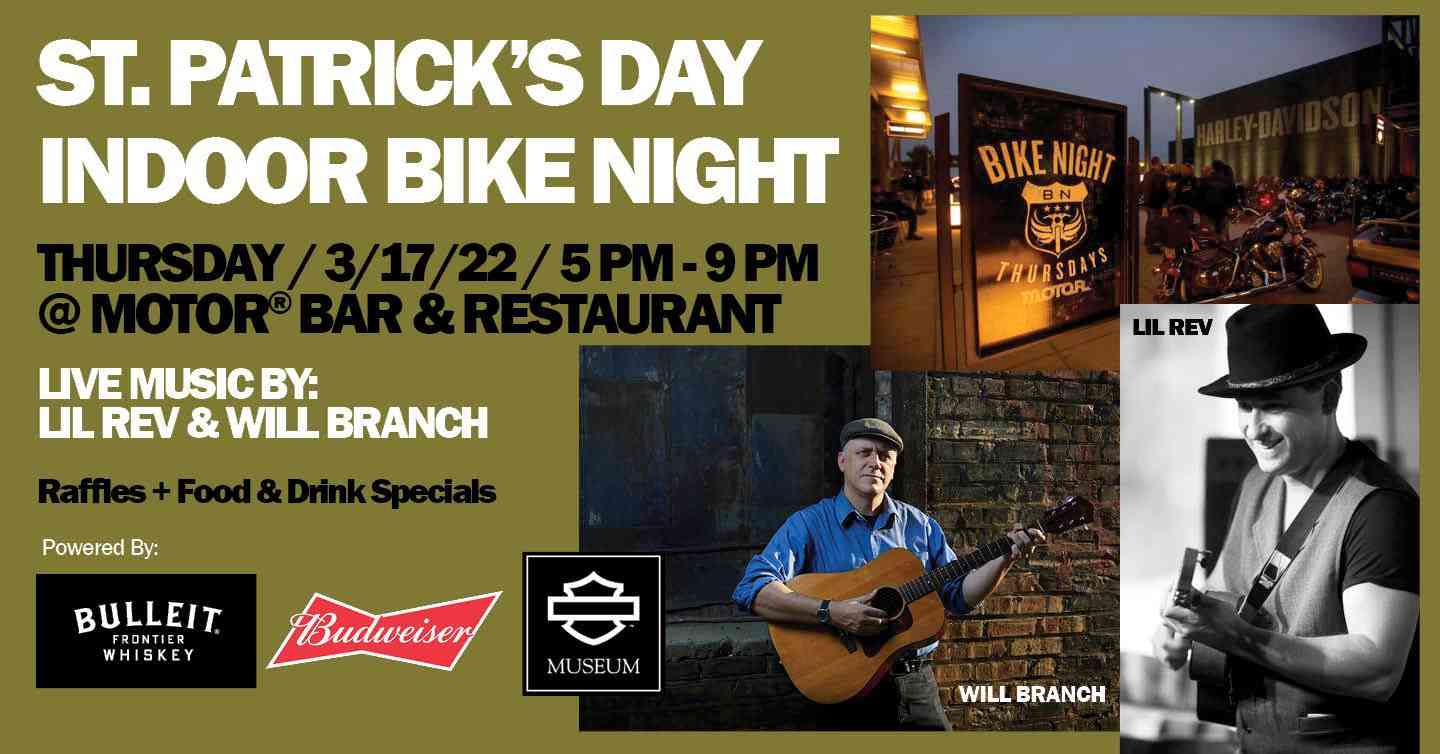 Kickstart March with the official Mama Tried Pre-Party and keep the throttle open.

MILWAUKEE, USA (March 3, 2022) – It’s time again for Mama Tried, the indoor invitational motorcycle show that connects motorcycles and builders to fans and riders alike. And the Harley-Davidson Museum is doing its part to keep the fire stoked all winter long by hosting the Mama Tried Official Pre-Party, powered by Budweiser® & Bulleit® Bourbon, which will be taking over MOTOR® Bar and Restaurant on Thursday, March 3. The Boonie Bike World Series will light up the track and your favorite Flat Out Friday racers and Mama Tried Motorcycle Show builders will be a part of the fun. Plus, 88.9 Radio Milwaukee’s Marcus Doucette will be spinning the tunes that will have the crowd shaking their money makers.

And faith and begorra, the fun won’t stop when Mama Tried packs it up. Mark your calendars for Thursday, March 17 when the shenanigans reappear at MOTOR® Bar and Restaurant for the St. Patrick’s Day Indoor Bike Night. With live music from the Lil Rev & Will Branch duo, featuring some traditional Irish and Celtic music plus a mix of blues, bluegrass, roots and rock, everyone will be enjoying the luck of the Irish.

Finally, with Lent underway, MOTOR® Bar and Restaurant has you covered when it comes to your fish fry fix. The famous all-you-can-eat fish fry has a new friend on the menu. On Wednesdays and Fridays throughout Lent, the AYCE fry and the Atlantic cod sandwich – complete with Muenster cheese, jicama slaw, and pickles on a brioche bun with tartar sauce – will be off the hook.

MOTOR is also teaming up with Feeding America Eastern Wisconsin for the first ever Friday Fish Fry Challenge, taking place Friday, March 4. See below for more information on how to participate.

Annual Pass
Looking for interesting things to do and ways to fully enjoy our programs and exhibits? The Harley-Davidson Museum’s new Annual Pass offers individual, family and VIP levels to fit your lifestyle. Just some of the perks of the new Annual Pass include: virtual access to the H-D Museum with various Harley history topics covered in our Virtual Gallery Talk series, admission discounts, free admission for children under age 18, merchandise discounts at The Shop, dining discounts at MOTOR® Bar & Restaurant and more. Visit H-D Museum.com for details and other terms and conditions.

Engineering Merit Badge (Saturdays at 11 a.m. and 1:30 p.m.)
All scouts are welcome to come earn their Engineering Merit Badge at the Harley-Davidson Museum! This experience will be partially facilitated as scouts explore the history of Harley-Davidson as well as the engineering of motorcycles as they complete the nine merit badge requirements. Advance registration is required. Program registration closes one week prior to the scheduled program date. Ticket includes: downloadable activity booklet used for the program, partially facilitated program, blue card signed by the facilitator (one blue card per scout registration) and an exclusive H-D Museum™ patch.

Scout Virtual Engineering Merit Badge (Saturdays at 8:30 a.m. and Tuesdays at 6:30 p.m.)
This new 90-minute online program is open to scouts from all over the country. Our program facilitator will guide the troops and explore the role an engineer plays while creating a Harley-Davidson® Motorcycle. Nine requirements for the Engineering Merit Badge will be discussed during this virtual, interactive program. Advance registration is required. Program Fee: $20 per Scout, which includes an activity booklet used during the program and a special H-D® patch upon completion of the program.

MUST-SEE EXHIBITS AND INSTALLATIONS
Keith Brammer (Die Kreuzen) leather jacket (on display now)
Perhaps no other genre of music is so closely associated with the classic black leather jacket than punk rock. Keith Brammer, of Milwaukee’s hardcore punk band Die Kreuzen, has graciously lent his well-worn leather to the H-D Museum. The jacket was purchased in New York City in the 1980s and was a constant companion for Brammer throughout his touring days. Check out the Custom Culture gallery to view this piece of Milwaukee music history.

Inspiration and Recovery: Wounded Veteran Climbs the Seven Summits (on display now)
In September 2009, Specialist Benjamin Breckheimer, a Cavalry Scout with the U.S. Army 2nd Stryker Brigade, 2nd Infantry Division, was severely wounded during a tour in Afghanistan. His rehabilitation was difficult as he endured numerous surgeries. During this same time, the Harley-Davidson Museum regularly sent care packages – including H-D Museum™ flags dotted with well wishes – to active-duty military personnel. Breckheimer took to mountaineering during his recovery and over the summer carried the H-D Museum™ flag to the summit of Denali, the highest point in North America. With that peak reached, Breckheimer became the first and only Purple Heart recipient to reach all the Seven Summits, the highest peaks on each of the seven continents. He continues to climb, and he shares his inspiring story to encourage resiliency and support the mental health of veterans and current service members.

Clubs & Competition (on display now)
In the early part of the 20th century, motorcycle culture was a homegrown phenomenon. It grew out of the passion of riders for their evolving sport. The camaraderie that developed around riding and attending competitive events led to the formation of motorcycle clubs that hosted destination rides, family picnics with motorcycle games and other riding competitions.
The newly reinstalled display case in the Clubs & Competition gallery highlights clothing from club members from primarily the 1930s and 1940s. The clothing selections on view include full dress uniforms, shirts, sweaters, jackets and caps, customized by the owners with their club’s name and logo, and pins or patches indicating membership in the American Motorcyclist Association. The H-D Archives collection includes Motorclothes® apparel sold in H-D® product catalogs but also non-H-D produced clothing items that have been proudly customized by riders.

Alfonso Sotomayor’s 1957 Model FL (on display now)
The Harley-Davidson Museum is proud to announce its collection has recently grown with the addition of a 1957 Model FL that was ridden by famed Mexican stunt rider and racer Alfonso Sotomayor Canales.
Harley-Davidson’s history in Mexico dates back to at least 1913. In the 1920s, the brand was more frequently spotted throughout Mexico City as the motorcycles proved popular with the local traffic police who would also perform stunts with their Harley-Davidson® bikes. After racing from the 1930s into the 1960s, Sotomayor launched his own stunt riding career by performing the famed “Salto de la Muerte” or Jump of Death. Learn more about Sotomayor’s feats of derring-do and Harley-Davidson’s early entry into Mexico with this new display located in the Custom Culture area.

“Building a Milwaukee Icon: Harley-Davidson’s Juneau Avenue Factory” (on display now)
A recently recovered cache of architectural drawings includes plans for the original Juneau Avenue facility. The pencil drawings, along with archival photographs, demonstrate the whirlwind pace of the company’s early growth. While building an international business—going from producing just over 1,000 motorcycles in 1909 to manufacturing 27,000 motorcycles in 1920—the company’s Milwaukee factory experienced near-constant expansion. Construction through this relatively brief period created the buildings that today, a century later, are still the proud home of Harley-Davidson.
“Building a Milwaukee Icon” provides a snapshot of Harley-Davidson’s formative years and illustrates a chapter of Milwaukee history when the city was known as the “Machine Shop to the World.”

THE SHOP
The Shop at the Harley-Davidson Museum is the place to find exclusive apparel, collectibles and accessories inspired by the H-D Archives. Check out new spring items that are arriving daily!

MOTOR® BAR & RESTAURANT
In addition to the Mama Tried Pre Party and the St. Patrick’s Day Indoor Bike Night revelry, MOTOR’s March specials are cooking all month long. Whether it’s the Peppercorn Burger (8 oz. hand-packed, ground chuck patty studded with a crushed peppercorn medley, topped with sautéed onions, Swiss cheese, and a whiskey peppercorn sauce and served with fries and pickle spear for $15.95), the Bangers & Mashed (locally sourced sausages, buttery mashed potatoes with onion gravy and sweet peas for $ 15.95) or the Old Fashion Bread Pudding (brioche baked in an orange and vanilla custard with dried cherries served with brandy caramel sauce and vanilla ice cream for $8.95), MOTOR® Bar and Restaurant serves up the ideal pairings of food and fun.
MOTOR is also teaming up with Feeding America Eastern Wisconsin for the first ever Friday Fish Fry Challenge, taking place Friday, March 4. Vote for your favorite fish fry by making a donation in the name of your favorite restaurant (obviously, it’s MOTOR). One donation = One vote. The team with the most votes wins the challenge and gets named the 2022 winner on Friday Fish Fry Day’s website! To avoid dipping into the staffs’ tips, the fundraiser will take place online only. Fans can vote at http://www.FeedingAmericaWI.org/fishfry or donate to the restaurant’s specific text keyword (text FISHFRY3 to 71777 to cast a vote for MOTOR).

1903 EVENTS
Did you see the news? The H-D Museum announced plans to reshape its campus. And that includes our special-events spaces. The all-new Garage will be open later this spring, and the team at 1903 Events would love to make your event one for the ages. Contact them now to book for this year (and beyond).

SAVE THE DATES
Milwaukee Day, April 14
Inaugural Bike Night, May 5

Mama Tried Show is back! Get your Tickets now! 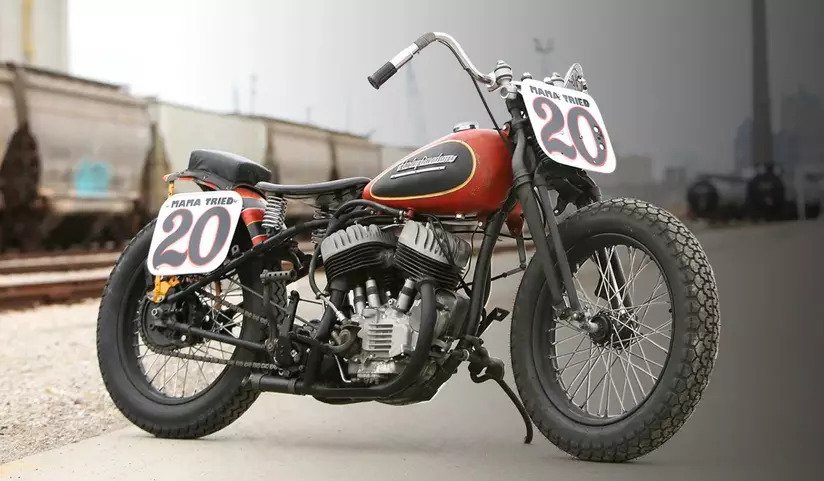 On Sale Now: Tickets for Mama Tried & Flat Out Friday!

Advance tickets are now on sale for Mama Tried and Flat Out Friday, so get on over to our site and buy your tickets now to ensure entrance to the shows!

Have a look at some bikes from over the years.