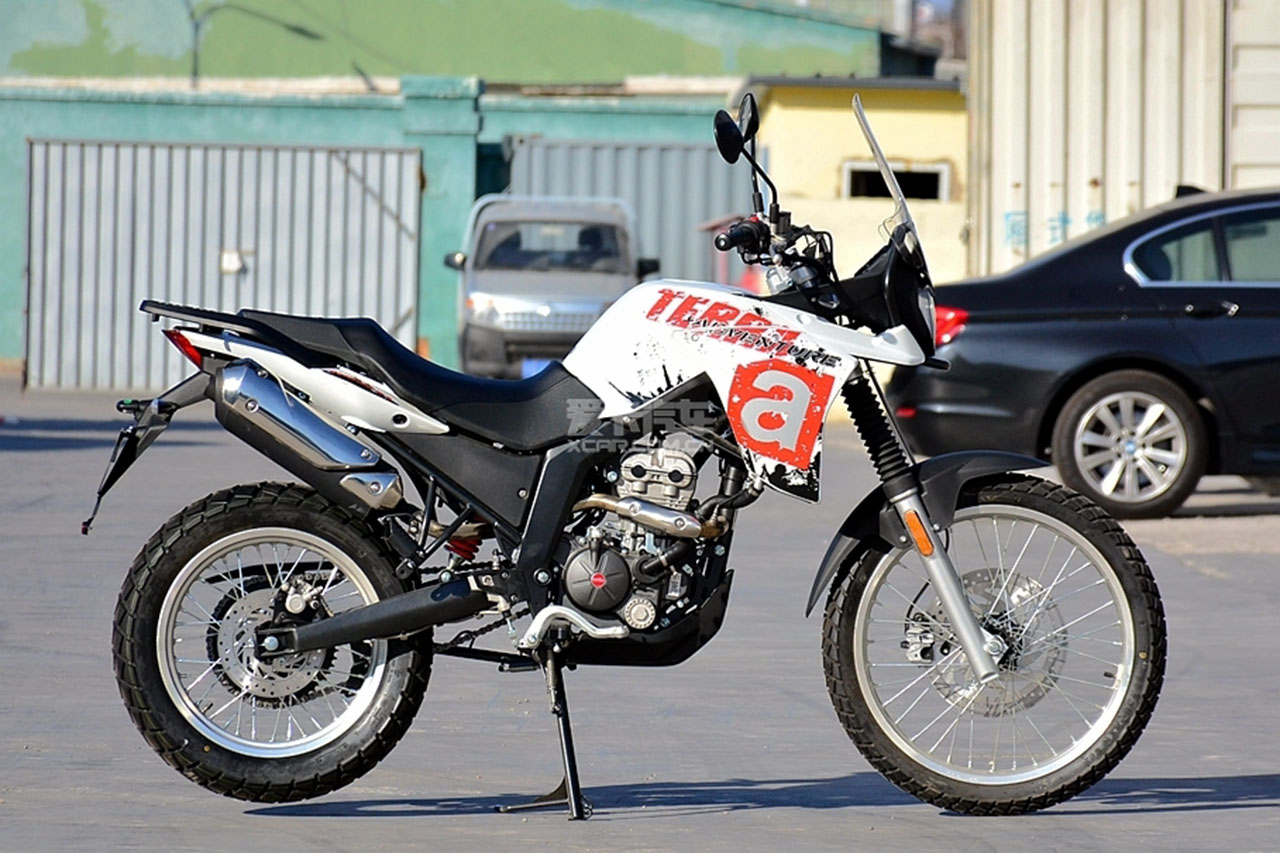 Italian two-wheeler brand, Aprilia is apparently working on a new adventure (or dual-sport) motorcycle in the 250cc category, for the Chinese market. It was recently spied at Zongshen Aprilia’s manufacturing facility in a market-ready format. Zongshen Aprilia is the Italian automaker’s Chinese counterpart.

Aprilia already sells the Terra 150 in China. The 150cc liquid-cooled single-cylinder motorcycle (which originally made its debut in a 125cc avatar) is relatively expensive and has not been able to perform well on monthly sales charts. Zongshen Aprilia aims to change this story with its new Terra 250. The motorcycle could be introduced in other Asian markets in phases but it is too early to make any conclusions.

The Aprilia Terra 250 is based on a split-cradle chassis frame with a box-section swingarm and a tubular handlebar. To aid off-roading characteristics, it gets 18-inch front and 17-inch rear spoke wheels with knobby tyres. Reports state that this is the standard version and a more capable ‘Adventure’ variant could be introduced alongside (with longer suspension travel and 21-inch wheels at the front).

At the moment, a lot of details about the motorcycle remain unknown. However, it shares its power plant with the CFMoto 250NK which could be launched in India soon. The 249.2cc liquid-cooled DOHC single-cylinder engine makes around 26bhp @ 9,000rpm and 22Nm @ 7,500rpm. This is mated to a 6-speed gearbox via a slipper clutch. The CFMoto 250NK can hit a top speed of 140km/h.

The Aprilia GPR 250, which was introduced in China last year, is also powered by the same engine. In the Aprilia Terra 250, the output characteristics could be slightly tuned to suit its touring or off-roading trait. The Terra 250 is a potential product for Aprilia India considering the country’s growing interest in adventure-tourers and low-capacity off-roaders. If launched, it will directly lock horns with KTM India’s upcoming 250 Adventure while also being an interesting alternative to Royal Enfield’s Himalayan and Hero MotoCorp’s Xpulse 200.

However, Aprilia India had previously disappointed Indian motorcycle enthusiasts by stepping away from introducing the RS 150 and Tuono 150. The motorcycles were first showcased in India back at Auto Expo 2018. At the time, the Aprilia RS 150 seemed to be a compelling alternative to Yamaha Motor India’s YZF-R15 V2.0 (now YZF-R15 V3.0). If the Aprilia Tuono 150 was introduced by now, it could have been a strong rival to the Yamaha MT-15.