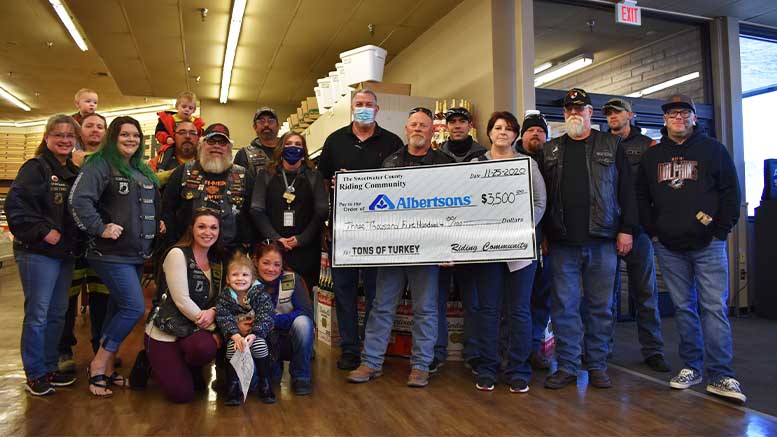 by Tyler Johnson from https://wyo4news.com

ROCK SPRINGS, WYOMING (November 27, 2020) – Motorcycle clubs in and around Sweetwater County raised $3,500 to help feed families during the holiday season.

On Wednesday, Nov. 25, members from Dead Men M.C., Boneyard M.C., Chariots of Light M.C., Unknown Saints M.C., as well as representatives from Flaming Gorge Harley-Davidson presented a check to the Albertson’s store as part of their Tons of Turkey Food Drive.

“It means a lot for the community,” said Albertson’s manager Eric Rumple. “It means everything to us to be able to give back to the community, especially this time of year.”

Kenn Boyd, a member of Dead Men M.C., said that in past years the riding community would give to the food bank. However, during this time, many people are donating to the food bank and it’s difficult for them to store the food.

Albertson’s will use the money to create meals and deliver them to the food bank so that families can pick them up and have food on their tables during the holiday.

The excess amount of proceeds will roll over into the “Santa Boxes,” which is essentially the same thing. All contributions will stay in Sweetwater County.