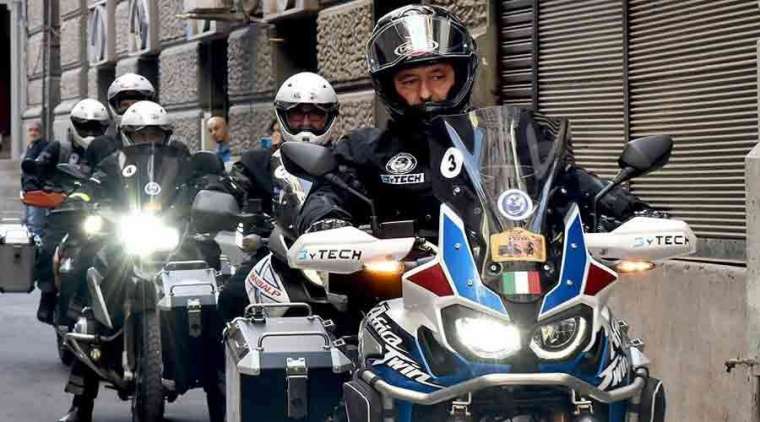 Moto for Peace is a non-profit organization founded in 2000 by Italian police officers to travel the world on motorcycles to carry out humanitarian, social and evangelistic work. The group promotes values of solidarity, friendship and cultural exchange while contributing to educational, healthcare and sanitation projects.

The organization has expanded to include active police officers from Spain, Germany, and other European countries. Their previous efforts include donating motorcycles to doctors in rural Nepal, raising money for a water purifier in Ethiopia, providing medical aid in various parts of Africa, and completing construction on an orphanage in Bolivia.

The current team is comprised of 16 Italian, German and Spanish police. They departed for Chile Jan. 29 and plan to visit Argentina, Uruguay, Paraguay, Bolivia, and Peru over the course of two months.

The mission’s purpose is to support the commitment of Catholic missionaries in South America along an 8,700 mile route, visiting the communities where the missionaries work under conditions of poverty, lack of resources and social instability.

Since their arrival in Chile, the police officers have visited homes for the elderly and orphans in three cities. They also visited the offices of the Archdiocese of Santiago and met with Archbishop Celestino Aós. In a video posted on the archdiocesan website, Aós expressed his joy at “meeting people who stand up and work for peace.”

Celestino Suárez, the vice president of Moto for Peace, told ACI Prensa, CNA’s Spanish language news partner, that the current mission is being carried out with the collaboration of the Vatican’s Dicastery for Promoting Integral Human Development. The agency learned about the group’s work in 2018 and encouraged it to visit South America again, their second trip since 2007.