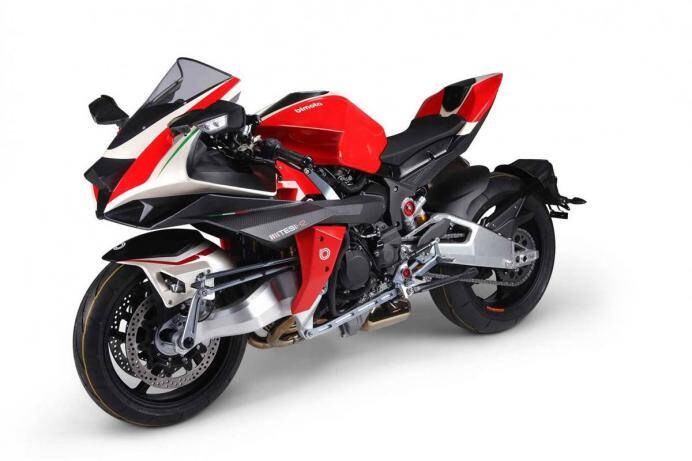 Kawasaki H2 had to be the craziest thing there was in the motorcycle world but if you hand one to Bimota, the result is something on the lines of Looney Toons’ Taz. The Bimota Tesi H2 has been revealed in its production self and will be heading for a limited production run this month. It is the first production-ready motorcycle from the Italian manufacturer since Kawasaki purchased a 49.9% share of the company last year. The Tesi H2 uses Kawasaki’s 228 bhp supercharged 998cc four-cylinder engine from the Ninja H2.

The bonkers Tesi H2 was planned earlier but had to be moved to September 2020 due to the pandemic. Things now seem on track in Rimini as Bimota have also announced that the Tesi H2 can be pre-ordered. Not just that, Bimota have also released specifications of the Tesi H2 and here’s why most are calling it bonkers.

The front and rear swingarms are made of aluminum with four inches of travel at the front and 5.11 inches at the back. The 17-inch wheels are armed with two 330mm discs at the front and a single 220mm disc at the back. For those of you who will commit to a new Tesi, deliveries of the first batch of 250 bikes will start shipping in October.