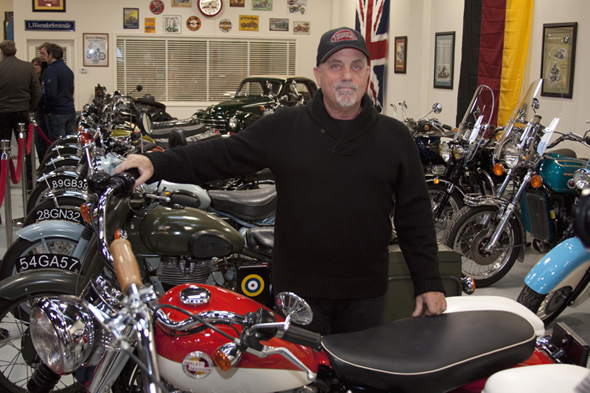 by Bang Showbiz from http://www.contactmusic.net/

Billy Joel’s beloved 12 motorcycles were trashed when a thief broke into his home over the weekend.

Bill Joel’s motorcycles were trashed when a thief broke into his home over the weekend.

The ‘Piano Man’ hitmaker called police on Monday (27.01.20) morning when he discovered someone had obtained access to his house in Long Island and damaged his property.

Nassau County police told TMZ 12 motorcycles and a home office on the property had been vandalised and it seems that the burglars smashed through a glass door leading into the garage.

It is unclear whether anything was stolen or whether Billy was at home at the time of the break-in, which took place at some point between Saturday (25.01.20) and Monday.

The 70-year-old singer – who is a known bike enthusiast and even owns a nearby motorcycle story – gave a statement to police and they are currently investigating.

Billy previously insisted he’ll never retire because he has the ”greatest job in the world”.

Asked if he’s considered retirement, he said: ”I have the greatest job in the world. You get up there, you make a lot of noise, girls scream, and you get s**tloads of money. Are you f***ing kidding me?”

But if he does decide to quit performing, the ‘Just the Way You Are’ singer already knows what he wants to happen in his final shows.

He continued: ”Now, I do have an idea for a farewell tour.

”The stage is a living-room set: couch, TV, coffee table, food. And there’s bulletproof glass between me and the audience.

”Then I come out and lay down on the couch. I grab the remote and start watching TV.

”The crowd after a couple minutes goes, ‘F**k this’, and starts throwing s**t at the glass.

”I’ll have created a bond between me and the audience where I know they will never pay another nickel to see me again.”