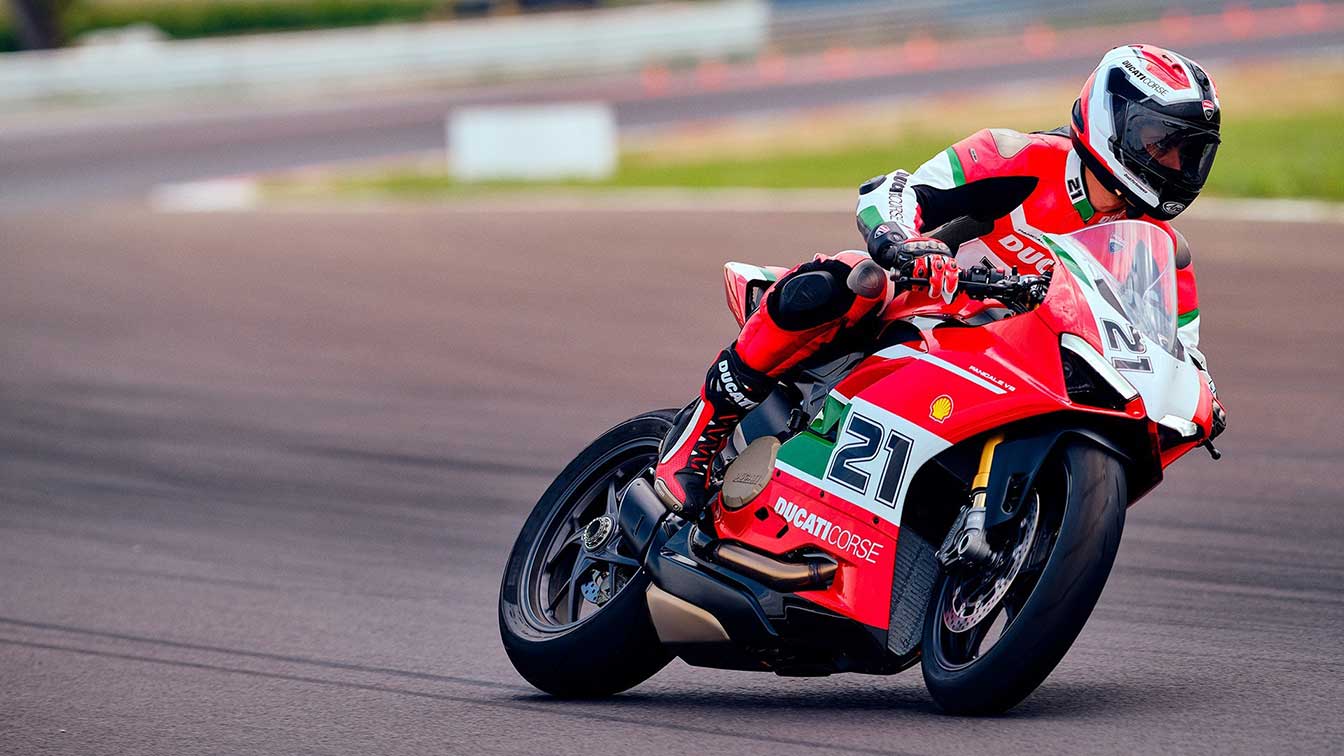 Ducati is celebrating 20 years since Troy Bayliss won his first World Superbike championship. A special edition of the Panigale V2 has been made, and it comes with several goodies on top of the regular model. It had to be painted red, and Bayliss’s race number is also on the special edition Panigale, which also features graphics inspired by the 2001 championship-winning bike.

The special edition of the Panigale V2 ditches the stock Showa and Sachs suspension system in favor of an Öhlins kit. The front is taken care of with the NX30 fork, while the rear is kept under control with the TTX36. Öhlins’ influence on this bike does not end here, as the Swedes also make the steering damper. Right next to that part, on the triple clamps, one can observe the production number of each bike.

For maximum weight reduction, the special-edition Ducati Panigale V2 1st Championship 20th Anniversary comes with a lithium-ion battery, as well as a single-seater configuration. The saddle is sewn with contrasting red stitching, and the craftspeople at Ducati also embroidered Bayliss’ race number, 21, along with the Italian flag.

Thanks to the lightweight components, the bike lost about three kilos (6,6 lbs.), adding up to 174.5 kilograms (385 lbs.) Seat height is 835 mm (32,9 inches), which may be tall for some, but being tall enough is just one of the things one must consider before buying a motorcycle in this segment.

Ducati fans will also remark a set of sport grips, a titanium and carbon fiber exhaust system, and Troy Bayliss’ autograph on the fuel tank. The latter also reminds us of each of the three years when Bayliss won the championship title.

The extras with the special edition of the Panigale V2 end here, but future owners will still have a great bike to ride. Ducati’s Panigale V2 comes with slide control, wheelie control, ABS, traction control, and various other systems to help keep the rider with both wheels on the road.

The red Italian super sport bike comes with a 995 cubic-centimeter V-twin engine called the Superquadro, with four valves per cylinder and the famous Desmodromic valves. The unit can provide 155 HP at 10.750 rpm and a maximum torque of 104 Nm (76.7 lb-ft) at 9.000 rpm. The famous Ducati V2 sound is standard.

For those of you who do not know who Troy Bayliss is, you should know that he is one of the most loved motorcycle racers of our time. He managed to get the World SuperBike Championship title three times in his career, in 2001, 2006, and 2008. To this day, Troy Bayliss is the first rider to have won a Moto GP and WSBK race in the same season.