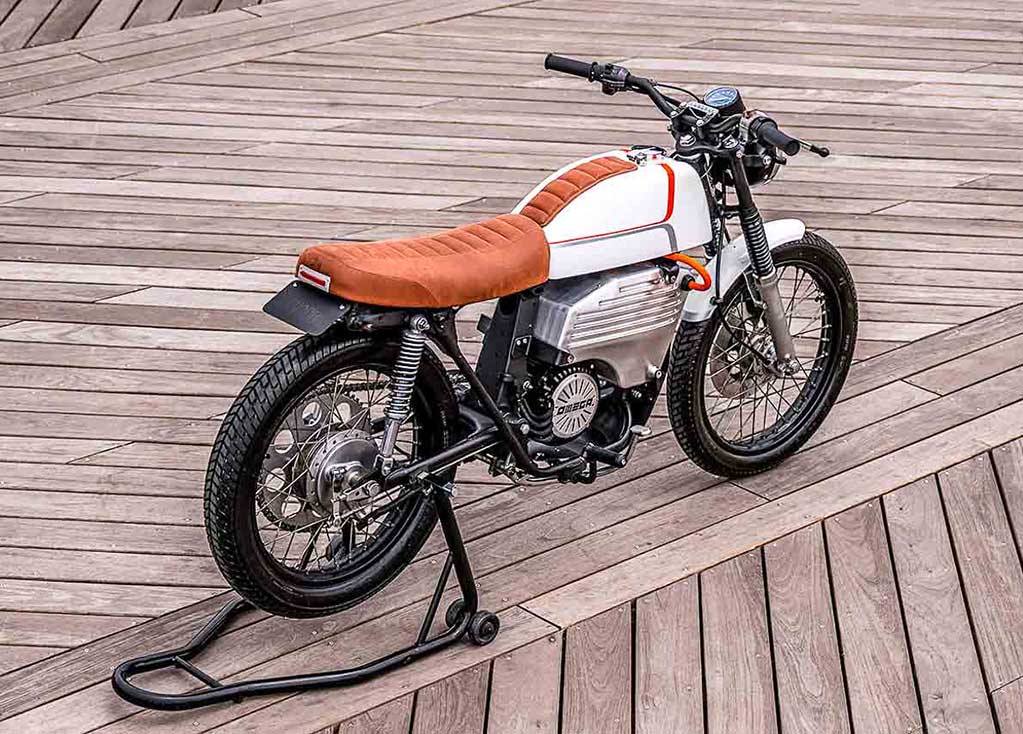 Manufacturing EVs from scratch is an uphill task in itself but it is a whole new level of challenge when one has to convert a vehicle already fitted with an IC engine. We have earlier witnessed such projects being undertaken in four-wheelers such as Land Rovers and VW Beetles but this time an electric powertrain has been fitted into a motorcycle.

An aftermarket workshop named Omega Motors, based out of San Francisco in USA, has converted a 1975 Honda CB200 into an electric motorcycle. The donor model back in 1970s and 80s was a hot-selling retro-style motorcycle with a cafe racer design. The makers of this modified prototype haven’t tried to alter the design of the motorcycle in any way.

Updated Styling
Rechristened as Omega EV200, it still retains a part-scrambler and part-cafe racer design with round headlamps, single-piece ripped seat and wire-spoke wheels lending it a retro appeal. The electric CB200 gets refurbished front forks, wheels and brakes while retaining the cable-actuated front brake and rear drum brake.

Subtle modifications have been made to the chassis in order to incorporate a battery and electric motor setup. The frame has been shortened and the welded-in rear fender has been chopped off.

The pillion footpegs have also been removed while a small part of its spine has also been cut in order to weld a mounting plate for the controller. Interestingly, the motor mounts from the original bike have been left intact while the new battery pack and electric motor are attached via a set of custom mounting plates.

Specs & Features
Speaking of specifications, the motorcycle has been fitted with an electric motor sourced from Golden Motor and raed to produce 5kW (6.7 bhp) of continuous supply and peak power of 10kW (13.4 bhp). This motor feeds energy of a 1.6 kWh battery pack specifically designed and built for Omega EV200. Omega has also added a Kelly Controls controller which has been packaged neatly under the modified fuel tank and seat.

Coming to its performance, numbers are fairly modest with a top speed of 60mph (96.5 kmph). However, the electric bike weighs only 111 kilos which is 22 percent lighter than the stock CB200. The motorcycle offers a riding range of only 48 km on a single charge while charging the battery takes five to eight hours.

There isn’t much to offer in terms of features but Omega has got the stock analogue speedometer and switches working. Most importantly the clutch lever has been repurposed to work as an analogue regenerative braking control. The most attractive addition is a small digital display to reveal battery-related information which has been covered with the same piece of leather as the custom seat.