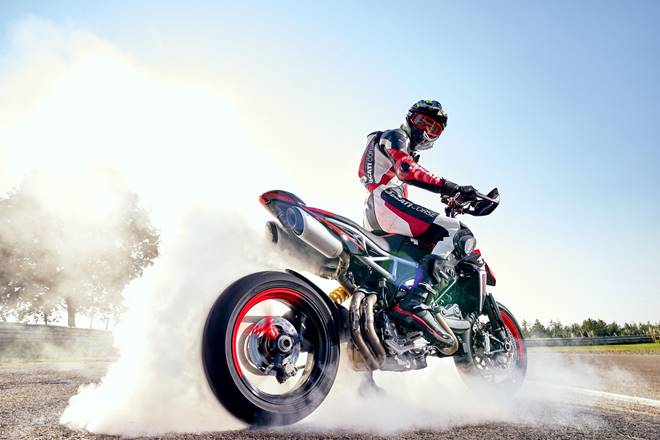 Ducati has taken the wraps off the new Hypermotard 950 RVE, which will be positioned between the entry model Hypermotard 950 and the range-topping Hypermotard 950 SP. Presented at the Concorso d’Eleganza Villa d’Este, the Hypermotard 950 RVE boasts a distinctive ‘Graffiti’ livery inspired by street art. Besides the new wacky graphics, this version also gets a standard equipment upgrade. The electronic package of the Hypermotard 950 RVE has been improved with the Ducati Quick Shift (DQS) Up and Down EVO, which is added to the features already available in the standard version – Bosch Cornering ABS with Slide by Brake function, Ducati Traction Control Evo (DTC EVO), and Ducati Wheelie Control (DWC) EVO.

The aggressive design of the bike, inspired by the motard look, revolves around the twin exhausts under the seat and the smaller superstructures that leave the mechanical components visible, including the trellis rear frame that communicates lightness and essentiality.

At the top of the Hypermotard 950 range is the Hypermotard 950 SP with racing graphics and Öhlins suspension with increased travel, Marchesini forged rims and Ducati Quick Shift (DQS) Up and Down EVO. It will be launched in July SRP of £11,750 (approximately Rs 11.23 lakh) in international markets.

The Panigale V4 Superleggera will come powered by a 998cc Desmosedici Stradale V4 engine that makes a whopping 224 hp and 115 Nm of torque, along with the option of fitting an Akrapovic exhaust (track only) and bumping up the power to 234 hp.